On 9/11 Anniversary, Remembering a Red, White, and Blue Nation Is Possible 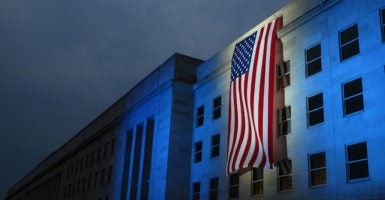 Fifteen years ago, in the wake of the terrorist assaults on the World Trade Center in New York City and the Pentagon in Washington, I wrote about the tidal wave of patriotism that swept across America.

There was an overnight surge in military enlistments by teens and young adults often dismissed as spoiled and self-absorbed. Thousands of Americans lined up to give blood.

Tens of millions of dollars in donations flowed to the American Red Cross and to the Salvation Army and other faith-based organizations.

Attendance at churches, synagogues, and mosques doubled and tripled. There was a runaway sale of American flags—one Chicago store sold 25,000 flags in one day, more than it had in all of the past year.

There were less dramatic examples of patriotism. There was the quiet eloquence of a man explaining why he risked his life to help someone buried beneath the rubble at ground zero in lower Manhattan. A fire chief choked back tears as he spoke of a priest friend who suddenly disappeared in a cloud of dust as he looked for people to comfort.

Any other nation would have collapsed under such a succession of crises, but America still stands strong.

Since then, we have been through a series of radical challenges, including wars in Afghanistan and Iraq, a Great Recession, the great expectations raised by our first ever African-American president, the emergence of new political forces like the tea party and Bernie Sanders-style socialism, an ever present and ever expanding social media, and an unprecedented presidential election that pits the first woman nominee versus the first billionaire nominee.

Any other nation would have collapsed under such a succession of crises, but America still stands strong and resolute because it rests on what the Founding Fathers institutionalized and Alexis de Tocqueville observed—a unique mix of political and economic liberty and faith in “we the people.”

As President Ronald Reagan said about the American Revolution in his farewell address: “Ours was the first revolution in the history of mankind that truly reversed the course of government, and with three little words: ‘We the people.'”

“We the people,” Reagan said, “tell the government what to do, it doesn’t tell us.”

If the people respond as they have in the past, we will have not the divided “red” and “blue” America of the mass media and political junkies, but a united red, white, and blue America resting on faith and freedom.