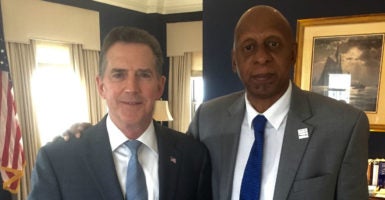 Cuban dissident leader Guillermo “Coco” Fariñas meets last year with Heritage Foundation President Jim DeMint. Attempting to raise awareness of the Cuban government’s brutality with a hunger strike, Fariñas says he is willing to give his life for the sake of Cuba’s future. (Photo: Ana Quintana)

An internationally known Cuban dissident leader and former political prisoner has been on a hunger strike for seven weeks. Attempting to raise awareness of his government’s brutality, Guillermo “Coco” Fariñas says he is willing to give his life for the sake of Cuba’s future.

Wednesday was Day 50 of the hunger strike.  A video posted by Fariñas in July, no longer online, notes that this act of political expression follows his being brutally beaten and tortured by Cuban police for inquiring about the health of a fellow dissident. In total, he has spent 11 years in prison.

Fariñas started this hunger strike, his 24th, on July 20 and it has taken a drastic toll on his health. He has been hospitalized on numerous occasions, but only after he faints.

According to his mother, if he is conscious, he will not allow medical attention. He has lost 30 pounds and his heart rate and blood pressure are low.

Many ordinary Americans are unaware of Fariñas, or el Coco as he is commonly known. Until now, the only major media sources reporting on his story have been Breitbart and Fox News Latino. Unfortunately, the mainstream media has chosen to dedicate coverage of Cuba to the recently resumed commercial flights.

Little more than a year ago, I had the incredible opportunity, along with Heritage Foundation President Jim DeMint and other colleagues, to meet with el Coco here in Washington.

We discussed how saddened he and other dissident leaders were to have been ignored by President Barack Obama, despite being personally promised by the president that Cuban dissidents would be factored into any new Cuba policy. Fariñas expressed concern that recognition and concessions from the U.S. would serve only to solidify the communist regime’s hold on power. Ana Quintana, The Heritage Foundation’s policy expert for Latin America, with “Coco” Fariñas during his visit to Washington in June 2015. (Photo: Mike Gonzalez)

His mother accompanied Fariñas on the visit to Washington, where he received the Victims of Communism Memorial Foundation’s highest honor, the Truman-Reagan Medal of Freedom. Past recipients include two notable anti-communists, Pope John Paul II and Czech statesman and dissident leader Vaclav Havel. Fariñas also is a laureate of the European Union’s Sakharov Prize for human rights advocacy.

Many have tried unsuccessfully to convince Fariñas, 54, to break what they fear may be his last hunger strike. U.S. diplomats at our new embassy in Cuba asked him to stop, but he refused until Cuban leader Raul Castro ends violence against dissidents.

Berta Soler, leader of the opposition movement Ladies in White, recently was arrested en route to el Coco’s house. Social media on the island and in the U.S. express support on Twitter and other social media with a poignant hashtag, #juntoacoco—meaning “together with Coco.”

The Cuban government has yet to issue a statement on Fariñas. According to Yale professor and Cuban exile Carlos Eire, Cuban intelligence has accessed his phone and is spreading disinformation that he has ended his hunger strike.

It is unknown how the Cuban government will respond, but some are concerned the regime may attempt to force-feed him, as it has in the past. Frances Martel highlighted how force-feeding during a hunger strike is classified as a human rights violation, because it violates political expression.

Keen on cementing Obama’s legacy, his administration has portrayed the new Cuba policy as a success. Officials highlight increased numbers of Americans traveling to Cuba and high-level bilateral visits with Cuban counterparts.

What they neglect to mention is the increasing levels of repression against anti-communist dissidents. The independent Cuban Commission for Human Rights, based in Cuba, cataloged 8,616 politically motivated arrests in 2015. In the first half of 2016, there already were 7,418 arrests. The commission estimates that 498 of these took place during Obama’s planned trip to Cuba in March.

Solidarity with democratic activists and rejection of their oppressors was a key component of America’s policy toward Cuba. That was until Dec. 17, 2014, when Obama set out to “normalize” relations.

When asked about Obama’s Cuba policy, Fariñas said: “That is why, after Dec. 17, we decided not to give up hope but to fight even stronger.”

It’s not too late for Obama, in the waning days of his administration, to choose which side of history he will be on.