Private-Sector Job Openings Are Up, but Not Thanks to the Government 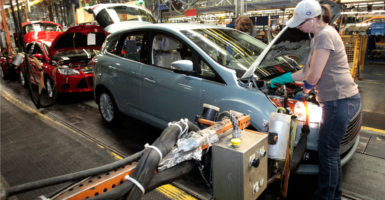 The number of total private-sector job openings now stands at 5,358,000—an all-time high since the statistic was first tracked in 2000. (Photo: Rebecca Cook/Reuters/Newscom)

The Bureau of Labor Statistics released data this week showing that the ratio of unemployed people per job opening remains at the lowest it has been since April of 2001, at 1.3.

The number of total private-sector job openings now stands at 5,358,000—an all-time high since the statistic was first tracked in 2000.

Is the government creating those jobs? Not likely. Total government job openings stood at 513,000 in July—a tick lower than June, and a step down from the high of 648,000 in April 2010.

Some loudly proclaim that government “stimulus” spending is responsible for the job creation. However, the Federal Reserve Bank of St. Louis finds in a recent report that such spending might largely be a waste of money.

The title of the report declares, “Government spending might not create jobs even during recessions.” The report’s authors conclude that the success of government spending at creating jobs has not been proven and they question whether the $840 billion spent for the 2009 stimulus bill was really worth it.

That’s a lot of spending by the ruling class in Washington without knowing if they were contributing to net job creation.

In fact, a Mercatus Center study found that “almost half of ARRA [stimulus bill] jobs in [the Mercatus study] sample went to workers hired away from other organizations and two-thirds of [the organizations surveyed] already had plenty of work to do before receiving ARRA funds.”

That’s why it is so key that it is private-sector job openings that are at new highs.

The Federal Reserve Bank of St. Louis report and others like it should be required reading in Washington before unproven methods of job creation waste more hundreds of billions of dollars.