This Union Employee Has Never Voted for His Union. Here’s What He Says About That. 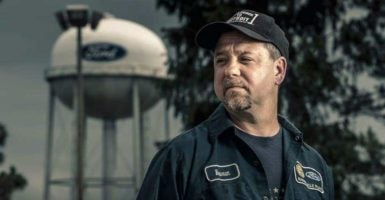 Of the 8 million unionized, private sector employees in the United States, 94 percent have never voted for their own labor union representation.

An hourly autoworker at the Ford Rawsonville Plant in Ypsilanti, Michigan, Terry Bowman, told The Daily Signal that during his 20 years of employment at Ford he has never voted for the union that represents him.

“I have no power to represent myself in any way, shape, or form,” Bowman, a UAW-Ford (United Automobile Workers) employee, told The Daily Signal. “Everything that I have and do is based on that collective bargaining agreement that I have basically been forced to accept if I want to work at Ford Motor Company.”

UAW-Ford did not respond to The Daily Signal’s phone call inquiring about elections and its collective bargaining agreement.

Unions represent 8 million workers under the National Labor Relations Act, according to research by James Sherk, a research fellow in labor economics at The Heritage Foundation. From 1973-2015, only 478,000 of these workers “voted for union representation at some point in their careers and remain employed by the company at which they voted,” the research says.

“Six percent of union members in the private sector right now in the U.S. voted for the union that represents them,” Sherk said last week during an event at Heritage. “The vast majority of unionized workers are represented by a union that they had no say in selecting. This is a problem.”

Unions even have the power to deny workers pay increases, Sherk said. For example, in 2012, a judge ordered a Pennsylvania grocer to rescind pay raises for 25 employees, because the supermarket chain did not get union approval for the raises.

“You are legally not allowed as an individual worker to negotiate with the union, even over something that we would think that ought to be intuitively obvious that you can do,” Sherk said. “Unionized workers may not accept a pay increase without their union’s permission.”

“Unions oftentimes do not like pay increases for individual workers,” as performance pay or performance bonuses can upset the seniority system, Sherk added.

Sherk’s research points out that four policies of the National Labor Relations Board cause unions to represent workers who either voted against them or never voted for their representation at all:

Bowman, the Michigan autoworker, said he has a long family history with Ford Motor Co. His father, aunts and uncles, two brothers, and cousins have all been employed by the company.

“It was a family pride thing,” Bowman said. “We loved putting America on wheels.”

Bowman went to work on the Ford assembly line in 1996 after 10 years of working as a bank officer.

“Generations of Bowmans have actually worked for Ford Motor Company, and none of us, even my father and uncles and aunts, have never had the opportunity to vote whether or not they wanted to be represented by a union,” Bowman said.

“I think it’s very unfair that union workers have to support a union that they never have voted on in the long run,” he said.

“It’s very unfair that union workers have to support a union that they never have voted on.” —@terry_bowman

Bowman said he supports the Employee Rights Act, legislation in Congress that would amend the National Labor Relations Act and would include that representatives be selected in a secret ballot election by a majority of all workers in the unit. Bowman said:

As a union represented worker, I think the Employee Rights Act represents something that grants the 16.4 million union-represented employees in the United States additional rights, freedoms, and protections that they would not have before.

Voting on union representation is “an uphill battle for employees,” Brian Hayes, a former National Labor Relations Board member, said last week at The Heritage Foundation.

“A union that is an incumbent will do everything they possibly can to avoid being ousted by the employees that represent them,” Hayes said. “They will utilize every bit of their experience and their leverage to avoid that result.”

Bowman said that Ford accepted and was organized by the United Automobile Workers labor union in 1941.

“That’s 75 years ago,” Bowman said. “Why do the votes of workers who voted to unionize 75 years ago still apply to me? Why am I still bound by their decision three generations ago?”

All workers have a right to a regular, secret ballot election to vote whether they want to be represented by a union, Bowman added.

“We can look for a better way to strengthen the relationship between workers and unions and one of the ways of doing that is holding the unions accountable to the workers,” Bowman said.