‘Socialism of the 21st Century’ Collapses in Brazil. Here’s Why It Failed. 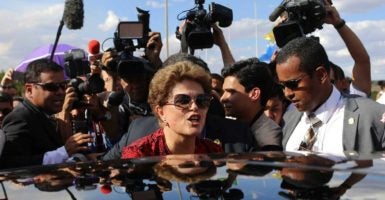 With the Senate impeachment vote to remove from office former President Dilma Rousseff, Brazilians joined a lengthening line of Latin Americans who have soured on the populist, corrupting, and impoverishing policies of “21st Century Socialism.”

Faced with its disastrous consequences, people in some neighboring countries had already turned the page and moved on. Argentina wised up late last year and installed center-right President Mauricio Macri after more than a decade of misrule by the Peronist Kirchner family.

Earlier this year, Peruvians voted for a 78-year-old center-right economist to get them back on track. And in Caracas, Venezuela, tens of thousands took to the streets demanding the removal of the brutally fascistic regime put in power by one of 21st Century Socialism’s founding fathers, the late Hugo Chávez.

In Brazil, government spending programs championed by Rousseff and her socialist mentor and predecessor, “Lula” da Silva, only managed to pull Brazilians out of poverty temporarily, through cash transfers and welfare benefits that ended up nearly bankrupting the country and plunging it into its deepest recession since the 1930s.

After squandering many opportunities during the era of booming commodity prices, these countries now face the difficult—but necessary—structural reform process to remove the real obstacles that have limited productivity growth and thwarted convergence with more advanced economies.

Many of these reforms are detailed in The Heritage Foundation’s newly published “2017 Global Agenda for Economic Freedom.”

By taking these steps under new President Michel Temer, Brazil can soon make strides to raise its scores in the annual Heritage Foundation Index of Economic Freedom and, more importantly, make sustainable improvements to the living standards of its millions of citizens.

Rousseff’s downfall was sealed when it was revealed that she and her socialist PT political party had cooked the budget books to boost vote-buying spending measures in advance of her squeaker re-election victory in the 2014 presidential election. Now, Brazilians have slammed those books closed and opened the door to greater prosperity in a post-socialist Latin America.