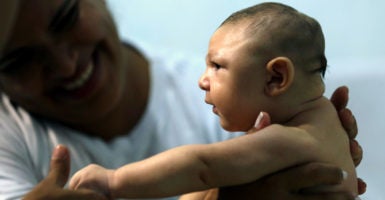 After Congress failed to pass a Zika funding bill due in part to disagreements over restricting funds from going to Planned Parenthood, pressure is on for lawmakers to reach a deal this month to address the growing crisis.

But prospects for an agreement remain bleak, with Republicans standing firm on their belief that Planned Parenthood does not need more funding to contribute to the fight against the Zika virus, and Democrats insisting that they do.

In Florida, meanwhile, one major network of federally approved health care centers says it is ready to ramp up efforts against Zika, funding or no funding.

“We can handle it,” Tiffani Helberg, spokeswoman for Community Health of South Florida Inc., told The Daily Signal. “We have enough physicians and nurses and medical experts and health centers to handle anything.”

But, Helberg added, those centers always can use more money.

As Democrats and Republican lawmakers negotiate, Planned Parenthood has insisted that its organization is critical in the fight against Zika, and therefore should be included in any Zika funding bill.

“Often we are the only provider that someone will see all year and we are the front line of defense when it comes to battling Zika,” Dawn Laguens, executive vice president of Planned Parenthood Federation of America, said during a press conference on June 30 after Senate Democrats blocked the $1.1 billion Zika measure.

In reality, clinics affiliated with Planned Parenthood, the nation’s largest provider of abortions, are limited in the services they can provide in the fight against Zika.

In Puerto Rico, for example, Planned Parenthood is running an educational campaign, providing condoms and birth control, and informing women of their options if they do get pregnant while being infected with the Zika virus. If a woman believes she’s infected with the virus, she must go elsewhere for testing and treatment.

The $1.1 billion measure that already passed the House but failed in the Senate, Laguens said, “does not provide necessary planning for family planning resources in line with [Centers for Disease Control and Prevention] recommendations.”  The Planned Parenthood official added the bill “does not give money to the providers best suited to help fight the Zika virus, like Profamilias in Puerto Rico.”

Zika, which has hit Puerto Rico the hardest of all states and U.S. territories, is transmitted through mosquitoes and also sexually. The virus poses the greatest risk to pregnant women, as it’s known to cause microcephaly in as many as 13 percent of infants, which results in a baby’s head to be unusually small and its brain to be underdeveloped.

According to its website, Profamilias operates two women’s health care clinics in Puerto Rico under the umbrella of the International Planned Parenthood Federation.

When President Barack Obama made his $1.9 billion Zika funding request back in February, he did not specifically ask Congress to fund Planned Parenthood.

Instead, the Zika bill currently being negotiated would increase government funding for the 13 preventative clinics in Puerto Rico that already provide care through the Medicaid program. In addition, the bill calls for a 700 percent funding increase for community health centers across the United States.

According to the Centers for Disease Control and Prevention, Puerto Rico currently has 13,791 locally acquired Zika cases. Zika-infected mosquitoes also have made their way to Florida, where 35 people have been locally infected, in addition to 507 travel-related cases involving state residents.

Centers for Disease Control Director Thomas Frieden warned last week that the federal government is running out of resources to fight the virus, pressuring Congress to pass a spending bill.

“We don’t have the resources we need to mount the kind of robust fight against the disease,” Frieden said Aug. 30 during a Twitter town hall. “Without additional funding we will not be able to fully understand the impact of Zika.”

Since failing to pass a Zika funding bill this summer, Republicans and Democrats in both the House and the Senate have been blaming each other.

“Democrats would prefer to filibuster the bill [in the Senate] if there is no funding specifically for Planned Parenthood,” Don Stewart, a spokesman for Senate Majority leader Mitch McConnell, R-Ky., told The Daily Signal via email. “They’ve filibustered the bill twice already and I expect they will again.”

“Democrats have been calling for bipartisan negotiations for months, but instead of coming to the table, Republicans are holding a vote on a bill they know will fail,” Adam Jentleson, deputy chief of staff for Senate Minority Leader Harry Reid, D-Nev., said, according to CNN. “Once this partisan exercise is over, we hope Republicans will finally engage in real negotiations to address this critical issue.”

The Daily Signal contacted Reid’s office for further comment, but they did not return the request.

The Heritage Foundation’s Paul Winfree, a budget expert, argued in an August interview that the Obama administration could shift up to $2.2 billion from an account established to counter the Ebola virus. But as of Tuesday, Congress was working toward reaching a deal on the Zika bill.

The Daily Signal contacted Planned Parenthood, but the group did not return the request for comment.

Federally qualified health centers each year provide comprehensive health care, including obstetrics and gynecology services, at little to no cost to millions of Americans who are uninsured, jobless, or among the working poor.

According to the Centers for Medicare and Medicaid Services, federally qualified health centers provide more than three times the total number of services that Planned Parenthood provides. “In federally qualified health centers, you actually have medical professionals on staff—doctors and nurses on staff—to diagnosis and treat illness,” Mattox said, adding:

That’s what they’re there for. Planned Parenthood does not have that. They have people who can provide birth control, and can provide other women’s health screenings in some cases, but they don’t have medical professionals that can actually provide primary care services. And that’s what you need in a public health crisis, the ability to provide primary care services, determine whether someone has Zika, and advise them on how to not get Zika.

Currently, 13,540 clinics provide comprehensive health care for women in the U.S., compared with 665 Planned Parenthood locations, according to data collected by Alliance Defending Freedom and Charlotte Lozier Institute, the education arm of the Susan B. Anthony List, a pro-life advocacy group.

In Puerto Rico, where the Zika virus is hitting especially hard, 20 federally qualified health centers exist, according to the Kaiser Family Foundation.

Profamilias, operating under International Planned Parenthood Federation, runs two permanent clinics in Puerto Rico in addition to 11 “service points” there, according to its website.

The Daily Signal sought comment from Profamilias, but it did not reply.

‘Not Overwhelmed at This Point’

In southern Florida, where the number of Zika cases continues to rise, a spokeswoman for one federally qualified health care network said its centers are ready and prepared to take on more Zika cases.

“We have seen some Zika patients and we’re working with the Health Department to handle the situation,” said Helberg, vice president for communications and development for Community Health of South Florida Inc. “We’re not overwhelmed at this point. I think everything’s being handled appropriately.”

Community Health of South Florida Inc. operates 11 centers covering the Florida Keys to Miami, where the majority of domestic Zika cases have been reported.

Helberg said she did not want to address the specific issue of Planned Parenthood and whether community health centers are more deserving of taxpayer funds to fight Zika.

But she said that if a pregnant woman goes to one of its centers to get tested for Zika, “we’ll take care of them throughout their pregnancy.”

“We treat everyone—children, adults, elderly, you name it—women, men, and we provide a host of services to them,” she said. “We are here to treat them with whatever needs they have, in any of the areas that we have services.”

Mattox, the lawyer with Alliance Defending Freedom, argued that health care centers such as the network in South Florida unquestionably are better suited to receive federal Zika funds.

“If Planned Parenthood wants to address this problem, then, unlike federally qualified health centers, they are well-equipped to do that,” the lawyer said, adding:

In the last 10 years, Planned Parenthood has brought in over $750 million in excess income and they’re spending well over $20 million this election season in order to influence the outcome in November. So they have plenty of resources at their disposal if they want to pitch in and do what federally qualified health centers and many other nonprofits are doing without having the large bankrolls to be able to support that.

It makes a lot more sense for our taxpayer dollars to be supporting the efforts of the entities that don’t already have the billion-dollar reserves and actually need our resources to be able to provide those services.

More for Doctors and Hospitals

And while financially prepared to face the growing Zika crisis, Helberg said, the community health network of health centers in Florida would welcome more funding.

“We’ve had a lot of cutbacks in funding as of late and that is hurting us as a community health center,” she said. “We are the No. 1 resource for many people, whether you’re insured or uninsured, whether you’re homeless, whether you’re undocumented, we will provide you health care services. And without adequate funding, that’s difficult. Zika or no Zika.”

Prior to the Zika outbreak, conservatives had been calling on Congress to strip Planned Parenthood of its $500 million in taxpayer funding and instead divert that money to health care centers such as the network that Helberg helps to operate.

The effort, which ultimately failed, came after the Center for Medical Progress, a group that opposes abortion, released a series of undercover videos showing high-ranking Planned Parenthood officials discussing the sale of tissue from aborted babies. Planned Parenthood has denied illegal activity.

Some health care experts warned Congress that stripping Planned Parenthood of its taxpayer dollars could hurt the millions of patients the organization serves each year.

This time around, however, Republicans aren’t asking to take away money from the nation’s largest abortion provider—they’re arguing against giving it more.

The measure the Senate will take up again this week, which already passed in the House, “actually increased funding for health care,” Stewart, the spokesman for McConnell, said. “And yes, it goes to doctors, hospitals, community health centers.”

Whatever the outcome, Helberg said she remains optimistic about community health centers’ ability to step up if the Zika crisis gets worse.

“I think we’re equipped,” she said. “We’ve withstood many challenges—bird flu and all the other horrible things that have come through—and that’s the role of a community health center: to be here through good and bad times. We can handle it, we have enough physicians and nurses and medical experts and health centers to handle anything.”