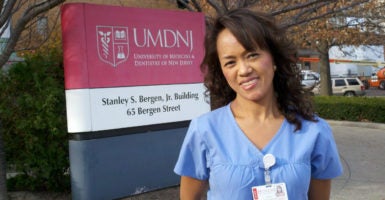 Fe Vinoya says she became a nurse to help others, not to do harm. She supports legislation protecting her and others from being forced to take part in abortions. (Photo: Alliance Defending Freedom)

A pastor and a nurse want Congress to pass legislation that would allow Americans the freedom to opt out of the abortion process.

But that is exactly what the state of California is doing, Lewis told The Daily Signal in a phone interview.

Lewis said it is “shocking” that the state Department of Managed Health Care would force his 1,000-member church, against its deeply held religious convictions, to cover abortion in the health plans of roughly 100 employees.

“We’re stuck in this horrible place,” Lewis told The Daily Signal. “We’re essentially being coerced by the state to violate our conscience.” Lewis spoke on Capitol Hill at a House forum in July on conscience rights, urging Congress to pass the Conscience Protection Act.

Among about eight others who spoke was a nurse of 26 years, Fe Esperanza Racpan Vinoya.

“I became a nurse to help people, but not to do harm,” Vinoya said.

In 2014, the state of California issued an order requiring all health insurance plans to cover abortion, without a religious exemption.

Lewis said he and his congregation believe life begins at conception, and covering abortions on employee health plans violates the church’s core tenets.

“I can’t believe that we as a church, with this fundamentally, deeply held conviction of ours, can be put in a position to violate our conscience like this,” Lewis said. “We felt like we were over a barrel.” He added:

“I’m really troubled by the idea that the state can just say it doesn’t matter, that your religious freedoms don’t matter to us,” Lewis said.

The House of Representatives passed the Conscience Protection Act, introduced by Rep. Diane Black, R-Tenn., by a vote of 245-182 the week after the forum where Lewis and Vinoya spoke.

The legislation would prohibit the federal government and state or local governments that receive federal health dollars from penalizing or discriminating against health care providers for refusing to “perform, refer for, pay for, or otherwise participate in abortion.”

The legislation is the House’s amended version of an originally unrelated Senate bill sponsored by Sen. John Thune, R-S.D. The Senate now must vote on the amended bill.

President Barack Obama is expected to veto the measure should it win final passage in his final five months in office.

The Obama administration “strongly opposes” the legislation, according to a statement from the Executive Office of the President.

“This bill would unduly limit women’s health care choices by allowing a broadly defined set of health providers (including secular sponsors of employer-based health coverage) to decline to provide abortion coverage based on any objections,” the statement says.

Donna Crane, vice president of policy at NARAL Pro-Choice America, described the Conscience Protection Act as legislation that “lets even more people get in between you and the health care you choose.” Vinoya, the veteran nurse, told The Daily Signal that she doesn’t want to be forced to participate in abortions.

About five years ago, Vinoya was part of a group of 12 pro-life nurses who sued the University of Medicine and Dentistry of New Jersey over a hospital rule that would force all nurses to assist in abortions.

“No one actually knew what to do because the management was saying to us that we were going to lose our job or … be transferred to another unit [for not cooperating],” Vinoya said.

It was a “horrible feeling” for everybody, she said.

The university’s hospital in Newark said at the time that it was not directly forcing nurses to participate in any abortions.

In her remarks July 8 during the House Energy and Commerce Committee’s Forum on Protecting Conscience Rights, Vinoya said:

Participating in the destruction of human life is not only a violation of my religious convictions as a Christian, it also conflicts with my calling as a medical professional to protect life, not to end it.

After a court hearing in 2011, the New Jersey hospital agreed not to force the pro-life nurses to assist in abortions.

Alliance Defending Freedom, a Christian legal aid group, represents Lewis and his church as well as Vinoya and the other pro-life nurses.

“I think that the [Conscience Protection Act] should be passed for professionals like me who are not fortunate enough to have people … who have selflessly helped us get through this ordeal and saved us our jobs,” Vinoya told The Daily Signal.

Lewis said he wants to stand up for the rights of unborn children.

“The most voiceless people in the culture are the unborn,” Lewis said. “We want to be a part of not further propagating abortions and allowing that to happen, but actually trying to see [abortions] reduced [and] restricted.”