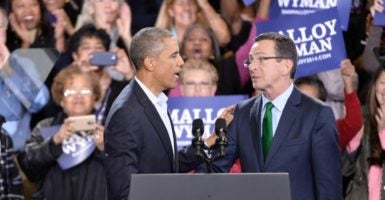 The clash over free speech and campaign finance has erupted in Connecticut, as two Republican state legislators have refused to settle a case with the State Elections Enforcement Commission.

Connecticut is one of at least three states that have a “clean campaign” system, in which a candidate collects very small donations of $5 from a large pool of people to qualify for a near fully-funded campaign by the taxpayer. In all, 13 states have some form of public financing for state elections, according to the National Conference of State Legislatures.

The state’s sanction against the legislative candidates was for mentioning Connecticut Gov. Dan Malloy, a Democrat, by name in mailings that referenced “Malloy’s bad policies” and “Malloy’s tax hike” for their own races in 2014, when Malloy was also on the ballot. The lawmakers used similar reference in campaign literature this year and in 2012, but face no sanction because Malloy appeared on the 2014 ballot.

“A government that funds speech will seek to control that speech.” @campaignfreedom says.

“I don’t know how you can be a sitting state legislator and not mention the governor’s name,” Markley told The Daily Signal in a phone interview. “This is not in the statute; this is an interpretation by the [State Elections Enforcement Commission].”

The State Elections Enforcement Commission will have a hearing on the matter in September, Markley said. He said he will challenge in state court if necessary on constitutional grounds. As a matter of being competitive in the state, he said candidates must take public funding. But, he believes putting the government in charge of financing campaigns is the problem.

“If it weren’t for the state funding campaigns, this wouldn’t have arisen as an issue,” Markley said. “It is frustrating for liberals to see government funds used to criticize them for a change.”

“What Connecticut is trying to do is both ridiculous and likely unconstitutional,” Keating told The Daily Signal in an email.

Still, Keating added that politicizing a program was likely inevitable once the state has the purse strings to campaign funding.

“A government that funds speech will seek to control that speech,” Keating said. “Bureaucrats who control the funding will try to penalize candidates for trivial violations.”

Keating said such a case has less to do with the Citizens United precedent on campaign finance than it would have to do with legal precedent barring government agencies from placing unconstitutional restrictions on receiving government money.

However, this matter typically comes up in the areas of welfare or in government contracting and not campaign funding, Keating said. Thus, he said there is almost no precedent for the Connecticut controversy.

Connecticut House Speaker Brendan Sharkey, a Democrat, defended the commission’s actions in a letter to the editor responding to a Hartford Courant columnist’s criticism of the sanctions.

“When candidates voluntarily sign up to receive taxpayer dollars to run their campaigns, they swear to abide by the law,” Sharkey wrote. “Instead, state Republicans in 2014 coordinated to violate the rules—including the protagonist in Mr. [Kevin] Rennie’s column—and most of them have already admitted their violations and settled their cases.”

Connecticut adopted a bipartisan public financing law in 2005 following a major corruption scandal. The law was passed by a Democratic-controlled legislature and signed by a Republican governor. In October 2014, the state election agency issued an advisory opinion warning candidates for the legislature to avoid referring to candidates in the governor’s race.

The state agency asserted that referring to candidates would have been permissible if the cost of the campaign had been shared by either the state Republican Party or the 2014 campaign of Republican gubernatorial candidate Tom Foley.

The state election agency brought a case against 16 Republican candidates who mentioned Malloy by name during their 2014 campaigns. Most of those Republicans signed a settlement agreement, admitting an election violation in exchange for dodging a civil penalty. However, Markley and Sampson refused to sign, asserting that empowering the agency would violate the First Amendment.

“For me, this is a clear violation of my First Amendment rights, and an overt restriction on free speech,” Sampson wrote in an op-ed in The Southington Observer newspaper. “The government should not be able to restrict the issues we campaign about in a free election.”

Two other states that provide near-full state funding for all state offices, including the legislature, are Maine and Arizona.

Hawaii also provides a matching funds program for its legislative candidates, which provides tax dollars to candidates who cap their spending. Minnesota defunded its program in its last state budget, according to the Center for Competitive Politics.

Keating, president of the center, said candidates in most of the states do not use the public funding program any longer, largely because it inhibits their ability to campaign. So, he said, it’s doubtful a dispute similar to what is happening in Connecticut has occurred elsewhere.

The states of Florida, Maryland, Massachusetts, Michigan, Rhode Island, and Vermont all provide some form of public financing to candidates for governor and lieutenant governor. Elections to the state Supreme Court are publicly funded in New Mexico and West Virginia.

The Connecticut public finance system could be on shaky legal footing because of this case, said Hans von Spakovsky, senior legal fellow at The Heritage Foundation.

“If providing public funding for candidates is being used as grounds to prevent criticism of candidates in other elections or of the governor then that would be a horrendous infringement on the First Amendment and probably the Supreme Court would throw that public financing system out,” von Spakovsky told The Daily Signal.