She Never Committed a Crime. But Albuquerque Seized Her Car, and Won’t Give It Back. 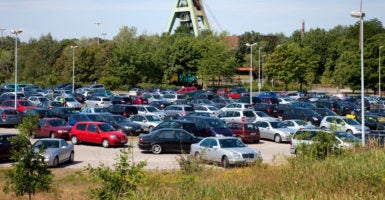 From 2010 to 2015, the city of Albuquerque seized 8,369 vehicles and collected more than $8.3 million using civil forfeiture. (Photo: Caro/Rupert Oberhäuser/Newscom)

Arlene Harjo had let her son borrow her car time and time again, and never had any issues.

But in April, Arlene’s son, Tino Harjo, was arrested for drunk driving, and police seized the car he was driving.

The 2014 Nissan Versa belonged to Arlene, 56, and now she is forced to maneuver through the civil forfeiture system in Albuquerque, New Mexico, to get it back.

Tino did have a history of driving drunk. He was convicted in 1998 and 2001, and was arrested for drunk driving in 2009. He was never convicted for the latest offense, though.

In the years following her son’s arrest, Arlene said that her son’s behavior had changed. He cleaned up his act, graduated with a technical degree in 2011, and moved in with his mother.

Driving under the influence, Arlene said, was “not an option” for her son.

Arlene’s trust in her son grew over the last seven years, so she began to let Tino use her car from time to time with her permission.

Five months ago, Tino asked his mother if he could use Arlene’s Nissan Versa to go to the gym with a friend.

Since Arlene didn’t need to be at work, she said yes, and her son left the house around 2 p.m., she recalled.

But by 10:30 that night, Tino hadn’t returned, and Arlene began to worry.

Tino, Arlene later learned from one of his friends, had not gone to the gym, but to Clovis, New Mexico, to visit his girlfriend.

She heard from Tino the next day, at around 11:30 in the morning.

He had been arrested for driving under the influence, Arlene said her son told her, and was in jail.

Police towed Arlene’s 2-year-old Nissan Versa, and a few days later, the city of Albuquerque sent her a letter saying they were seizing it using civil asset forfeiture.

Arlene was never charged with a crime.

“What the city is doing is against my constitutional rights,” she told The Daily Signal. “It’s not a crime to let someone borrow your car.”

A History of Vehicle Seizures

Under civil forfeiture laws, law enforcement at the local, state, and federal levels have the power to seize property if they suspect it’s tied to criminal activity.

Law enforcement argue the tool is vital for curbing drug trafficking and money laundering. But in recent years, innocent property owners have been caught in the forfeiture system, which requires them to prove their seized cash, cars, and houses weren’t tied to a crime.

But the city of Albuquerque has continued to seize property through its vehicle forfeiture program, which, under a city ordinance, allows the city to take a car driven by someone arrested on suspicion of driving under the influence if they’ve been charged with drunk driving before or were caught driving with a suspended license because of a former drunk driving charge.

Two state lawmakers and the Institute for Justice, which is representing Arlene, attempted to challenge Albuquerque’s forfeiture program last year, but the court said the lawmakers didn’t have standing.

From 2010 to 2015, the city seized 8,369 vehicles and collected more than $8.3 million under the ordinance, according to the Albuquerque Journal.

In 2014 alone, the city seized more than 1,200 cars, totaling more than $1.2 million in forfeiture proceeds, according to an Albuquerque Police Department’s report from that year.

Budget documents from the city show that the city of Albuquerque prepares for revenue brought in through the vehicle forfeiture program.

According to its 2016 budget, the city—under a section titled “performance measures”—set a target of 1,200 vehicle seizure hearings for 2016, along with a target of 625 vehicles auctioned and 350 released through agreements with property owners.

Rob Johnson, a lawyer at the Institute for Justice who is representing Arlene, said that Albuquerque’s forfeiture program demonstrates how law enforcement are focused on the revenue civil forfeiture brings in, as opposed to ensuring that criminals are denied access to their ill-gotten gains.

“The people who are taking these cars are literally having their salaries paid through these forfeitures,” Johnson told The Daily Signal. “That creates an incredible financial incentive to bring in property from people who haven’t been accused of doing anything wrong.”

The Albuquerque city attorney’s office did not return The Daily Signal’s request for comment.

After the city notified Arlene of its intent to take her car, she appeared at an administrative hearing before Stanley Harada, the city’s chief hearing officer.

Property owners must pay $50 for the hearing and are subject to $10 a day in storage fees for impounded cars.

Harada, billed as a neutral party, created the city’s forfeiture program in the 1990s and has spoken about the program’s design of returning forfeiture proceeds directly back to the program.

At the hearing, Arlene said Harada scolded her for letting her son borrow the car, especially since he had a history of drunk driving.

“What I’m being penalized for is letting my son borrow my car because he had a prior DWI,” she said. “They made me feel like a criminal.”

The city originally offered Arlene a deal: transfer ownership of the car to the government—and continue to pay off the $10,000 remaining on her loan—or pay $4,000 to the city and have a boot on her car for 18 months.

Arlene said she couldn’t afford the $4,000 and instead decided to take her case to the Bernalillo Second District Court, where the city filed a forfeiture petition.

“For me, it’s been very stressful. It’s been a nightmare,” she said. “You’re paying for a car and paying all this money [for the loan] and insurance. I have a hard time wondering if I’m ever going to get the car back.”

Not only are Arlene and the Institute for Justice challenging the city’s seizure of Arlene’s Nissan, but the public interest law firm is also challenging the legality of Albuquerque’s vehicle forfeiture program, both as it relates to New Mexico’s civil forfeiture laws but also constitutional protections.

The U.S. Supreme Court has warned that constitutional issues may arise when the government takes property for financial gain, and Johnson said Arlene’s case is an illustration of that at play.

“That’s exactly what you have here,” he said. “The incentive is what’s causing them to go after innocent people like Arlene.”

“There’s an incentive,” Johnson added, “to take as much property as possible and from people who really aren’t the ones law enforcement should be going after.”