Save the Filibuster and Save the Senate From Partisanship 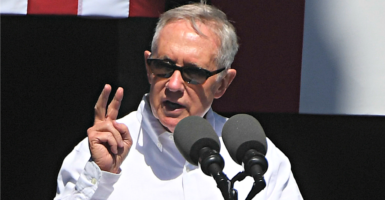 The filibuster is under attack again, this time by Senate Democrats who are hoping to win back that chamber as well as the White House in November.

Carl Hulse, chief Washington correspondent for The New York Times, reported Wednesday that Senate Minority Leader Harry Reid wants Democrats to “move to curtail the filibuster” if they win both the White House and the Senate “only to run up against persistent use of the tactic by Republicans.”

‘Unless after this election there is a dramatic change to go back to the way it used to be, the Senate will have to evolve as it has in the past,’ Mr. Reid told me, referring to a former tradition of rarely mounting filibusters. ‘But it will evolve with a majority vote determining stuff. It is going to happen.’

Senate Democrats are looking at the polls and have decided that, if Democrats are successful in winning both the Senate and the White House, the Senate rule that allows extended debate, Rule 22, would need to be abolished.

So what Reid is saying is that if Democrats win the Senate, they should abolish the filibuster to squelch debate and expedite a left-wing agenda, including tipping the Supreme Court to the far left.

But what is left unsaid is that if Democrats don’t regain the Senate majority, which they lost to Republicans in 2014, they will be motivated to defend their right to filibuster in order to obstruct policies they oppose.

“Filibuster for Me, but Not for Thee” should be the motto of Senate Democrats. This is partisanship pure and simple.

The Senate is unique. Over the long history of this nation, it has developed a tradition of being the chamber of the legislative branch that protects the idea of extended debate and the power of individual senators to amend legislation.

Making it easier for the leadership of one party to end debate in the Senate not only would amass power in that leadership but take power from individual senators. It also would give the party in power complete control of the Senate; strip the minority party of the power to use the storied filibuster to leverage compromise and votes on amendments.

Abolition of extended debate runs contrary to Senate tradition and would transform the institution into a smaller version of the House of Representatives. The Senate would be run by strict majority rule.

Any attempt at so-called “filibuster reform” would be a mistake and lead to more divisiveness and partisanship in Washington. It also would create an America where the party in power can transform our laws dramatically, making them temporary and subject to the will of fleeting majorities in Congress.

Reid, as Senate majority leader in 2013, used the “nuclear option” to abolish the filibuster for presidential nominations for the executive branch and for the judiciary except for those to the Supreme Court.

The Nevada Democrat did this by having his Democrat caucus vote that filibustering presidential nominations was unconstitutional. He was factually wrong.

As I wrote in a January 2011 paper for The Heritage Foundation titled “The Filibuster Protects the Rights of All Senators and the American People”:

The Senate’s rule is constitutional under Article I, Section 5 of the Constitution: ‘Each house may determine the rules of its proceedings.’ The Senate has passed many rules, points of order, and budgetary temporary points of order that require a supermajority to proceed on legislation. Under the Constitution, it can change its rules, and no provision in the Constitution gives another body the authority to strike down the filibuster or any other Senate rule …

Senate Republicans had set the table for this power grab when they pushed in 2005 for a “constitutional option” to abolish filibusters to block presidential nominations.

At the time, Republicans were pressing for the confirmation of President George W. Bush’s judicial nominations and were willing to toss aside Rule 22 to load up the bench with a few conservatives. Many regretted that ploy when Reid used the same logic and deployed Republican talking points in 2013 to make the argument for expediting liberal President Barack Obama nominees to the federal courts.

As the new Senate minority leader in 2005, before Republicans lost the majority in the 2006 elections, Reid vowed: “I am going to do everything I can to preserve the traditions and rules of this institution I love.”

A little-known senator from Illinois, Barack Obama, argued that same year: “If the majority chooses to end the filibuster, if they choose to change the rules and put an end to democratic debate, then the fighting, the bitterness, and the gridlock will only get worse.”

So, the evidence shows the party in power in the Senate is for some version of “filibuster reform,” and the party out of power wants to preserve the right of the minority and individual senators to participate in the deliberative process.

The bottom line is that the rules forbid what Republicans attempted in 2005, what Reid did in 2013, and what Democrats are contemplating for next year should they retake the Senate.

There is no way for Democrats to implement Reid’s plan without violating the Senate rules and the Constitution, which allows the Senate to make its own rules.

Reid, who is retiring, won’t be back in early January, when the Senate is sworn in for the 115th Congress. Here’s hoping the new and returning senators will toss aside his latest plan to curtail the filibuster.