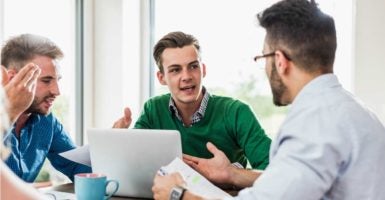 The phrase “income inequality” has a lot going for it. It’s catchy and memorable, and “inequality” breeds an immediate emotional response—contempt for the existence of an unfair policy and outrage that people might support it.

Those who cry out in favor of ending it have successfully packaged their indignation as a pep rally for the masses; those who cry out against the existence of “income inequality” are seen as selfish and uncaring.

That’s quite a narrative to change, but it’s not impossible. They might have a good phrase, but you have a great argument.

Building on the strategies we’ve outlined in previous weeks, here’s how you can have a conversation with a liberal about “income inequality”: It may be easy to dismiss someone who is preaching from an economic handbook that’s a few shades closer to socialism than you’ll ever be. But don’t throw the baby out with the bathwater when talking with someone about “income inequality.”

More than likely, the common ground here is that you, on both sides of the argument, want everyone to have an equal chance at living the American dream. That’s a good, solid piece of common ground if your aim is to see that no one is unfairly disadvantaged.

Most important is to expose the myth that the pie is only so large and the rich get rich at the expense of the poor. The best way to do so is by using examples with a focus on the issue of income mobility—or, in other words, are we making it easier for all people to climb the economic ladder?

Those beating the drum of income inequality to the tune of the rich paying their “fair share” often neglect the fact that the “rich” includes small business owners (by the way, usually not millionaires or even close). The more money small business owners have to pay in taxes to the government, the less money they can pay their employees, which leads to layoffs and/or the closing of businesses. And fewer jobs help no one, least of all those struggling to make ends meet. If you know of a business in your community that’s closed its doors because of too-high taxes, talk about it. It will resonate with those who want to stand up for local businesses.

Another good example points to the real reason the poor remain poor—burdensome regulations that make it difficult to start businesses. The Daily Signal highlighted this issue a couple of weeks ago. All Lata Jagtiani wanted to do was make an honest living using her skill of eyebrow threading, but due to unnecessary regulations in her state requiring hours of training for something she already knew how to do, she was ultimately prevented from serving her clients. In the name of “safety,” Jagtiani wasn’t able to make a living and a valuable service was withheld.

While the words “income inequality” aren’t threatening on a piece of paper, we know the phrase means something entirely different in political conversation since being hijacked by the big government side. Using this short phrase in a void isn’t a bad thing—but we all know we aren’t in Kansas anymore, Toto.

If you’re trying to fight the bad policy that stands behind the phrase “income inequality,” a good place to start is to use different language—language that speaks to the heart of what you’re trying to say.

Use phrases like “equal opportunity,” “hard work,” or “achieve the American dream” to better illustrate your point—it’s more effective to give someone the opportunity to succeed instead of handing out freebies. Also, talk about making it easier for all people to climb the economic ladder (ahem—income mobility) as a way to help your audience better visualize what you are talking about.

So, don’t shy away from a topic that can be tricky to navigate. Embrace the common ground of the American dream, use examples that show government interference is causing the poor to stay poor, and use the right words to unify instead of polarize.