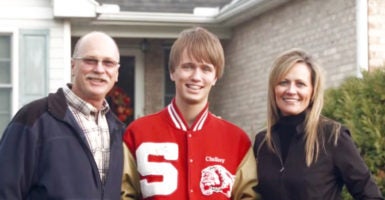 Jake Chalkey, pictured with his mother and father, was born with a brain malformation and suffers from life-threatening seizures. Medicaid stopped covering his medicine after Illinois cut $1.6 billion. Audits later found that thousands of people, including some who were dead, were wrongly on the Medicaid rolls. (Photo: Christine Chalkey)

Born with a brain malformation, Jake wasn’t supposed to live past 2 years old.

He suffered from life-threatening seizures, which would be his downfall, doctors said, and it took years for medical professionals to formally diagnose the young boy with a condition they didn’t even have a name for.

Finally, when he was between 10 and 11 years old, a doctor at the University of Chicago nailed down a diagnosis—bilateral periventricular heterotopias with hippocampal malformation and cerebellar hypoplasia.

Jake, who lives with his family in Streator, Illinois, is only one of 18 in the world with this brain malformation, and he is the oldest living person with this disorder.

To control his seizures, Jake takes a drug called Keppra, which cost his mother, Christine, and father, Gary, $1,200 if they paid out of pocket. Today, as doctors have upped Jake’s dosages, they’d pay more than $1,800.

The family’s insurance only covers the generic version of the drug, but during the few times Jake’s pharmacy has mixed up the generic with the name brand, he’s landed in the hospital.

For two years, Christine headed to her local pharmacy and picked up her son’s prescription without issues. But in July 2012, Christine learned Medicaid would no longer cover Jake’s medicine.

So Christine set to work searching for answers as to why the state would no longer assist her developmentally disabled son.

She found her answer from a state worker who told Christine that the Illinois Legislature voted to cut $1.6 billion from Medicaid to keep the program from going bankrupt.

As a result, children like Jake couldn’t get the medicine they needed.

For two months, Christine and her husband paid for their son’s medicine on their own, maxing out their credit cards.

During that time, Christine began to meet with her state legislators in hopes of learning what was putting the strain on the Medicaid budget.

She didn’t have to wait long for an answer.

In 2013, Maximus, a Virginia-based company, audited Illinois’ Medicaid case files. By the beginning of September 2013, the company recommended the state remove 136,143 cases. Illinois officials removed more than 75,707 cases from the Medicaid rolls that year.

Some of those cases involved enrollees who didn’t respond to the state’s inquiries. Others involved beneficiaries who were no longer eligible for Medicaid because of changes to income or they moved out of state.

And thousands of people enrolled in the program were dead, costing the state $12 million.

“Taxpayers don’t want to see their hard-earned tax money going to things like that,” Christine said. “People don’t realize that the people who are being hurt are truly the most vulnerable. They’re cutting the ones that cannot care for themselves, who need help regardless of what we do.” Jake Chalkey takes medicine to control his life-threatening seizures. In 2012, the state made drastic cuts to its Medicaid program, and Jake and other children with developmental disabilities felt the impact. (Photo: Christine Chalkey)

Impacting the Most Vulnerable

Illinois’ process for reviewing Medicaid cases was the result of legislation spearheaded by Illinois state Rep. Patti Bellock, a Republican, in 2012.

Called the SMART—Save Medicaid Access and Resources Together—Act, the law enhanced eligibility verification of income and residency, and made cuts to the state Medicaid program.

“One of our most important missions in Springfield this year was to save Medicaid from the brink of collapse,” Illinois Gov. Pat Quinn, a Democrat, said when the legislation was signed. “… We preserved our health care program that millions of our most vulnerable rely upon.”

The SMART Act saves Illinois approximately $350 million each year, according to the Foundation for Government Accountability, a Florida-based free-market think tank. The legislation was also used as a model for bills passed in other states looking to tackle welfare fraud.

“The devastating truth of waste, fraud, and abuse is it impacts the most vulnerable,” Josh Archambault, a senior fellow at the Foundation for Government Accountability, told The Daily Signal. “States go to balance their budgets right away on those programs. It’s the easiest to cut medication, cut access to providers, reduce reimbursements rates, and as a result, it’s the elderly, the disabled, that see the impact the soonest.”

Since Illinois reformed its Medicaid system, states have adopted what the Foundation for Government Accountability calls the “Stop the Scam” solution, which first taps into databases to verify information like income, residency, identity, employment, and citizenship status for enrollees.

States then consistently monitor welfare rolls to verify that those enrollees are still eligible. Lastly, under the “Stop the Scam” solution, states prosecute those who abuse welfare programs and recover lost benefits.

In addition to Illinois, Massachusetts, Pennsylvania, and Minnesota have already passed legislation aimed at curbing fraud in the welfare system, with total savings topping $1.3 billion annually, the Foundation for Government Accountability estimates.

Four states—Alaska, Wyoming, Kansas, and Missouri—adopted some form of fraud prevention in the welfare system this year. Legislation was pending in another 10 states, according to the Foundation for Government Accountability.

Rachel Sheffield, a policy analyst who focuses on poverty and welfare at The Heritage Foundation, said welfare programs are designed to help families who need it, like the Chalkeys.

“We want resources to be available to those who truly need them, and we need to make sure that policies are in place that ensure taxpayer dollars are going to help those who qualify for these benefits,” she told The Daily Signal.

Archambault said states can combat welfare fraud by focusing on either enrollees or providers, though he contended that it’s best to start with enrollees.

“It’s harder for bad-apple providers to take advantage of the system if only people who are truly eligible are on the program,” he said. “It doesn’t totally eliminate fraud, but it can cut down on it.” Doctors didn’t think Jake Chalkey would live past 2 years old. Today, Jake is 21 years old. When he was in high school, he ran track and sang in the choir. (Photo: Christine Chalkey)

‘Falling Through the Cracks’

When Jake was born, doctors warned Christine and Gary that their son would never walk or talk.

Today, he has exceeded their expectations.

Jake learned to walk at 2 and a half years old and began talking at around 4 years old.

While in high school, he sang in the choir and ran track.

And today, at the age of 21, he works part time at McDonald’s.

Christine was finally able to get her son’s prescription for Keppra covered by Medicaid again, and she has since become an advocate for medically fragile and developmentally disabled children, talking with parents across the country to help them maneuver the system in place for those with developmental disabilities.

After Illinois began auditing its welfare rolls, identifying thousands of people who were dead, moved out of state, or no longer qualified for welfare benefits, she started to speak out about how the millions of dollars spent on benefits for those defrauding the system impacted her son’s life and the lives of other developmentally disabled people.

“Medicaid fraud is a very important issue right now, as government continues to expand Medicaid for able-bodied adults and people here in the country illegally,” she said. “People don’t realize that the people who are being hurt are truly the most vulnerable. They’re being cut. They’re falling through the cracks.”