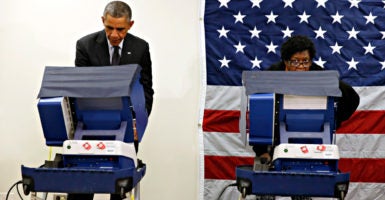 Hacking incidents at voter registration systems in Arizona and Illinois could demonstrate the need for stronger voter identification laws and the flaw with pushing for online voting and registration, experts said.

“We can’t afford this vulnerability in our election systems,” Mark Meckler, president of Citizens for Self-Governance and a former internet technology lawyer, told The Daily Signal in a phone interview.

“We know it can disrupt the integrity of an election,” Meckler said. “There are so many states with no voter ID laws, that hacking into voter registration is a danger.”

The FBI is investigating the hacking of 200,000 voter records in Illinois and a hacking that forced Arizona to take its statewide voter registration system offline.

Illinois officials told news agencies that no information was changed. The Arizona hacking was perpetrated by Russian actors, according to news reports—although investigators have not said whether they believed it to be the work of Moscow or a private criminal enterprise.

“We can’t afford this vulnerability in our election systems,” @MarkMeckler says.

As of June, 31 states and the District of Columbia allowed voter registration online, according to the National Conference of State Legislatures. A total of  34 states had some form of voter ID laws in place. However, some states only request that voters present ID, rather than require it.

“It’s not just foreign hackers, but domestic hackers as well,” Meckler said. “All of us are vulnerable to hacking. No matter how good we get at preventing hacking, the hackers will always get better.”

The Obama administration is taking the threat seriously, but believes Americans should not lose confidence in the system, White House press secretary Josh Earnest said.

“People can have a lot of confidence in the election system in part because it’s not centralized,” Earnest told reporters during Tuesday’s press briefing, adding:

Elections are administered and conducted by state and local authorities, which means you have a patchwork of systems across the country that maintain the records of elections. Sometimes the consequences for that kind of that very system means that it’s hard to make reforms across the board. That also makes it harder to hack the system.

As The Daily Signal previously reported, Homeland Security Secretary Jeh Johnson last week had a conference call with election officials from across the country in which they discussed the possible protection of state election systems as “critical infrastructure.”

“The response from DHS is a pretty good indication of how seriously we take this,” Earnest told reporters. “There is an active discussion on the president’s national security team of designating election administration systems in the United States as critical infrastructure. If so, that would qualify those systems for enhanced protections and resources from the federal government.”

Election experts—including Hans von Spakovsky, a senior legal fellow at The Heritage Foundation—agree it’s highly improbable a national election could be hacked, because of the decentralized system.

However, von Spakovsky contends that a targeted hacking of certain states has the potential to shift an election.

“If it’s an organized effort, and someone hacks into a system and falsely registers bogus voters, you could hire a crew of people to vote multiple times under different names,” von Spakovsky told The Daily Signal. “That’s a problem for states with no voter ID laws. There is no way to prevent that.”

This should be a further lesson to states and localities to avoid online voter registration and especially online voting, which could be particularly vulnerable to hackers, he said.

Von Spakovsky, a former member of the Federal Election Commission, noted that the Republican Party of Utah “stupidly” allowed online voting for its presidential primary in March. That resulted in numerous problems, primarily with voters accessing the system.

Voting machines are not on a network, thus any tampering would have to take place with the individual machine using an available device that allows someone to reset the voting machine, then vote more than once.

Conversely, voter registration information typically is on a network at either the state or local level—making it available for hackers. If citizens can register to vote online, the information would become even more vulnerable, von Spakovsky said.

“Online voter registration would give hackers another point to access information online,” he said.