True Feminism and the Constitution Have Always Been Compatible 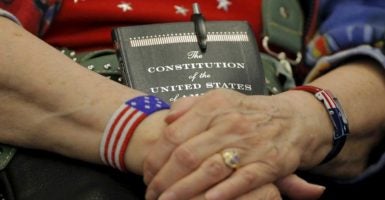 The ideology of the modern feminist movement poses a serious threat to the American constitutional system. (Photo: BrianSnyder/Reuters/Newscom)

Christina Villegas is an assistant professor of political science at California State University, San Bernardino, and a visiting fellow at the Independent Women’s Forum.

Feminists have convinced many Americans that the U.S. Constitution was and remains an impediment to the rights of women. They argue that freedom and equality for women have come to fruition only as a result of modern feminism.

In reality, as I argue in “The Modern Feminist Rejection of Constitutional Government,” the Constitution has always been compatible with women’s equal political rights.

Although modern feminists frequently speak the language of equal opportunity and rights, the movement has strayed from this narrow mission in favor of a far more radical agenda. In the name of “equality,” modern feminism seeks to eliminate gender distinctions and promote absolute parity between the sexes in all areas of society based on a monolithic view of what it means to be an autonomous woman.

As a result, this movement is less interested in protecting individual opportunity and equality than it is in bringing about fundamental legal and social transformation. Such change requires the vast expansion of government, the redefinition of freedom, and the preferential application of the law to women based on their identity as a specially protected class.

This agenda undermines America’s constitutional system, which limits the scope and character of the law with a view to protecting the individual rights of men and women alike.

The modern feminist hostility to limited constitutional government represents a stark shift from the self-understanding and demands of America’s earliest women’s rights advocates (or what is known as the first wave of feminism). These early advocates largely sought to improve opportunities for American women through the expansion of political and legal rights, such as the rights to vote, to own property, and to pursue profitable employment and higher education on an equal basis with men.

Far from being hostile to such rights, the Constitution and the principles of the Declaration of Independence in which it is rooted were always compatible with women’s equal political and legal rights.

Contrary to popular belief, the Constitution of 1787 was never in principle a barrier to female suffrage; Article I, Section 4, Clause 1 simply left the issue up to the states. Additionally, the Constitution’s protections against arbitrary and capricious government action—such as the prohibition against the impairment of contracts, ex post facto laws, bills of attainder, and the suspension of the writ of habeas corpus—by clear implication have always extended to women as well as men.

It is true that because of variations in state law, women did not immediately enjoy the same political and legal rights throughout the nation that men enjoyed, but the authority of the founding documents, and the ideas of natural human equality on which they were based, inspired the movement for the expansion of such rights.

The Rejection of Constitutional Government

Beginning in the 1960s, the second wave of feminism expanded mainstream feminism’s focus from the political and legal, to the social. Its adherents began arguing that the public and private relationships between the sexes are inherently oppressive and that women’s subordinate position within familial and social structures is the root cause of their legal, political, and economic inequality.

At the same time, post-1960s feminists consistently began to redefine freedom and equality. No longer did these ideals mean the right to receive equal protection of the law and make decisions for oneself.

Rather, feminists construed them as qualities that are achieved only when women fully develop their social and intellectual faculties and become autonomous of constraints imposed by gender. This understanding of freedom and equality culminated in the view that, aside from anatomy, there are essentially no innate differences between men and women, and that women can achieve self-actualization only by pursuing work outside the home.

Practically speaking, this perception has led most contemporary feminists to gauge equality in terms of outcome uniformity rather than equal legal opportunity.

Because contemporary feminists generally deny that natural differences between the sexes might influence the free expression of their preferences, they tend to interpret observable differences in outcomes between males and females (for example, in different career fields) as evidence of systemic discrimination and debilitating social conditioning.

Specifically, they argue that the lack of statistical parity between the sexes in all areas of social, economic, and political life results from discrimination, power imbalances within the family and society as a whole, and pervasive gender-based violence. On these grounds, the modern feminist movement supports policies that both implicitly and overtly reject the scope and character of American constitutionalism.

Constitutional government, which limits the reach of government authority with a view to impartially protecting individual rights without regard to sex, is a barrier to the state intervention, regulation of individual liberty, and preferential treatment that feminists believe are necessary for women to escape gendered patterns of socialization and deeply embedded sexism.

Those who are serious about re-establishing constitutional limits on the power of government for the benefit of men and women alike, need to understand how the ideology of the modern feminist movement poses a serious threat to the American constitutional system, which is intended to protect individuals regardless of gender or group membership.