How Republicans in Congress Would Respond to Big-Spending Infrastructure Push 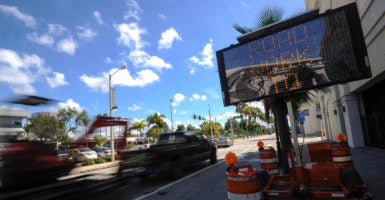 Both presidential candidates have proposed billions of dollars in spending on new and improved roads and bridges. (Photo: Chris Urso/Zuma Press/Newscom)

Fresh after Congress and the White House scored the largest transportation spending package in a decade, both presidential candidates this year are proposing billions in funding to rebuild the nation’s infrastructure.

While both Hillary Clinton and Donald Trump—and the parties they represent—agree the nation’s roads, bridges, airports, rail system, and ports are in need of repair, the new proposals invite familiar questions over how the spending would be paid for, and whether the federal government is the best provider to pay for it.

Those questions, and the lack of a must-pass infrastructure initiative requiring Congress’ attention in 2017, mean that the candidates, like President Barack Obama before them, will be challenged to make good on one of their core policy promises.

While Rep. Daniel Webster, a Florida Republican who serves on the House Transportation and Infrastructure Committee, likes seeing such an emphasis on transportation, he is skeptical that there will be much momentum behind it, whoever the new president is.

“When presidents propose these first 100 day things, they usually get one or two things done,” Webster added in an interview with The Daily Signal. “I’m just not sure infrastructure is the one, because the momentum is not quite the same as it would have been a year ago. It’s almost like, we’ve taken care of it already.”

Familiar Proposals, But a ‘Different Time’

The proposals, though sparse in details, remind observers of Obama’s push for infrastructure upon taking office in 2009, when he made spending on transportation projects a key feature of his economic stimulus package.

Clinton has proposed $275 billion in infrastructure spending over five years, which she says she’d pay for through business tax reform. Some of that funding would go to a national infrastructure bank, a loan and loan guarantee program meant to “get private funds off the sidelines” to support transportation projects across the country.

Trump has promised to double what Clinton will spend on infrastructure.

Both candidates, like Obama, are framing their proposals as a necessary investment in new and improved roads and bridges that would also double as a job creator that stimulates the economy.

Though in 2009 Obama was able to push his $840 billion stimulus plan through Congress—dedicating $105 billion to infrastructure—the next president may face a tougher task. At least one member of the Transportation and Infrastructure Committee, Rep. Mark Sanford, R-S.C., said he welcomes infrastructure improvement initiatives as a way to remain competitive with other countries. But such spending should be done responsibly, he said.

In addition to the usual questions over cost, there may be less urgency for a major infrastructure project because the new president will assume office in an improved economic landscape with a recovering construction industry, undermining the case for infrastructure investment as a fiscal stimulus.

“In 2009, there was this consensus in Washington that something had to be done to get people to work, and transportation investment was a key part of that,” said Robert Puentes, the president and CEO of the Eno Center for Transportation, in an interview with The Daily Signal. “But that’s not the climate now. It’s a different time. We’re not hemorrhaging jobs the same way as back then.”

The presidential candidates would also encounter critics skeptical of a federally managed plan for infrastructure. Some opponents have criticized Obama’s infrastructure stimulus initiative for being overly focused on “shovel-ready” projects that were supposed to put people to work right away, but took too long to break ground.

“We saw from the stimulus that these projects were not shovel ready because of planning and review processes that take time, so they were ill-suited to create jobs in the short term,” said Michael Sargent, a Heritage Foundation research associate focused on transportation policy. “In addition, heavy infrastructure and construction relies on skilled labor and a vast majority of the unemployed don’t have those skills.”

Since initiating the stimulus spending, Obama has struggled to persuade conservatives in Congress on major infrastructure plans. Lawmakers have repeatedly ignored different iterations of Obama’s “Grow America Act.” The latest version of his proposal would have boosted transportation investment by 45 percent.

Before last year, Congress had addressed transportation spending by pursuing short-term extensions of the Highway Trust Fund, which is supposed to pay for most infrastructure projects but has faced massive shortfalls. In 2009, President Barack Obama was able to push his $840 billion stimulus plan through Congress—dedicating $105 billion to infrastructure. (Photo: Andrew Harrer/UPI/Newscom)

The Highway Trust Fund gets its money from the federal gasoline tax. The tax has held steady at 18.4 cents per gallon since 1993, but produces less revenue today because Americans drive less and get better gas mileage.

In December, Congress bucked recent tradition and passed a five-year $305 billion bill to extend the Highway Trust Fund. However, the bipartisan bill does not address the fund’s chronic funding shortfall, instead relying on a bevy of short-term financing provisions to pay for the infrastructure spending.

A House leadership aide told The Daily Signal that Republicans in the lower chamber are satisfied with last year’s infrastructure bill and do not see the issue as a priority in 2017.

“With this multiyear highway bill done, there won’t likely be a rush to move another infrastructure bill for a while,” the aide said.

Even if the Republican-controlled House doesn’t view infrastructure as a top of the agenda issue, observers and lawmakers say the presidential candidate’s proposals have generated an important discussion on the federal government’s role in transportation spending.

In response to federal inaction, Puentes says, states across the country have jump-started their own major infrastructure projects by seeking funding however they can.

States such as Wyoming, Idaho, Iowa, and Maryland have even raised their gasoline taxes.

“What’s happening is states and localities realize there is no cavalry coming from Washington and have been raising their own money,” Puentes said. “When the American public is presented with a clear understanding of where the money’s coming from, where it’s going, and when it’s sunsetting, they are willing to pay for their infrastructure needs.”

Sen. Mike Lee, R-Utah, according to his office, plans to reintroduce next year a bill dubbed the Transportation Empowerment Act that would phase out the federal gas tax to give states spending and taxing authority for their own infrastructure needs.

Conservatives like Lee and Sanford—who said he supports the Transportation Empowerment Act — argue there is less need today for new major federally-led transportation projects, and that states have a better handle on their maintenance and reinvestment issues.

“This is not a partisan statement; the infrastructure on the ground in this country is in dire need of maintenance and upkeep,” Puentes said. “The challenge we have with national infrastructure today is we overemphasize the federal role. The federal government clearly matters for lots of reasons. But there isn’t a New Deal, interstate highway project of the Eisenhower era happening now. We need to figure out what the federal role looks like in the 21st century.”

Rep. Scott Perry, a Pennsylvania Republican on the Transportation and Infrastructure Committee, says he is happy to see the presidential candidates making infrastructure a priority.

“We have imperfect choices and we want to keep funding our infrastructure,” says @RepScottPerry.

Though he argues managing transportation is a core government function, he’s calling for less dramatic reforms to make the federally funded spending and building process more cost efficient, including a proposal that he co-sponsored in Congress to repeal a law that requires federal contractors working in construction to be paid the prevailing local wage.

“I am a representative in Pennsylvania and we have very old infrastructure here,” Perry told The Daily Signal in an interview. “Almost all our highway or bridgework has some federal component, and without that help, those projects would ground to a halt. We have to have the courage to deal not just with the spending of money, but the uncomfortable part of policy to make sure every dime is spent efficiently. I am not thrilled about it, but let’s face it: We have imperfect choices and we want to keep funding our infrastructure.”