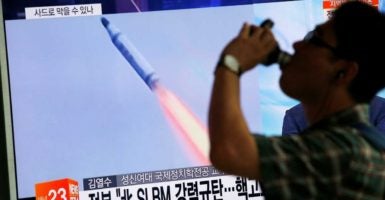 North Korea conducted its most successful test launch of a submarine-launched ballistic missile on Tuesday. The missile traveled 500 kilometers (300 miles), a considerable improvement over the 30-km range of the previous launch, and landed within Japan’s air defense identification zone.

South Korean military officials report that North Korea used an unusual 500-km high trajectory so as not to penetrate the Japanese air defense zone further. If launched on a regular 150-km high trajectory, the submarine-launched missile might have traveled over 1,000 km.

After the unsuccessful missile test earlier this year, the South Korean ministry of defense assessed it would take North Korea three to four years before deploying a submarine ballistic missile force. However, after yesterday’s test, some South Korean military authorities warn deployment potentially could occur within a year.

Despite post-Cheonan efforts, South Korean anti-submarine warfare capabilities remain an area of concern for allied military planners. A strong anti-submarine capability is not only critical for homeland defense but also for protecting sea lines of communication during a crisis on the Korean Peninsula. During a Korean conflict, the South Korean navy could have a critical mission to protect U.S. carrier groups deployed near the peninsula by engaging North Korean submarines.

North Korean leader Kim Jong Un is pushing forward rapidly on both nuclear and missile fronts. In addition to submarine missile launches, this year he has successfully tested a nuclear weapon, an intercontinental ballistic missile, a road-mobile intermediate-range missile as well as medium- and short-range missiles, re-entry vehicle technology, a new solid-fuel rocket engine, and an improved liquid-fuel ICBM engine. During Kim’s four-year reign, Pyongyang has conducted 34 missile tests, more than twice as many as his father Kim Jong Il did in 17 years in office.

In June, North Korea successfully tested a Musudan intermediate-range missile, which led experts to conclude the regime currently has the ability to threaten U.S. bases in Guam, a critical node in allied plans for defending South Korea. Successful No Dong medium-range missile tests were conducted in July and August, accompanied by North Korean statements that they were practice drills for preemptive nuclear attacks on South Korea and U.S. forces based there.

A North Korean media-released photo showed the missile range would encompass all of South Korea, including the port of Busan where U.S. reinforcement forces would land. Adm. Bill Gortney, commander of North American Aerospace Defense Command, stated that North Korea is capable of putting a nuclear warhead on the No Dong medium-range ballistic missile that can reach all of South Korea and Japan.

In March, Kim Jong Un observed another missile launch simulating a nuclear missile attack on South Korean targets. The regime declared those launches were “a sea port of debarkation ballistic missile test [conducted] under the simulated conditions of exploding nuclear warheads from the preset altitude above targets in the ports under the enemy control where foreign aggressor forces are involved.”

In February, North Korea again used a Taepo Dong missile to put a satellite into orbit, the same technology needed to launch an ICBM nuclear warhead. Assessments indicate that the satellite was approximately 450 pounds, twice as heavy a payload as the previous successful satellite launch in Dec. 2012, and that the missile may have a range of 13,000 km, putting the entire continental United States within range.

The accelerated pace of North Korean nuclear and missile tests reflect Kim’s intent to deploy a spectrum of missile systems of complementary ranges to threaten the U.S. and its allies with nuclear weapons. Kim affirmed at the National Party Congress in May—the first held in 36 years—that North Korea will never negotiate away its nuclear weapons.

The U.S. and South Korea should:

North Korea continues its relentless quest to augment and refine its nuclear weapons arsenal and missile delivery capabilities. The international community should maintain a comprehensive effort of augmented sanctions for North Korea’s repeated violations of U.N. resolutions and international law.

But the U.S. and its allies must implement measures to defend themselves against the spectrum of North Korea’s military threats. Ballistic missile defense is an important part of the broader strategy of strong alliances, forward-deployed U.S. military forces in the Pacific, and devoting sufficient resources to the U.S. defense budget.