A College Strikes Back Against Safe Spaces 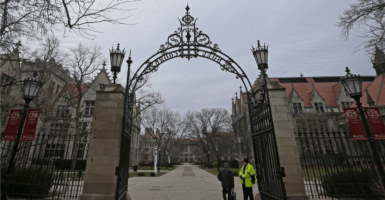 In a letter to incoming freshmen, the University of Chicago's student dean wrote, "We expect members of our community to be engaged in rigorous debate, discussion, and even disagreement.” (Photo: Jim Young/Reuters/Newscom)

If you want to be unquestionably affirmed and unchallenged in all your beliefs and views, don’t go to the University of Chicago.

In a letter published by Intellectual Takeout, John Ellison, dean of students at the Chicago college, warns incoming students that there is no tolerance for the kind of student demands that have trended in recent years:

Mind you, the extreme leftness of academia—there are around five times as many liberal professors as conservative ones, according to a 2014 survey by the University of California Los Angeles—means that even if this trend of ditching safe spaces continues, few liberal students will be seriously affected by hearing challenging ideas, at least in the classroom.

But it’s a start.

Finally! The University of Chicago says NO to safe spaces. Learning means being challenged, uncomfortable: https://t.co/WHEkgAgPcH

And it might mean that more students potentially are exposed to conservative speakers like Ben Shapiro, author of “Bullies: How the Left’s Culture of Fear and Intimidation Silences Americans,” and “Brainwashed: How Universities Indoctrinate America’s Youth.”

Back in February, Shapiro, a popular speaker, was scheduled to speak on “When Diversity Becomes a Problem” at California State University, Los Angeles, having been invited by the conservative Young America’s Foundation campus chapter.

Then-Cal State LA President William Covino tried to postpone Shapiro’s speech, writing in an email that Shapiro should be “part of a group of speakers with differing viewpoints on diversity.” In other words, no matter how many liberals were allowed to give talks without instant rebuttal, Shapiro’s viewpoint was simply too dangerous to go unchallenged.

Ultimately, Shapiro refused to postpone—and delivered his talk, despite protests.

College should be a place where students, regardless of whether they’re liberal, conservative, libertarian, green, no labels, or somewhere in the mushy middle, do encounter other perspectives.

“Led primarily by the school’s Black Student Union and Black Lives Matter chapter, the hundreds of demonstrators, including some professors, poured into the Student Union building Thursday afternoon to block other students from attending the event,” The Daily Signal reported at the time.

The attitude of Cal State LA administrators to the Shapiro speech highlights the current problems at colleges. Heat Street’s Jillian Melchior obtained emails from college administrators discussing Shapiro’s appearance. One, sent in early December by Scott Bowman, dean of the College of Natural and Social Sciences, included this take on Shapiro’s speech:

It could be explosive in the current environment. Nothing he says is hate speech in my view but his critiques of the Left’s obsession with micro-aggressions and various tactics of groups (e.g., Black Lives Matter) would be labeled racist by them, which is his point, by the way.

How have we gotten to the point where college administrators are so terrified of the student body encountering a conservative that months before a speech they’re thinking out coping strategies?

As The Onion put it in a headline last year, “College Encourages Lively Exchange Of Idea,” with the subhead being “Students, Faculty Invited To Freely Express Single Viewpoint.” The Onion ostensibly is a parody site, but actions like Cal State LA’s make it seem like such ideas are no joke.

College should be a place where students, regardless of whether they’re liberal, conservative, libertarian, green, no labels, or somewhere in the mushy middle, do encounter other perspectives. If you are serious about pursuing the intellectual life, you should have enough faith in your ideas to be able to use reason to argue for them.

And you should take seriously other people’s views, both to realize where you are wrong (I realize being wrong may not be the easiest concept for students raised amid the self-esteem movement, but it is a thing that happens), and to expand the vigor of your own arguments in response.

Nothing was preventing those students who think Shapiro is outrageously wrong from—civilly—fighting back, whether via another event, writing op-eds, or a host of other options.

University of Chicago takes a strong stance against safe spaces and trigger warnings.

“Members of our community are encouraged to speak, write, listen, challenge, and learn, without fear of censorship,” wrote University of Chicago’s Ellison in the same letter. While Ellison noted the importance of civility and the inexcusability of harassment, he added, “We expect members of our community to be engaged in rigorous debate, discussion, and even disagreement.”

“At times,” he warned, “this may challenge you and even cause discomfort.”

But debate—especially the kind that causes discomfort, because it makes you think seriously about what you believe and why—is what college should be for. As Oklahoma Wesleyan University President Everett Piper put it in a fiery post in November, “This is not a day care. This is a university.”

And it appears that some students agree. At University of Missouri, where the debate over “safe spaces” erupted last fall, undergraduate enrollment “is down more than 2,100 students, or almost 8 percent, this semester compared to fall 2015,” the St. Louis Post-Dispatch reported earlier this week.

Maybe there’s hope that some millennials do want a war of ideas—and not a silencing of all perspectives that don’t fit the liberal ideology. After all, any robust republic requires plenty of debates—and not just among candidates, but among citizens, wrestling with what the best course forward for their country is.

As Shapiro put it in a speech to students at University of Missouri last year, “You’re in a safe space, thank God. It’s called America.”

Perhaps colleges—and students—are finally waking up and realizing that.