3 Reasons This Bill to Protect Planned Parenthood Is Bad 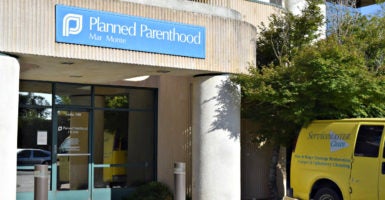 California lawmakers are considering a bill to outlaw secret use of recording devices at Planned Parenthood clinics such as this one in Modesto, California. (Photo: Deke Farrow /Zuma Press/Newscom)

After David Daleiden secretly filmed Planned Parenthood employees discussing the dismemberment and sale of parts of aborted human babies, you may recall, a Texas grand jury indicted him, but not Planned Parenthood, for trafficking human organs.

Daleiden is the head of the pro-life Center for Medical Progress, which last year released the series of hidden-camera videos in which Planned Parenthood officials go over details of obtaining baby body parts for such transactions.

And now Planned Parenthood pushes a bill in the California state Assembly that would amend the state penal code to explicitly address conduct such as Daleiden’s.

The Planned Parenthood bill, AB 1671, appears destined to fail for three reasons: it duplicates existing law, it appears “presumptively unconstitutional” to the state Senate, and it exemplifies the phenomenon of overcriminalization that California Gov. Jerry Brown has opposed in the past.

The Counsel’s Digest also notes the maximum penalty for a first-time violation would include a fine of $2,500 or imprisonment in a county jail for up to a year, or in state prison for up to three years. The penalty would be imposed per violation.

In addition to existing state law, federal law already makes the intentional interception and disclosure of “any wire, oral, or electronic communication” a federal offense, subject to fines, a prison sentence of up to five years, or both.

As former U.S. Attorney General Edwin Meese III once noted in congressional testimony, the nation already has “too many redundant, superfluous, and unnecessary criminal laws,” and they should be consolidated or eliminated.

Even if California and federal law didn’t already proscribe use of recording equipment in this way, this bill as drafted is likely unconstitutional—and the California Senate knows it.

In Burstyn v. Wilson (1952), the United States Supreme Court ruled that film and audio recordings, because they preserve and disseminate the expression of ideas and important information, are “included within the free speech and free press guaranty of the First and 14th amendments.”

In Bartnicki v. Vopper (2001), the Supreme Court held that the First Amendment shields a radio show’s broadcast of an unlawfully intercepted communication that contains “information of public concern” so long as the broadcaster was not involved in the unlawful interception and legally acquired it.

Citing that 2001 decision, a California Senate committee report notes that “a stranger’s illegal conduct does not suffice to remove the First Amendment shield from speech about a matter of public concern.”

The bill, the report said, “appears as if it would apply to a media organization that receives a recording that was obtained in violation of” state law and “would therefore face constitutional challenges.”

Even if Planned Parenthood’s bill survives the California Assembly, Brown, a Democrat, could veto the bill based on his previous actions.

In an October 2015 letter to the Assembly, Brown returned nine bills without his signature and expressed opposition to bills that create new crimes “by finding a novel way to characterize and criminalize conduct that is already proscribed.”

“This multiplication and particularization of criminal behavior,” the governor added, “creates increasing complexity without commensurate benefit.”

Would the bill increase complexity? The California Senate has indicated it would by diminishing the public interest, identified in the 2001 Supreme Court case, in “the full and free dissemination of information concerning public issues.”

Would AB 1671 provide commensurate benefit? In one of Daleiden’s hidden-camera video recordings, as reported by The Federalist, a top medical officer for Planned Parenthood explained a reason to discuss a good price for aborted baby remains in the first place: “I want a Lamborghini,” she quipped.

Neither the First Amendment nor the criminal law should be abused to hide such ambitions from the public.