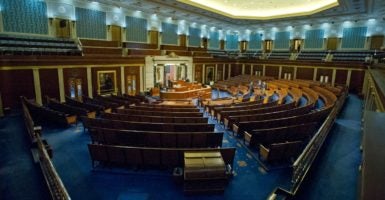 The next fight looming in Washington is all about scheduling, and conservatives already are struggling for control of the congressional calendar. The aim of their tussle over timing is to keep any major legislation from taking flight during the lame-duck session of Congress.

A natural part of every legislative progression, the lame duck occurs every two years—after the general election in November but before the next congressional session begins in January. A last hurrah of sorts, the session lasting about four weeks gives outgoing politicians a final series of opportunities to legislate.

“It’s a unique time period when some members have either retired or lost their re-election bid,” said Matthew Mitchell, senior research fellow at the Mercatus Center, a free-market think tank at George Mason University.

Lawmakers are more likely to balk at their leadership and make deals with the other side, Mercatus researchers report after analyzing more than 50,000 roll call votes during lame-duck sessions stretching nearly 80 years, from 1936 to 2014.

“They’re no longer answerable to their constituents, leadership, or other politicians,” Mitchell said.

Unencumbered by those obligations, he said, lawmakers are free to “just vote their conscience and do what they want.”

That lack of accountability frightens conservatives and is one of the reasons why members of the House Freedom Caucus have been pushing House Speaker Paul Ryan, R-Wis., to ground the lame duck altogether.

The session is the last opportunity for President Barack Obama and Senate Minority Leader Harry Reid, R-Nev., to solidify their legislative legacies before the two relinquish their posts. To conservatives, this last lame duck represents a potential Pandora’s box of liberal policies.

“So many bad things can happen during a lame-duck Congress,” David Williams, president of the Taxpayers Protection Alliance, told The Daily Signal. “There’s very little oversight and accountability. The whole thing just doesn’t bode well for the taxpayer.”

Recent experience has taught conservatives to fear the lame duck. During Obama’s presidency, Congress has used the session to increase taxes, bail out the automotive industry, and enter a nuclear treaty with Russia.

Before turning the House over to Republicans after the first midterm election of the Obama presidency, Democrats scored high-profile victories during the 2010 lame-duck session.

Democrats rallied to the side of outgoing House Speaker Nancy Pelosi, R-Calif., to repeal the long-standing “don’t ask, don’t tell” policy governing homosexuality in the military by a 250-175 vote.

Then just three days before Christmas, the Senate ratified the New Strategic Arms Reduction Treaty by a vote of 71-26, despite conservative concerns that the agreement increased the risk of serious nuclear conflict.

Democrats would have never been able to achieve such major legislative victories, Republicans speculated, without using the lame duck for leverage.

“Harry Reid has eaten our lunch,” Sen. Lindsey Graham, R-N.C., said on Fox News Radio. “This has been a capitulation in two weeks, of dramatic proportions of policies, that wouldn’t have passed in the new Congress.”

A Democrat effort to grant permanent residency to illegal immigrants who came to the U.S. as children, the DREAM Act, failed to gain the 60 votes necessary to advance. The vote was 55-41.

After defeating Mitt Romney to win re-election in 2012, Obama handed Republicans a second loss during the lame-duck session.

Democrats strong-armed Republicans into approving legislation that would extend tax cuts for the middle class while raising tax rates on the rich. Ryan described the legislation, muscled through at the last minute, as “the largest tax increase in history.”

The measure passed out of the Republican-controlled House, with Ryan’s vote, 257-167. Ryan, not yet House speaker but the party’s just-defeated candidate for vice president, said he voted for it to avoid a worse deal.

The Democrat-controlled Senate signed off on the $620 billion tax increase at 2 a.m. in a rare New Year’s Day vote, 89-8.

House Republicans complained that Senate Democrats had forced the deal on them during the 11th hour.

“We should not take a package put together by a bunch of sleep-deprived octogenarians on New Year’s Eve,” retiring Rep. Steven C. LaTourette, R-Ohio, told The Washington Post at the time.

Obama signed the legislation into law from Hawaii, where he was vacationing with his family at the time.

Two weeks before Christmas 2008, with Obama the president-elect, the House approved a $14 billion taxpayer bailout for the American automobile industry, which was teetering on the edge of bankruptcy.

The bill passed out of the House along party lines, 237-170. Only 32 House Republicans, including Ryan, supported it.

Though Democrats controlled the Senate at the time, an entrenched conservative cadre kept the relief package from reaching the president’s desk.

“This is an installment on a huge bailout that will come later,” Sen. Richard C. Shelby, R-Ala., said, describing the last-minute proposal as “a travesty.”

The Senate abandoned the effort, but only after lawmakers failed by eight votes to reach the 60 votes needed to bring the bailout up for consideration.

President George W. Bush, in his remaining weeks in office, redirected funds from the Troubled Asset Relief Program to the stalled automakers.

Today, almost three months in advance of the 2016 lame duck, conservatives are signaling that they have little confidence in GOP leadership. They’re pushing for a continuing resolution that would lock in spending until the next Congress, effectively grounding the lame duck.

Conservative aides fear a multitude of possibilities ranging from impromptu regulation to an emergency supplemental bill to address the Zika virus.

The Obama administration has telegraphed that it intends to use its last lame duck to pass the president’s marquee trade legislation, the Trans-Pacific Partnership.

This report has been modified to correct the House budget vote.