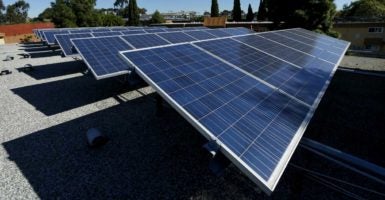 Children are filtering back to school in the nation’s capital, but one school is getting students off on the wrong foot by promoting careers propped up on the backs of the taxpayer: renewable energy.

H.D. Woodson High School has three career and technical education program tracks. Two of them line up with traditional educational training classes in computer science and business administration, but the third, renewable energy, is unique.

The school opened a “Green Academy” where “Students will begin their path to the green workforce by completing introductory classes aimed at introducing them to Solar, Wind, and Fuel cell technologies. Once completed they will be ready to choose from several nationally recognized certification courses that include Wind, Solar, Energy Auditing and Smart Grid technology.”

The program isn’t preparing students to take advantage of the wave of the future but setting them up for failure. Renewable energy’s (particularly wind and solar) business model is built on a house of subsidized cards. The industry stands to benefit from direct grants, targeted tax credits, taxpayer-backed loans, and generous handouts at the state level such as renewable electricity standards that mandate a certain percentage of a state’s power supply be generated from renewable sources.

Take the subsidies away and you’re left with intermittent, expensive energy technologies that in most instances are prohibitively costly to compete with conventional sources of energy like coal, oil, or natural gas.

If the subsidies cease to exist, training young Americans to enter the renewable energy workforce will be as useful as teaching them to build and sell typewriters and VCRs. Vocational training and on-the-job training have tremendous value.

However, when the industry is resting on the crutch of the government, businesses can fall flat on their face and employment opportunities disappear once the crutch is removed.

For instance, the wind production tax credit, a major subsidy for wind producers, expired in 2000, 2002, and 2004, and annual wind installation decreased by 93 percent, 73 percent, and 77 percent—consequently resulting in massive layoffs.

Wind energy advocates call this a boom-and-bust cycle, but it is more accurately a case of the wind tax credits artificially propping up a large portion of wind production. Relying on subsidies is an unsustainable business model that will result in preparing young Americans for work that doesn’t exist.

The grown-up version of the Green Academy hasn’t worked so well, either. The federal government has embarked on many green jobs training programs to install more energy-efficient windows, among other politically labeled “green” occupations.

A September 2011 Department of Labor Office of Inspector General report found that “grantees have expressed concerns that jobs have not materialized and that job placements have been fewer than expected for this point in the grant program.”

A follow-up report released in October 2012 found that the program fell well short of its retention goal of 71,017 workers: Only 11,613 participants (16 percent) remained employed longer than six months, and much of the training was delivered to already-employed workers and was not necessary for them to perform their jobs.

Lags will exist in particular workforces, but that does not mean a government program can (or should) fill the gap. The private sector expands and trains workers appropriately (and contracts as necessary) to meet demand or capture more opportunities, and it will make those investments with its own resources. Educational programs can apply to renewable fields if alternative energy sources are the future. Rather than pigeonhole students in one career, the value of math and science education can be used across many career fields, including renewables.

Importantly, policymakers can make great strides at the K-12 level by empowering parents and children to develop an education program that best suits their needs.

Instead of a funding system that remunerates regular public schools based on enrollment, funding for K12 education in D.C. could go directly into a parent-controlled education savings account. Parents would then be able to voluntarily contract with the schools and service providers of their choice, including regular public schools, charter schools, and private schools.

Washington already has backward thinking when it comes to energy policy. It shouldn’t trickle down to the schools too.