What’s Wrong With the Government’s Mandating of Energy Efficiency 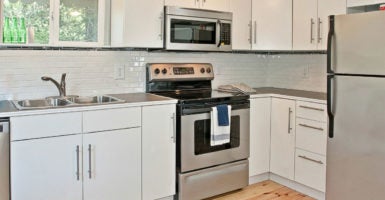 The federal government is busying itself regulating how much energy the appliances Americans buy are allowed to use. (Photo: Spaces Images Blend Images /Newscom)

The Obama administration’s Department of Energy has churned out a list of energy efficiency regulations before the next administration. Just since June, the DOE has set or initiated standards for dehumidifiers, ceiling fans, battery chargers, and wine coolers.

At issue isn’t health or safety, or even unfair business practices. Through the DOE, the federal government is busying itself regulating how much energy the appliances Americans buy are allowed to use. Our recent backgrounder, “The Energy Efficiency Free Market Act: A Step Toward Real Energy Efficiency,” goes into more detail.

Take a look around your kitchen. Many of the appliances are also regulated by the federal government, from the oven and refrigerator, down to the standby light on the microwave. Step outside to other rooms and even outdoors. TVs, showers, air conditioners and heaters, washers and dryers, backyard swimming pools, toilets—these are just some of the other things regulated by the federal government.

Energy efficiency isn’t a bad thing. In fact, it’s an important factor in many Americans’ purchasing decisions. But there are a number of reasons why the federal government should not be mandating it:

But if the government didn’t set mandates, wouldn’t companies stop producing energy-efficient products? Refrigerators, which the DOE points to as a success story, are just one example of why there’s no reason to worry:

The Standards Program has driven remarkable gains in the energy efficiency of household appliances and equipment, resulting in large energy bill savings. For example, today, the typical new refrigerator uses one-quarter the energy than in 1973—despite offering 20 percent more storage capacity and being available at half the retail cost.

One problem: The first federal efficiency standards for refrigerators did not go into effect until 1990. Refrigerator manufacturers were improving energy use and design for nearly two decades before the government got involved.

As customers, Americans put importance on energy efficiency without the government nudging. And the free market is only too willing to supply.

Over the years, the DOE—empowered by Congress through the Energy Policy Conservation Act of 1975—has quietly expanded the list of products it regulates for energy efficiency. Congress should eliminate all mandatory efficiency regulations and leave these decisions to state governments and American consumers.