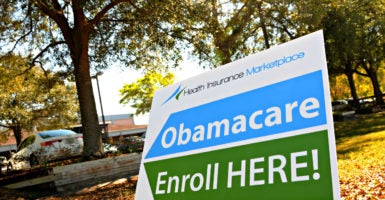 Projections show residents in 664 of the more than 3,000 counties in the United States will have only one company from which to buy individual insurance next year. (Photo: Paul Hennessy /Polaris/Newscom)

Five states will be down to just one health insurer on the Obamacare marketplace next year, and consumers in 664 counties are projected to face that same situation under a law sold as providing “choice and competition.”

The five states that will have no choice are Alabama, Alaska, Oklahoma, South Carolina, and Wyoming.

Two more states, North Carolina and Kansas, are close to having only one Obamacare insurer, health policy experts note.

Moda Health announced it would leave Alaska, while WINhealth in Wyoming closed its doors in 2015.

Projections show residents in 664 of the more than 3,000 counties in the United States will have only one company from which to buy individual insurance next year. That’s up from 225 “monopoly”  counties this year.

Residents of 1,121 counties—more than a third of all counties—will have two or fewer companies to choose from, according to the Kaiser Family Foundation, a health care research group. The situation actually looks worse, though.

“Unless there are major changes, the marketplace is not going to grow,” @Heritage’s Ed Haislmaier says.

Kaiser has not updated the estimate, and a spokesman said he wasn’t sure whether the estimate anticipated these companies exiting.

In April, UnitedHealthcare announced it would leave most of the 34 states where it previously operated.

A Drain on Rural America

Of the 664 counties expected to have only one insurer under Obamacare, 70 percent are considered rural. The mass exit from the program is hitting rural America the hardest, in particular parts of Kentucky, Tennessee, Mississippi, Arizona, and Oklahoma, The Wall Street Journal reported.

Of states with only one insurance company participating in Obamacare, South Carolina took the biggest hit. In 2013, it had nine companies selling individual insurance policies.

Oklahoma residents could choose from eight companies in 2013 before the health care law established the Obamacare marketplace and exchanges.

Wyoming consumers had five choices before the opening of the Obamacare marketplace, while Alabama and Alaska consumers had four to choose from, according to a Heritage Foundation analysis.

Speaking before a joint session of Congress in September 2009, President Barack Obama made a pitch for Obamacare by declaring:  “My guiding principle is, and always has been, that consumers do better when there is choice and competition.”

In June 2013, the year that saw the start of Obamacare’s federal marketplace and state exchanges for individual policies, the president said: “You now have these marketplaces where they’re going to offer you a better deal because of choice and competition.”

Both the law and its implementation created problems, Heritage’s Haislmaier said.

“The underlying reason is basically a dysfunctional market and a policy made worse through implementation,” Haislmaier told The Daily Signal in a phone interview. “Unless there are major changes, the marketplace is not going to grow, it’s not going to get enough of the young and healthy people they want [to make up for sick and low-income enrollees].”

The United States had 395 competing health insurers in the individual market before Obamacare’s 2013 advent. That number dropped to 287 earlier this year, according to the Heritage analysis published in April.

Haislmaier projects that 40 fewer companies will operate in the marketplace and exchanges in 2017.

Assessing counties can be more accurate than looking at the number of insurers in states, according to a report released in March by Sen. Ben Sasse, R-Neb.

The report found that consumers in 36 percent of the nation’s 3,007 counties had two or fewer insurers from which to pick in 2016.

Another 27 percent of counties had three insurers, while just 8 percent had more than five insurers. Hit hardest by a lack of competition in individual counties: Nevada, Utah, Wisconsin, West Virginia, and Texas.

The Sasse report notes that state totals can be misleading. For example, Wisconsin had 16 insurers selling coverage on the Obamacare marketplace, but just one of 72 counties had nine insurers—and 45 counties had five or fewer.

While the California health exchange had a total of 12 companies, the average for the state’s counties was four, according to the Sasse report, which was compiled before the United, Humana, and Aetna announcements.

However, Kevin Counihan, marketplace CEO at the U.S. Centers for Medicare and Medicaid Services, which oversees Obamacare, cites data such as consumer satisfaction, an improving risk pool, and coverage for more Americans as evidence of a strong system.

In a statement provided to The Daily Signal, Counihan said of implementation of the Affordable Care Act:

It’s no surprise that companies are adapting at different rates to a market where they compete for business on cost and quality rather than by denying coverage to people with pre-existing conditions. But the ACA marketplace is serving more than 11 million people and has helped America reach the lowest uninsured rate on record.

The Obamacare official’s take is “largely spin and part of it is ideological,” Haislmaier said, adding:

To say 11 million is an exaggeration because we know there has been a 20-25 percent drop-off in [Obamacare] enrollment from previous years. They are counting people who started to enroll—people who put something in the shopping cart but haven’t yet checked out and paid.

States That Got More Competition

Eight states had an increase in insurance companies from 2013 to 2016, while others kept the same number, according to The Heritage Foundation analysis.

Rhode Island and Montana each saw an increase from two insurers to three. Washington state went from seven to 10, and New Hampshire from two to five.

Kentucky had one more insurer on the individual market than before Obamacare—going from six to seven.

Haislmaier said the common thread among these states with an increase was a heavily regulated health market before Obamacare was enacted.

Other states remained the same as in 2013, with California at 12 insurers, Idaho with five, Nebraska with four, and Hawaii with two.

On Aug. 11, the Centers for Medicare and Medicaid Services provided steps it said it took to manage the uncertainties posed by high-risk enrollees.

To demonstrate that insurance companies are profiting from the federal marketplace and state exchanges, CMS noted that in 2014, the Affordable Care Act “almost doubled insurers’ premium revenue in the individual market, which increased by 97 percent,” according to a report from the Commonwealth Fund.