Government by Special Interests Is the Problem, Not the Solution 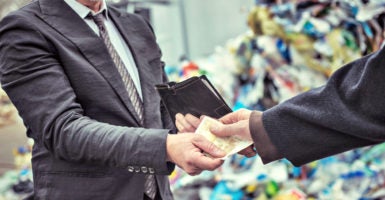 Calls for empowering special interests undermine the Constitution and threaten the individual liberty of all Americans. (Photo: iStock Photos)

“Bring back the special interests!”

A version of this plea is heard more and more these days from those worried about the current state of our politics. It is the implicit theme of a recent Atlantic cover story, provocatively titled “How American Politics Went Insane.”

The author, Brookings Institution scholar Jonathan Rauch, asserts that the only way to fix the broken political system is by bringing back the special interests that once called the shots in our nation’s capital. Until then, Rauch argues, we will be stuck with a dysfunctional government that cannot act.

Yet this is a false choice. Government by and for the special interests is not the opposite of gridlock. Our political system was designed to ensure that the most important things get done only when they are supported more broadly by the American people.

Moreover, calls for empowering the special interests undermine the Constitution and threaten the individual liberty of all Americans. They would allow the government to circumvent the institutional impediments to action designed by the framers of the Constitution and do things in the absence of popular support.

Of course, proponents of bringing back the special interests typically refer instead to the “weakening” of our “institutions” and their “power brokers” —or the establishment—to fashion compromise. For them, “political disintegration” means that the establishment no longer commands the power with which it once presided over our politics.

The underlying argument here is that it’s been a bad thing for the establishment to lose control of the political process. Without the establishment, the special interests no longer are represented inside government to the extent they once were.

Instead, this argument goes, they have to contend with popular opinion, which is frequently divided on controversial issues. Because of this unfortunate development, government is no longer able to get things done. Chaos is the result.

It follows, then, that the way out of our current predicament is to empower the establishment to represent the special interests inside government once again, thereby restoring order out of chaos.

Put differently, we should bring back party bosses and the partisan machines they control, smoke-filled rooms, powerful congressional leaders, and budget earmarks. Doing so will impose discipline among the independent-minded rank-and-file members of Congress, or “hard-liners” on both sides of the aisle who are often blamed for the current dysfunction. In short, according to this reasoning, bringing back special interests will make the system work again.

Implicit here is the assumption that government action favored by the establishment is good. By extension, things that impede that action, such as senators and representatives in opposition, are bad. (Never mind the fact that they represent their constituents in the process.)

It follows, then, that steps should be taken to empower the government, as directed by the establishment, to act. The fact that large swaths of the American people on the left and the right may oppose such action is of no importance.

But empowering the government to act in this way is directly at odds with the Constitution, which was designed to frustrate all but the most important actions.

The framers of the Constitution grappled with the problem presented by special interests for the new government, or what James Madison referred to in Federalist 10 as the “mischiefs of faction.”

For the framers, factions were analogous with how we think about special interests today. That is, both were “united and actuated by some common impulse of passion, or of interest, adverse to the rights of other citizens, or to the permanent and aggregate interests of the community.”

Madison argued that special interests were a threat to the very success of the American experiment in self-rule, observing that the “instability, injustice, and confusion” to which special interests historically led are the “mortal diseases under which popular governments have everywhere perished.”

Yet such groups are a fact of life, both then and now. They cannot be separated from government.

The framers’ solution more than 225 years ago was to prevent a majority faction, or a collection of smaller groups of special interests, from forming. This was possible, in large part, because the diverse population of the United States made it less likely that a group of disparate special interests would be able to successfully join forces to form a majority faction and control the government.

‘Justice and the General Good’

In Federalist 51, Madison accurately predicted that individual liberty would be better protected under the new constitutional architecture because it limited the influence of narrow special interests.  He wrote:

In the extended Republic of the United States, and among the great variety of interests, parties, and sects which it embraces, a coalition of a majority of the whole society could seldom take place on any other principles than those of justice and the general good.

Inaction, or gridlock, would result when the American people did not agree on what would promote justice and the general good. But gridlock in this sense was not a problem for the framers. Instead, they saw it as a necessary price for protecting individual liberty under the new federal government.