How the Government Is Mandating Food Waste 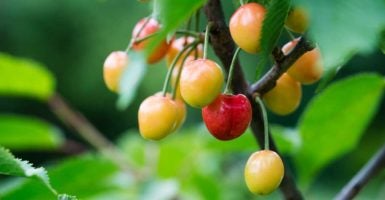 American farmers are wasting fruit because of a government order that limits the supply of tart cherries. (Photo: Mandy Reschke/Westend61 GmbH/Newscom)

The federal government forces certain fruit and vegetable (and nut) growers to limit the sale of their goods. Just ask tart cherry growers.

In July, a Michigan tart cherry farmer posted a photo on Facebook showing piles of his wasted cherries that will rot on the ground. He says 14 percent of his cherries are going to be wasted due to the Department of Agriculture’s tart cherry marketing order that limits the supply of tart cherries.

Fruit and vegetable marketing orders are a relic of the New Deal, authorized by the Agricultural Marketing Agreement Act of 1937.  These orders are supposed to stabilize prices for commodities.

Each individual order is initiated by industry and must be approved by a two-thirds vote of growers. Each order is enforced by the USDA and is binding upon the entire industry in the covered geographic area, regardless of whether an individual agricultural producer has supported it. Among other things, these orders authorize research and promotion of commodities, establish minimum quality standards, and sometimes limit supply through volume controls.

In practical terms, an industry uses the power and force of the government to compel everyone affected by the specific order to abide by the order’s legally enforceable regulations. In short, by using government to impose an order, industry members opt for government compulsion rather than private cooperation.

Some order provisions, such as attempts to manipulate the market through volume controls, would likely violate federal antitrust law absent government intervention. In those cases, the federal government has effectively created fruit and vegetable cartels and is blessing a form of price fixing.

Tart cherries are not the only recent example of the egregious nature of marketing orders, and, specifically, volume controls.

In 2015, the Supreme Court’s “raisin case” (Horne v. Department of Agriculture) involved marketing orders. In an 8-1 opinion, the court held that supply restrictions under the raisin marketing order, which forced raisin growers to turn over some of their raisins to the federal government, was a taking of private property requiring just compensation.

Even Justice Sonia Sotomayor, who held that the government had not actually taken the raisins, explained in her dissent: “The Order may well be an outdated, and by some lights downright silly, regulation. It is also no doubt intrusive.”

Congress should repeal all fruit and vegetable marketing orders. At a minimum, it should eliminate these absurd volume controls that deprive individual growers of the freedom to sell their goods as they deem fit.

Tart cherry growers shouldn’t have to limit the sale of their cherries. They shouldn’t be put in a position, due to government meddling, where they conclude their best option is simply to waste perfectly good cherries.

These outdated volume controls need to be dumped, unlike tart cherries. Congress has a chance in the upcoming appropriations process to withhold funds from the USDA for the implementation and enforcement of any volume controls. Ultimately, Congress needs to amend the Agricultural Marketing Agreement Act of 1937.

The time is ripe for congressional action.