Another Travel Fiasco Courtesy of the TSA 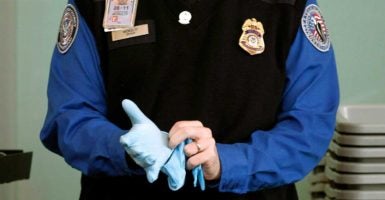 A House committee study found that $1 billion could be saved over five years if America’s 35 largest airports used private screeners instead of the TSA. (Photo: Jason Reed/Reuters/Newscom)

I have long been a believer that, in most cases, a private company will do a more effective and efficient job than any government agency charged with the same task. My recent travel experience solidified that belief.

It all started out with a half-empty water bottle at Ronald Reagan National Airport just outside the District of Columbia.

I had checked in the night before, checked my bag at the curbside when I arrived, and now had a full hour to go through security. With Congress gone since late July and much of the District emptied out until Labor Day, I didn’t expect long security lines. I was right. I breezed through in two minutes, until…

Like many airline passengers, I had forgotten to take my plastic bottle of water out of my bag before placing it on the moving belt for security screening. So, naturally, the screener pulled my bag and after I waltzed through the body image scanner with no hiccups, I joined the Transportation Security Administration agent assigned to check my bag.

As I suspected, the water bottle was the culprit but he still had to do a mandatory chemical test of my bag. That’s when they take those little black sticks with swatches on the end and rub them over your belongings, or sometimes the palms of your hands, and then run them through a machine. Fairly routine. Except this time my swatch sent off an alarm. No noise, just a flashing “Alarm” text on the machine’s computer screen. So, they tried again. Same response.

That meant I qualified for a full-body pat-down. I know people who have gone ballistic when asked to have that done, but I go along as I’ve got nothing to hide and I just want to get my purse and get to my gate. Nope. After the pat-down, they do a chemical test on me and my swatches send off the alarm too.

We’re now about 15 minutes and five (yes, five) TSA agents into this little drama. The screener, the guy who first checked my bag, the female TSA agent who was assigned to do the pat-down, the TSA agent who had checked my ID and boarding pass were all there, along with another agent who, as best as I could tell, was simply assigned to stand next to me and make small talk and make sure I didn’t go anywhere.

The agents do another chemical test and decide they need to do another full-body pat-down. They want to do this one in private, assign a new female TSA agent to do it, but tell the original one to also attend as a witness. When I come back out, there is now a manager involved and they are calling the head of something—I could never get the official title—who was supposedly the only person at Reagan airport who could come check my chemical tests and figure out what was going on.

Twenty minutes later, and with no sense of urgency, he arrives. So here we, meaning me and now up to eight TSA agents, go again. Now they are taking out my items one by one to run through the screener—my two lipsticks, eyeshadow, computer power cord, jewelry bag, wallet, sunglasses, etc. Not sure why the original crew didn’t do that, but at this point it was clear most of these folks, bless their hearts, probably had this job because it is one of the few that requires no problem-solving skills or ability to act with speed, and where, heaven knows, customer satisfaction is found nowhere on a personnel review form.

Four gray TSA bins, each holding a few of my items, are then whisked off by no less than three TSA agents (that’s right, it took three people to carry four bins holding heavy-duty items like makeup and hand sanitizer) to a back room. I’m told nothing. For another 15 minutes I sit, not asking too many questions because I still have hope against hope that I might make my flight and don’t want to do anything to take one of these whiz kids off their game.

Now, 55 minutes into this whole process, the back room door opens, out come all my bins and items and I’m told I’m free to go. Dumping everything into my bag and grabbing my shoes, which I had not been allowed to put on, I race barefoot to the gate.

Alas, it was not meant to be. I missed my flight.

The only positive, or so I thought, was that now I’d have time to go back and check in with the TSA folks to find out exactly what it was that caused the problem. I hadn’t taken the time to do so when they finally gave me the all-clear because I just wanted to get to the gate. But now, in an attempt to not relive this experience in the future, I was determined to find out what shampoo I had used or lotion I was wearing that sent their chemical sensors into a frenzy.

No such luck. They can’t tell you that. When I got back to the TSA area, I found the agent who had been the original screener and asked him if he had been told what had caused the problem. “I can’t tell you,” was his response. “It’s a chemical but I’m not allowed to tell you what kind.”

I prodded further, “You mean you know what it is, you must have concluded it wasn’t dangerous because you all finally let me go, but you can’t tell me so that I make sure not to wear it again or have it in my bag again?”

So how many TSA agents did it take to make me miss my flight yet give no explanation as to why or what to do different next time around?

My story apparently isn’t unique. A man putting on his shoes after coming through security and sitting on the bench next to me as I was working on this article said the exact same thing happened to his wife last summer, except that in her case it turned out she wasn’t sporting some odd lotion or perfume, the machine had simply malfunctioned multiple times. Too bad she missed her international flight while they figured that out.

A study by the House Transportation Committee found that $1 billion could be saved over five years if America’s 35 largest airports used private screeners. My Heritage Foundation colleague David Inserra has pointed out that “with smaller overhead costs and lower levels of attrition, the screening program is likely a financial boon for most airports.” He also says those airports report improved customer service.

So why do roughly only 20 U.S. airports make use of the private screening option? Because the Obama administration, in one of its “go around the laws we don’t like” moves, suspended the program in 2011 (Congress rightly later reinstated it), because it can take up to four years for an airport to get approval due to government bureaucracy, and because the TSA and its unionized workforce has no interest in competing with the private sector.

The reality is that air travel need not be the fiasco it has become. Congress can rein in the TSA by streamlining the process to hire private screeners and forbidding the unionization of its employees.

Until then, maybe you shouldn’t shower before your flights.