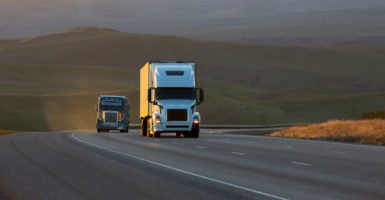 The government thinks it knows better and has better business and investment acumen than those actually in the trucking industry. (Photo: Jetta Productions Blend Images/Newscom)

In a continued effort to address alleged man-made global warming, the Obama administration has finalized energy efficiency standards for medium and heavy-duty trucks. While the administration is pledging to reduce fuel use and cut greenhouse gas emissions, its stringent energy mandate will do nothing to affect climate change.

What it will do, however, is take decisions away from the American individuals and businesses and consolidate more power in Washington. The regulation requires a wide variety of vehicles—from school buses and passenger vans, to garbage and delivery trucks and long-haul tractor-trailers—to improve fuel efficiency.

This is the second round of fuel efficiency standards coming from the Obama administration, with this one covering model years 2021-2027.

According to the Environmental Protection Agency’s press release, owners of the vehicles need not worry about the higher upfront prices paid to implement new technologies because drivers will save money on fuel costs—an estimated total of nearly $170 billion, according to the EPA. The press release states that “The buyer of a new long-haul truck in 2027 would recoup the investment in fuel-efficient technology in less than two years through fuel savings.”

It is so considerate that the federal government would devote taxpayer-funded resources to create and enforce a regulation that will help trucking business’ bottom line.

It’s a bunch of hogwash.

Here’s an industry that has nearly 3 million heavy-duty trucks that carry approximately 70 percent of America’s freight. The trucks consume more than 52 billion gallons in fuel, spending more than $143 billion in diesel costs. And the industry operates on paper-thin margins and plans driving routes down to the tenth of a mile to save on fuel costs.

This Washington-knows-best mentality is fraught with problems.

But forget all of that. The government thinks it knows better and has better business and investment acumen than those actually in the trucking industry.

This Washington-knows-best mentality is fraught with problems. First and foremost, these regulations take away investment choice and empower Washington to override preferences of the private sector.

Maybe the owner of a school bus operation wanted to build a new parking lot or expand his fleet. But now he has to pay higher prices. As a result, he may decide to run his older buses into the ground rather than pay for new ones that will now have a higher upfront price as a result of the fuel efficiency mandate.

Furthermore, the regulatory impact analysis supporting the rule and justifying the economic and environmental benefits has many problems. The estimated fuel cost savings estimate fuel price projections out past 2045. Most experts have a hard enough time projecting what prices will be three months from now, let alone 30 years from now. The government may also be underestimating the maintenance costs of using new but unfamiliar technologies.

The regulation will have almost zero impact on global temperatures.

Whatever the most accurate estimate of the social cost of carbon is, the bottom line is the same: The regulation will have almost zero impact on global temperatures.

In fact, no matter how much the administration chooses to regulate our economy to reduce greenhouse gas emissions (cars, new power plants, existing power plants, fracking, airplanes, trucks), it may moderate the Earth’s temperature by a small fraction of a degree, if at all.

The regulatory impact analysis may also underestimate the fuel savings and overestimate the costs. The point is, we don’t know, but that is for the market to determine. Supply, demand, competition, and the powerful incentive for families and businesses to get the biggest bang for their buck all work together to drive down prices, get better performance, and provide greater efficiency.

Importantly, government intervention into energy decisions stifles innovation that would yield better economic and environmental results. As Rep. Michael Burgess, R-Texas, remarked in his press release calling for the repeal of all federal energy conservation standards:

When the government sets the efficiency standard for a product, that often becomes the ceiling. I have long been a firm believer in energy efficiency; however, when the market drives the standard, there’s no limit to how fast and how aggressive manufacturers will be when consumers demand more efficient and better made products.

The paternalistic role the federal government takes when implementing energy mandates disregards individual preferences and business decisions that are better left for the private sector. It is one of President Barack Obama’s final acts to address climate change before he leaves office. We don’t need a curtain call. We need less government intervention.