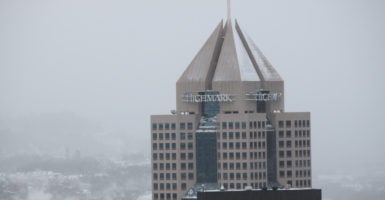 Customers of Highmark Blue Cross Blue Shield of Delaware could see their rates increase an average of 32.5 percent next year. Many insurance companies nationwide have requested rate increases for 2017. (Photo: RJ Schmidt/Flickr/CC BY-ND 2.0)

Ask 68-year-old Gavin Braithwaite how he feels about the amount he and his wife, Louellen, are expecting to pay for health insurance next year, and he’ll tell you he’s horrified, but not exactly surprised.

Since 1992, Gavin said, he’s watched the cost of their coverage increase over the years.

So Gavin wasn’t surprised to learn that his wife’s insurer, Highmark Blue Cross Blue Shield, asked for a rate increase of 32.5 percent for next year, which would bring the cost of her premiums to more than $650 per month.

But, he said, he is horrified.

Gavin and Louellen have lived in Delaware for 24 years, first in Wilmington and now in Lewes, where they started a retail gift shop after leaving the corporate and academic worlds.

In 2013, Gavin turned 65 and enrolled in Medicare. But his wife is 12 years his junior, and she won’t become eligible for Medicare until 2025. So, Louellen has an individual market plan available on the exchange through Highmark Blue Cross Blue Shield.

Louellen doesn’t qualify for a subsidy.

A spokesman for Highmark could not confirm or deny that she is a customer.

“Yikes,” Gavin told The Daily Signal in a phone interview. “When it went up last year, we were saying to ourselves we didn’t know what we’re going to do next year. And would you believe it? Another 32 percent.”

The Braithwaites are not alone.

Across the country, insurers have slowly been submitting their proposed rates for 2017 to state insurance commissioners, and most are seeking double-digit increases.

Large insurers including Aetna and Humana joined UnitedHealthcare in deciding to leave Obamacare’s exchanges altogether. And 16 of the 23 co-ops started under the Affordable Care Act have failed, leaving health policy experts questioning the impact dwindling insurer participation will have on rates beyond 2017.

In Delaware, two insurers will sell coverage on the exchange next year—Highmark and Aetna.

While Highmark asked for the average rate hike of 32.5 percent for next year, Aetna customers may see their premium costs increase between 23.9 percent and 25 percent.

Whether those increases become finalized, though, is up to Delaware Insurance Commissioner Karen Weldin Stewart.

“These large rate increase requests are occurring in many states across the country, and I know they will be a burden for many Delawareans,” Stewart said in June.

The insurance commissioner said she recognized the proposed increases were “substantial” and promised to work to reduce them.

Still, consumers living in Delaware expressed outrage at Highmark and Aetna’s proposals in public comments to the state Department of Insurance.

Andrew Edmonds of Wilmington, who has coverage through Highmark, told the state his family’s insurance premiums will rise as much as 35 percent in 2017.

Edmonds said his family doesn’t qualify for subsidies, and he said he worries that if the state approves the insurer’s requested rates, “there will soon come a point where we will no longer be able to afford health insurance.”

In documents filed with state regulators, insurance companies pointed to the end of federal programs implemented under the Affordable Care Act as well as high medical costs as the reason for increased rates.

Aetna, which requested average rate increases of up to 24.9 percent for those with coverage on the exchange in Delaware, said the end of the transitional reinsurance program Dec. 31 will cause premiums to rise 5 percent, according to documents filed with the Department of Insurance.

The reinsurance program was one of three designed to transfer risk among insurers. Insurance companies selling coverage in the individual market collectively received reinsurance payments totaling $6.7 billion for 2014.

Highmark, meanwhile, said in a public information session held in June that many of its customers, most of whom were newly insured, had significant medical costs.

Frank Haver, the company’s actuarial director, told attendees that “several” customers in Delaware incurred more than $100,000 in medical claims and continued their coverage for only a few months out of the year.

“This behavior drives up the cost to insure the entire pool, as people use benefits and then discontinue paying for coverage once their health care needs have been temporarily met,” Haver said.

In Montana, insurers requested average rate increases ranging from a high of 62 percent (Blue Cross and Blue Shield of Montana) to a low of 20 percent (PacificSource).

Like Aetna in Delaware, Blue Cross and Blue Shield of Montana also pointed to the end of the reinsurance program as a contributing factor for its proposed 62 percent rate hike.

In a presentation given during a hearing last month, the company said that alone increased individual rates by 3 percent.

The company, though, also experienced high medical claims for insured customers. It said it paid out $1.26 for medical care for every dollar it brought in during 2015.

“Cost is really what’s driving our rate increases,” Michael Frank, president of Blue Cross and Blue Shield of Montana, said during the July 26 hearing in Helena.

PacificSource, which requested an average rate hike of 20 percent for 2017, said the end of the reinsurance program will cause premiums to rise by 5.2 percent.

According to the Office of the Montana State Auditor, roughly 80,000 Montana residents purchase insurance in the individual market, with 52,358 of those consumers buying coverage on the exchange. More than 45,000 Montanans receive a subsidy, but roughly 35,000 do not.

Aaron Albright, spokesman for the U.S. Centers for Medicare and Medicaid Services, said the average monthly premium for consumers purchasing coverage on the federal exchange increased just $4 per month last year, going from $102 to $106 “despite headlines suggesting double-digit increases.”

“People understand how the marketplace works, and they know that they can shop around and find coverage that fits their needs and budget,” Albright said in an email to The Daily Signal. “In addition, the vast majority of consumers qualify for tax credits that reduce the cost of coverage below the sticker price.”

But consumers who don’t qualify for subsidies, like Gavin in Delaware, are worried.

“My family, like many middle-class families who make just enough not to qualify for subsidies, is paying increasingly unaffordable premiums,” a woman from Silver Spring, Maryland, who is covered through CareFirst said in comments to regulators at the Maryland Insurance Administration. “Insuring two members of my family now costs more than $1,000 a month.”

Cigna Health and Life Insurance asked the state to raise rates for individual market plans by nearly 30 percent, according to filings with the Maryland Insurance Administration. Kaiser Foundation Health Plan of the Mid-Atlantic requested a 25 percent increase.

Evergreen Health Cooperative, one of seven co-ops remaining out of 23 that launched under Obamacare with federal loans, requested the lowest rate increase at 8 percent.

To remedy these rate hikes, Ed Haislmaier, a senior fellow in health policy studies at The Heritage Foundation, said the government would need to change insurance rating rules and allow insurers, rather than the exchanges, to verify customers.

“The point in which you do some of these things, you’re making very fundamental changes to the [Affordable Care Act],” he said.

After learning of Highmark’s request to raise rates an average of 32.5 percent, Gavin and Louellen Braithwaite realized they had three options: the couple could dig into their retirement savings to help pay premiums; Louellen could go without insurance and pay the annual $695 fine; or she could change to a “less luxurious” plan.

Gavin said it’s too risky to go without insurance—if his wife twists her ankle on the sidewalk or she gets into a car accident, they worry the cost of paying for health care out of pocket would likely exceed the cost of premiums.

And the couple can’t downgrade Louellen to a lower metal-level plan, which would be cheaper, since she currently has a bronze plan, the bare bones option.

So they’ve decided to dig into their retirement to pay for coverage.

“All you can do is keep digging into savings,” Gavin said.

Though the cost of their premiums has gone up, the 68-year-old said, he and his wife haven’t seen a change in the quality of their insurance. And they’ve been able to keep their doctor, whose practice is less than 2 miles from the couple’s home, he said.

Gavin has been submitting public comments to the state insurance commissioner to address his insurer’s requests to raise his rates since 2014.

He’s also contacted his elected officials in the state legislature, Gavin said, but he doesn’t expect them to do much.

He said he believes the best way to combat the rising costs of health insurance is through a single-payer system, and is closely watching what happens in Colorado in November.

There, voters will weigh in on a ballot measure that would create a government-run health care plan called ColoradoCare.

The Centennial State’s plan is the first in the country that would replace Obamacare, and Gavin  said he eventually would like to see a similar model in Delaware if it’s successful in Colorado.

“I think that would be a huge, progressive step to do that,” he said.