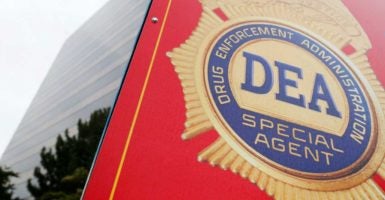 Well-meaning laws designed to nab high-level criminals have been twisted to siphon off money from law-abiding American citizens. The latest abuse of civil asset forfeiture laws involves air and rail travelers being targeted and fleeced by a federal agency.

The Drug Enforcement Administration is pulling Americans’ travel data en masse from airline and Amtrak records, profiling individuals with “suspicious” travel habits, and targeting them for searches as part of the nation’s drug interdiction efforts. But, according to a damning article last week in USA Today, the goal of this massive operation is neither to confiscate drugs nor to make arrests—it’s to seize and forfeit cash via civil asset forfeiture laws.

Seize, they have. Over 10 years, DEA agents deployed at 15 airports across the country have brought in $209 million in alleged drug funds, money that the DEA and its local agency partners spent with little oversight or accountability. But while agents generated a mountain of cash, they produced hardly any arrests, indictments, or convictions.

There are documented instances where local and state agents allow drugs to enter America’s cities so that they can then seize the money generated from drug sales. In other cases (such as this one captured on dashboard footage), drug task force agents refused to arrest or even question truck drivers smuggling half a million dollars in suspected drug money. All they wanted was the cash.

DEA agents deployed at 15 airports across the country have brought in $209 million in alleged drug funds.

Over a span of 10 years, DEA agents at 15 of the nation’s largest and busiest airports—including local law enforcement officers deputized as DEA agents—targeted individuals whose travel patterns were deemed “suspicious.” Something as innocuous as same-day round trip airfare, one-way airfare, paying cash for tickets, and checking a bag qualify as “suspicious” behavior.

Armed with a traveler’s flight information, DEA agents would then intercept him at the gate, inquire as to his travel plans, and, if he did not consent to a search, use drug-sniffing dogs to inspect his luggage.

The officers would deem a dog’s “alert” sufficient to justify searching the person’s luggage. Any cash found would then be seized as “drug money,” even if authorities found no drugs or testable amounts of drug residue. That is what happened to 24-year-old Charles Clarke, who had $11,000 seized at the Cincinnati airport in 2013. He is still fighting the forfeiture.

Another man, a nail salon owner named Vu Do, had $44,000 seized by DEA agents at JFK airport in New York, despite the lack of any apparent evidence tying the money to any crime. He attempted to challenge the seizure, but because his challenge was filed late, his cash was forfeited automatically in a process known as “administrative forfeiture.”

One might wonder what becomes of the suspected criminals whose alleged drug proceeds have just been seized. In most cases, they go free. In the world of civil forfeiture, no criminal charges are necessary, and the DEA seemed to be entirely uninterested in building criminal cases against the vast majority of the property owners whose money was seized.

In fact, George Hood, a former DEA supervisor in Chicago, told USA Today, “It was just easier to get the asset, and that’s where you make a dent in the criminal organization.”

To make a statement like that, one must assume the seized cash really is drug money, an assumption that is not always warranted. In fact, The Heritage Foundation has documented dozens of instances where wholly innocent people have had their cash, cars, and even their homes taken from them based on virtually no evidence of illegal activity.

And to the extent that seized money is derived from drug dealing or another illegal act, law enforcement organizations should be prioritizing making arrests and building criminal cases. Doing so is indeed harder than winning a forfeiture case, since the evidentiary standard in a civil forfeiture proceeding is significantly lower and the burden of proof is shifted to the property owner to prove, in effect, his own innocence. That does not, however, justify law enforcement officials treating civil forfeiture as a replacement for, or alternative to, a criminal conviction.

To those who have closely studied the issue of civil asset forfeiture, this article is more confirmation than revelation. The DEA has for some time diligently built out a network of confidential informants who are paid for tips leading to the discovery and seizure of large amounts of cash. The agency has even paid fellow government employees to provide this information.

Earlier this year, the Department of Justice’s inspector general concluded that a DEA arrangement to enroll Amtrak employees as confidential informants was improper. One of these employees was paid in excess of $850,000 over 20 years to provide tips that ultimately led to cash seizures. It is hardly shocking that, while that employee initially only responded to DEA queries, he soon realized he could make quite a lot more money by searching passenger records for “suspicious” activity on his own.

The inspector general also noted that the arrangement was entirely wasteful since, as federal employees, they were already obligated to report evidence of criminal activity.

The DEA also tried to register a Transportation Security Administration security screener as a confidential source, and pay him a bounty for tips that led to cash seizures. The DOJ inspector general noted that this, too, violated DEA policy, and that,

… asking the TSA Security Screener to notify the DEA of passengers carrying large sums of money in exchange for a reward based on money seized by the DEA violated the DEA’s interdiction manual, and could have violated individuals’ protection against unreasonable searches and seizures if it led to a subsequent DEA enforcement action.

The financial incentives inherent in civil forfeiture law are so powerful that the DEA is apparently willing to risk violating the constitutional protections of property owners in the relentless pursuit of cash forfeitures.

When civil forfeiture was first ramped up in the 1980s, it was meant to target the assets and ill-gotten gains of the worst criminal offenders, kingpins, and the money launderers who made their crimes possible. It was never meant to reach into the pockets of everyday Americans, much less strip them of legitimate and hard-earned money. Yet, the forfeiture status quo not only permits this, the incentives built into the law effectively encourage it. And law enforcement officials respond to these incentives.

As Hood, the former Chicago DEA supervisor put it in the USA Today article, “We want the cash. Good agents chase cash.”

It’s time to change this paradigm, and realign civil forfeiture to its laudable, but narrow and ancillary place in the criminal justice system. Heritage has outlined nine crucial reforms to state and federal civil forfeiture laws in its report, “Arresting Your Property.” States have begun the process of reforming their forfeiture laws; it’s time for Congress to follow suit.