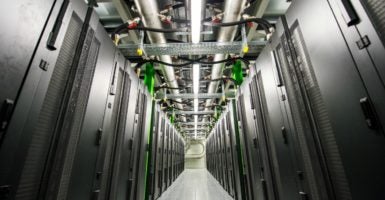 On Sept. 30, the U.S. is set to give up regulatory authority of the internet. (Photo: Alexander Heinl/dpa/picture-alliance/Newscom)

Arguing that internet freedom and the constitutional power of the purse are at risk, a coalition of more than two dozen civil society groups and activists are calling on Congress to lawyer up and sue the Obama administration.

The Commerce Department has violated federal law, the coalition of groups argued in an Aug. 10 letter to lawmakers, by finalizing plans to relinquish U.S. control of the Internet Assigned Numbers Authority.

Though led by digital specific interest group TechFreedom, the coalition includes a number of different organizations like Heritage Action for America and Americans for Tax Reform. And they all argue that more than just internet regulation is at issue.

In policy riders attached to two separate spending bills, Congress prohibited the executive branch from using taxpayer funding to surrender control of the internet. By using government resources to prepare to hand off control this September, the coalition argues that the administration violated the spending directive and federal law. Now they want Congress to sue.

“We agree that internet governance should work from the bottom up, driven by the global community of private sector, civil society, and technical stakeholders,” the coalition wrote. “Without robust safeguards though, internet governance could fall under the sway of governments hostile to freedoms protected by the First Amendment.”

A California nonprofit is invested with what’s called Internet Assigned Numbers Authority, IANA, allowing it to curate a registry of the world’s websites.

That body, the Internet Corporation for Assigned Names and Numbers, or ICANN, has operated under direct supervision of the National Telecommunications and Information Administration since 1998.

But the Obama administration announced two years ago that it intended to transfer that stewardship to a “global multi-stakeholder community.” Though Congress has acted twice to stop that effort, the administration moved forward with the transition plan.

U.S. supervision of ICANN and IANA is set to expire Sept. 30 and government officials argue that Congress only prohibited them from completing the transaction before that deadline.

After consulting “informally with both the House and the Senate” last year, a National Telecommunications and Information Administration administrator, Lawrence Strickling, concluded that Congress had not intended to leave the agency “like our hands are tied.”

“That’s not how our system works,” The Heritage Foundation’s Brett Schaefer, who also signed the Aug. 10 letter, told The Daily Signal. “Because there are check and balances, Congress has exercised a check by adopting that appropriations rider and the president signed it into law.”

Now Schaefer accuses “the administration of trying to circumvent the law” by moving forward with the transition.

Republicans have made similar arguments before. The party’s 2016 platform accuses President Barack Obama of “throwing the internet to the wolves” by sanctioning the transition. And several Republican senators and representatives publicly oppose it.

Rep. Bob Goodlatte of Virginia and Sen. Chuck Grassley of Iowa, who chair the House and Senate Judiciary committees, respectively, came out in opposition to the transfer this June, citing unanswered legal, constitutional, and human rights questions.

“The U.S. has served as a critical and responsible backstop against censorship and threats to openness and free speech on the internet. As a result, the internet has thrived,” Goodlatte told The Daily Signal. “The future of the internet as a medium for free speech, the flow of ideas, and global commerce is at stake, and must be protected.”

But under the Obama administration’s plan, Goodlatte said he’s “extremely concerned” about the future of the World Wide Web.

To halt the transition, the TechFreedom-led coalition urged congressional leaders to file suit against the White House like Republicans did in 2014 while challenging provisions of Obamacare.

“Suing to enforce the appropriations riders and extending it through [fiscal year] 2017 are amply justified by the extraordinary importance of the constitutional principle at stake,” the coalition letter said.

Berin Szóka, president of TechFreedom, argued that that inaction could do irreparable harm to Congress and the Constitution.

“If they don’t stand up for themselves here, they will regret it in the future,” Szóka told The Daily Signal. “Future congresses will find that the power of the purse has been diminished and there’s one fewer restraint upon the power of the imperial presidency.”