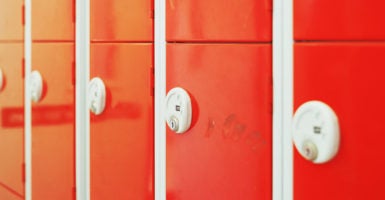 Adding to the handful of lawsuits involving transgender students across the country, lawyers representing a group of 51 families in a Chicago suburb asked a federal judge to temporarily suspend a school policy that grants a transgender student access to the girls’ restrooms and locker rooms.

“Every parent sends their kids to school expecting that the school is going to protect them at the most basic level—their safety, their privacy, their dignity,” Jeremy Tedesco, a lawyer representing the plaintiffs in the case, said after the hearing wrapped on Monday afternoon. “What we’re asking for is a temporary injunction that will allow the girls to continue to have single-sex facilities to themselves, free from the presence of the male students while the case is pending.”

Tedesco is a lawyer at the conservative nonprofit Alliance Defending Freedom, which, along with the Thomas More Society, filed a lawsuit on behalf of dozens of families from Township High School District 211 to stop the school from opening its showers and locker rooms to students of the opposite biological sex.

Township High School District 211, located in Palatine, Illinois, adopted the policy earlier this year after the Education Department, along with the Justice Department, threatened to take away the district’s federal funding.

During the hearing, lawyers representing the Education and Justice departments argued the concerns of these parents and students are being exaggerated.

“They’ve not come up with one example of concrete harm, let alone as to why they need relief now,” said Sheila Lieber, according to the Chicago Tribune. “The Department of Education is not required to adhere to plaintiffs’ one-dimensional definition of sex.”

Monday’s hearing came on the heels of a similar hearing involving North Carolina’s House Bill 2 law, which requires people in the state to use bathrooms and locker rooms in schools, public universities, and other government buildings based on the gender listed on their birth certificates. The hearing also trailed a decision by the Supreme Court earlier this month that allowed a Virginia school system to temporarily keep its bathrooms segregated by biological sex.

Tedesco said both the Virginia and North Carolina cases came up during the hearing, and that they “absolutely have implications for the [District 211] case.”

The dispute began in December 2013, when a transgender student—known as “Student A” filed a complaint with the Education Department against Township High School District 211. Student A was born male but identifies as a female.

If the school did not amend its policies to grant Student A access to the girls’ locker rooms and restrooms, the school “could potentially lose up to $6 million in federal funding,” Thomas Petersen, director of community relations at Township High School District 211, said.

Tedesco said this case is particularly important among the lawsuits involving the fight between transgender and privacy rights because it’s “the only case that has parents and students as plaintiffs resisting what the federal government has done.”

“It’s the difference between arguing in a factual vacuum and arguing with real facts, real clients, and real people who are hurt by government policies,” he added.

The Daily Signal contacted the American Civil Liberties Union of Illinois for comment, which is involved in representing Student A and two other transgender students in the district, but did not immediately hear back.

U.S. Magistrate Judge Jeffrey Gilbert with the U.S. District Court for the Northern District of Illinois heard arguments in the hearing.

It is unclear when Gilbert will issue a ruling, but Tedesco said the judge knew that with schools starting across the country, it’s an important and time-sensitive issue for the court to address.