What Conservatives Did to Pull Off Religious Liberty Win in California 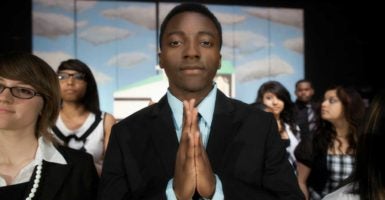 “We literally were able to see tens of thousands of people mobilize to make calls and to write their legislators, and to participate in the political process,” says William Jessup University President John Jackson. (Photo: Hill Street Studios Blend Images/Newscom)

California conservatives won a surprise victory this week, changing a state assembly bill that would have curtailed the freedom of private religious colleges.

“We literally were able to see tens of thousands of people mobilize to make calls and to write their legislators, and to participate in the political process,” William Jessup University President John Jackson told The Daily Signal in a phone interview.

It’s a victory that they hope will prove a bellwether for institutional liberty fights to come.

Facing a maelstrom of grassroots controversy, state Sen. Ricardo Lara, a Democrat, said Wednesday that he would remove the portions of his bill, SB 1146, that would have harmed the right of religious colleges to operate according to their principles.

Under the previous wording, SB 1146 would have ultimately blocked low-income students from receiving Cal Grants, California’s system of need-based education aid, if they attended colleges with policies such as bathroom use based on biological sex that violated the state’s LGBT policies. It also would have enabled students who feel discriminated against in light of these policies to bring a lawsuit against their college.

“Without a doubt, the unmodified version [of the bill] would have jeopardized Christian institutions and egregiously penalized all students of faith, especially Latino and African-American individuals,” Samuel Rodriguez, president of the National Hispanic Christian Leadership Conference, said in a statement.

Conservatives who opposed the measure say they are relieved by this change, but some stressed that the current version of the bill, while less concerning, may still negatively impact religious colleges. Jackson mentioned a new amendment that would make religious colleges release data on expelled students—ostensibly to ensure they were not expelled for discriminatory reasons.

“What we’ve indicated to the senator [Lara] is that we’ll have to review the bill and compare it to [Family Educational Rights and Privacy Act] regulations,” Jackson said.

But religious liberty activists say they are pleased to have an effective blueprint for success as that battle progresses, a blueprint that involves building national coalitions focused on preserving the rights of religious Americans.

In addition to grassroots mobilization, conservative nonprofits also played a pivotal role in the controversy.

The Becket Fund for Religious Liberty publicized the fact that three of four students affected by the loss of Cal Grants would be low-income minority students, circulating a petition that quickly garnered 100,000 signatures.

With an open statement, Andrew Walker’s, the director of policy studies at the Southern Baptist Convention’s Ethics and Religious Liberty Commission, commission publicly opposed the bill with the support of a diverse group of advocates and thinkers both on the ideological left and on the right. Notable signatories included law professors, administrators at religious colleges, Hispanic and Islamic leaders, seminary presidents, Christian denominational authorities, intellectuals at think tanks (including three from The Heritage Foundation), and conservative magazines.

The statement was publicly released on Tuesday. On Wednesday, Lara announced that he was changing the provisions.

“I just think that this was a multifaceted effort that really showed what effective communication and strategy can result in,” Walker told The Daily Signal in a phone interview. “You get your national coalitions working with your people on the ground, coupled with strong messaging—and religious liberty, we found out, is not dead in California.”

Continued defeats on issues of individual conscience, Walker said, showed that advocates of religious freedom still have a long way to go. But as lawmakers nationwide begin to bicker over the limits of freedom of conscience for religious institutions, the changes to SB 1146 represent a heartening opening salvo.

“There’s one discussion about private citizens engaged in commercial acts, like the bakers and the florists and the photographers, but what we see here is that the ability to protect religious institutions and their religious integrity remains very intact and very strong,” he said. “We’re going to have to turn especially and fight on all fronts, and that includes institutionally. We had a large institutional win in California.”

Jackson and Walker also stressed that conservatives must remain vigilant to oppose similar encroachments in the future.

“The sponsor of this bill has said that he intends to study this issue at further depth, and possibly reintroduce legislation like this next year,” Walker said. “We’re not naïve to the fact that this is an ongoing battle.”