The Heritage Foundation Stands for Freedom, Not Special Interests 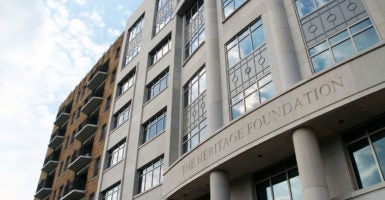 This week, The New York Times ran a two-part, two-day piece on its front page titled, “How Think Tanks Amplify Corporate America’s Influence.” It tried to indict multiple think tanks as pawns of corporate America and other special interests.

That The Heritage Foundation was not included in this indictment is no surprise to me, nor the hundreds of men and women here whose only interest is to advance the conservative principles of free enterprise, limited government, individual freedom, traditional American values, and a strong national defense.

In parts, it read as an attempt to paint all think tanks with a broad brush, which would be careless. Such efforts only feed a continuing campaign by the American left to force think tanks to reveal their donors, so they can be subject to harassment. We’ve seen similar chilling strong-arm tactics against free-market policy organizations like the American Legislative Exchange Council in recent years.

While attacking research organizations for their sponsors can be a bit specious—facts are facts, no matter who supplies them—Heritage shows that, through considerable time and effort, corporate sponsorship need not be the norm.

With more than 500,000 donors all across America, and over 85 percent of these members making gifts of less than $100 a year, The Heritage Foundation is the most broadly supported policy organization in the world. We answer to no individual, group, or corporation. We receive no government money. We will not accept research for hire from corporations who wish to pay for particular research projects. In fact, less than 5 percent of our annual revenue is from corporations.

This does not arise from antipathy toward American businesses or the free market, but rather a desire to preserve the independence and integrity of our research, as well as our ability to expose corporate cronyism—instances when the government colludes with private interests for the enrichment of a select few. Many crony politicians, corporations, and the establishment media organizations they own hate The Heritage Foundation for this reason. For us, it is a badge of honor.

Heritage is supported by patriots who believe in the Constitution and the principles that made America the strongest, most prosperous, and most compassionate nation in history. We fight for these principles every day in Washington, across America, and around the world. And we are the voice for hardworking, taxpaying Americans who want nothing more than to live their lives in freedom without government interference.

In a city where almost every building is home to another special interest, The Heritage Foundation at the Freedom Center stands in stark contrast. We like to say we are in Washington, but not of Washington, and we plan to keep it that way.