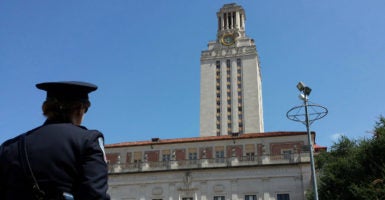 A police officer stands in front of the University of Texas tower, from which a sniper 50 years ago launched a shooting rampage that left 16 people dead, during a memorial in Austin, Texas, on Aug. 1, 2016. "[The professors] are apparently unaware that private citizens, including students, helped police in 1966 stop Charles Whitman [the tower sniper]," The Heritage Foundation's Hans von Spakovsky says. (Photo: Staff/Reuters/Newscom)

Three professors are fighting a Texas law that allows students to carry concealed handguns in their college classrooms.

Senate Bill 11, allowing concealed handgun license holders 21 and older (or 18 if active military) to carry in campus buildings, was signed by Texas Gov. Greg Abbott, a Republican, in June 2015. The law went into effect Aug. 1 this year.

Lawyers for Jennifer Lynn Glass, Lisa Moore, and Mia Carter, all professors at the University of Texas at Austin, made their case to a federal judge last week.

U.S. District Judge Lee Yeakel made no ruling during the court hearing after lawyers for the professors and for the university struggled to agree on the university’s rules and policies on concealed weapons, the Austin American-Statesman reported. Instead, Yeakel requested more information to clarify university concealed weapon policies.

“Compelling professors at a public university to allow, without any limitation or restriction, students to carry concealed guns in their classrooms chills their First Amendment rights to academic freedom,” the lawsuit says.

“There is no legal justification to deny licensed, law-abiding citizens on campus.”
—@KenPaxtonTX

“There is no legal justification to deny licensed, law-abiding citizens on campus the same measure of personal protection they are entitled to elsewhere in Texas,” Paxton said in statement.

Paxton filed a response with the United States District Court for the Western District of Texas Austin Division on Aug. 1 in opposition to the University of Texas professors’ request for preliminary injunction.

The professors “have no right under the First Amendment to violate the Second Amendment rights of students,” Hans von Spakovsky, a senior legal fellow at The Heritage Foundation, told The Daily Signal. “And it is insulting to law-abiding gun owners—categorizing them as crazies who will kill someone over a debate in a classroom.”

A 1995 Texas law allows concealed handguns to be carried in public, including on the grounds of public college campuses, but previously excluded campus buildings, the Statesman reported.

Under the new law, public institutions of higher education cannot “generally” prohibit license holders from carrying concealed weapons, but are allowed to establish “rules, regulations, or other provisions” restricting guns from places like labs with dangerous chemicals and regarding the storage of handguns in residential dorm facilities.

Private colleges can opt out of the law. So far, almost all private institutions of higher education have decided to opt out, The Dallas Morning News reports.

Moore, one of the plaintiffs, who teaches English and gender studies, told NPR that “it’s impossible to do our jobs with this policy in place.” She continued:

We all teach subject matter that is quite sensitive, and we all use very participatory, you know, pedagogically sound methods of trying to teach students how to state their views on controversial subjects, challenge one another and stand up for what they believe in.

“I am genuinely not equipped to keep students safe from a firearm in my classroom,” Moore added.

Allison Peregory, a 21-year-old University of Texas pre-law student, plans to get a state-issued concealed weapon license and carry on her campus, The Dallas Morning News reported.

“It’s important for people to have their right to self-defense be protected,” Peregory said, according to the Morning News.

Aug. 1 marked the 50th anniversary of a mass shooting that took place at the University of Texas at Austin.

“It is quite ironic; they [the professors] are apparently unaware that private citizens, including students, helped police in 1966 stop Charles Whitman, the University of Texas Tower sniper, when they grabbed their guns and started firing at the sniper in the tower,” Heritage’s von Spakovsky said. “One of those Texans, Allen Crum, even climbed to the top of the tower with a rifle to assist the policeman who eventually killed Whitman.”

Brian Bensimon, Students for Concealed Carry’s director for the state of Texas, told The Daily Signal that the professors’ lawsuit is “perplexing.”

“Concealed carry is allowed in our state capitol,” Bensimon said. “There’s plenty of open debate and lively discourse there.”

Students for Concealed Carry is trying to block a University of Texas rule that allows professors to ban concealed weapons from their individual office space. The group filed a complaint with Paxton on Aug. 4.

“Gun control advocates think that gun bans will make people safer,” John R. Lott, a columnist for FoxNews.com and author of “The War on Guns,” wrote in an op-ed. “But banning guns only ensures that law-abiding good citizens are disarmed, not the killers. Instead of bans improving safety, these bans attract killers and make it easier for them to commit crimes.”