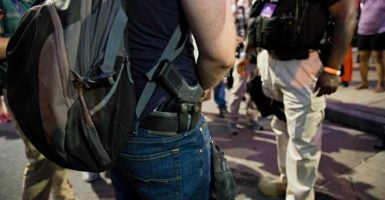 From 2007 through 2015, concealed-carry permits issued by state and local governments increased by 215 percent, according to a Crime Prevention Research Center report. (Photo: Nima Taradji/Polaris/Newscom)

Concealed-carry permit holders are nearly the most law-abiding demographic of Americans, a new report by the Crime Prevention Research Center says—comparing the permit holders foremost with police.

“Indeed, it is impossible to think of any other group in the U.S. that is anywhere near as law-abiding,” says the report, titled “Concealed Carry Permit Holders Across the United States 2016.”

From 2007 through 2015, permits issued by state and local governments increased by 215 percent, to more than 14 million Americans, according to the data.

The study compared permit holders to police, who committed 703 crimes from 2005 to 2007, and 113 of those were firearm violations.

“It is impossible to think of any other group in the U.S. that is anywhere near as law-abiding,” reads a report on concealed-carry permit holders.

The study refers to Texas and Florida, which it says mirror most other states, to compare permit holders with police and the overall population. It used data from 1987 through 2015.

“We find that permit holders are convicted of misdemeanors and felonies at less than a sixth the rate for police officers,” the report says. “Among police, firearms violations occur at a rate of 16.5 per 100,000 officers. Among permit holders in Florida and Texas, the rate is only 2.4 per 100,000.10. That is just one-seventh of the rate for police officers.”

Crime Prevention Research Center President John Lott, a noted economist, said the finding is not surprising considering the rigorous process it takes to get a concealed-carry permit.

“The type of person that would go through the process, one in which you can often lose the license for fairly trivial offenses,” Lott told The Daily Signal in a phone interview. “They are reluctant to use the the guns in a wrong way because they have a lot to lose if they do something wrong.”

The Daily Signal contacted gun control groups Everytown for Gun Safety and the Brady Center to Prevent Gun Violence, but neither responded.

However, the new report reads that in states without required permits to carry, crime has declined.

“In 2014, the seven states that allowed concealed carry without a permit had much lower rates of murder and violent crime than did the seven jurisdictions with the lowest percentage of permit holders,” the Crime Prevention Research Center report reads. “Indeed, the murder rate was 31 percent lower in the states not requiring permits. The violent crime rate was 28 percent lower. Compared to the rest of the country, the 25 states with the highest rates of permit-holding experienced markedly lower rates of murder and violent crime.”

In March, a federal judge cited a Brady Center legal brief in upholding the District of Columbia’s law requiring citizens to give a reason for applying for a concealed permit. After that, Brady Center President Dan Gross said, “The fact is, despite the repugnant lies and wild west fantasies peddled by the corporate gun lobby, communities with a greater number of loaded, concealed guns are markedly more dangerous, and their citizens’ lives are at greater risk.”

The Gross comment conflicts with public opinion, which the report attributes to the rise in concealed-carry permits over the course of President Barack Obama’s administration. A Rasmussen poll in June found 68 percent agree they “feel safer in a neighborhood where guns are allowed.”