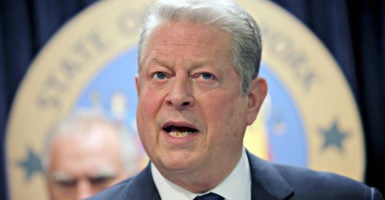 “They sought to write themselves out from open records laws their legislatures saw fit to write them into,” @ceidotorg’s Chris Horner says.

If Kilmartin and the other attorneys general prevail in the deal to keep select details secret, the ordinary citizen will be the loser, Chris Horner, a leading critic of climate change orthodoxy, said.

“It will mean that they can create privilege for what are otherwise public records, even when shared with ideological activists and donors, so long as everyone who wants to keep their scheming secret agrees in advance,” Horner told The Daily Signal.

The lawsuit, filed July 27 in Rhode Island Superior Court, calls for Kilmartin, a Democrat, to release records that were not previously disclosed in response to the legal organizations’ request in April.

At issue is a “Climate Change Conference Common Interest Agreement” that, email records show, Kilmartin’s representative signed along with representatives of 16 other state attorneys general. In the past few months, leading political figures and academics who support Obama’s policy on climate change have called for prosecuting those who disagree under the federal law known as RICO—the Racketeer Influenced and Corrupt Organizations Act.

Congress passed RICO in 1978 for the purpose of prosecuting mob crimes, but now climate change activists want to use it against organizations, corporations, and individual scientists who are not convinced that human activity is responsible for catastrophic climate change.

Kilmartin did not attend the press conference but released a supportive statement. On April 13, Energy and Environment Legal Institute and Free Market Environmental Law Clinic requested copies of correspondence in recent months “to or from” Gregory Schultz, a special assistant in the Rhode Island Attorney General’s Office who signed the common interest agreement with other state officials.

Schultz is a point of interest in the two groups’ suit because he was Kilmartin’s representative in preparations leading up to the press conference with Gore, according to the legal institute, which described the event as a “publicity stunt.”

‘They Didn’t Have to Turn It Over’

The groups hope to determine when the Obama administration’s allies first organized the “RICO scheme” against opponents of the president’s climate change agenda.

AGs United for Clean Power is led by New York Attorney General Eric Schneiderman and includes 25 states, cities, and counties. All but one of the 17 state attorneys general in the coalition are Democrats. Claude E. Walker, of the Virgin Islands, is an independent.

One of the email records released by Kilmartin’s office shows that Schultz agreed to sign off on a draft version of the “common interest agreement” in April. In it, the state attorneys general say they “share common legal interests” with regard to their climate change investigations and agree not to disclose certain information—prompting critics to call it a “secrecy pact.”

The nonprofit organizations also asked for copies of correspondence between Schultz “and any employee(s) of the New York Attorney General’s Office,” dated from Feb. 15 through April 13.

“The [Rhode Island] Attorney General’s Office turned over some records, but in other cases claimed exemptions they shouldn’t have taken,” Chaim Mandelbaum, a Virginia lawyer representing the legal groups, told The Daily Signal. “What was particularly egregious is that they decided not to turn over an attachment to an email, and this email showed that [Rhode Island] and other states had decided to sign this common interest agreement.”

This is the kind of agreement that’s signed among different parties when they are all part of the same litigation. But there is no litigation. None of the states the attorneys general represent are actually suing anyone here, but they still have this agreement. What’s interesting in Rhode Island is that they didn’t say this [email] attachment was exempt pursuant to the law. They just said we didn’t ask for it properly and therefore they didn’t have to turn it over.

But Rhode Island’s Access to Public Records Act is written “so clearly” that the two legal groups had no choice but to take action against the attorney general’s “egregious stonewalling,” Mandelbaum said.

Otherwise, the lawyer said, Kilmartin’s office would be “permitted to undercut the very nature of opens records laws.”

‘Get Out of FOIA Free Card’

Horner, a lawyer and senior fellow at the Competitive Enterprise Institute in Washington, told The Daily Signal that he sees Rhode Island fitting into a larger effort.

Horner, who is familiar with the suit against Kilmartin’s office, said “ideologically aligned” attorneys general and “certain outside activists” are trying to exempt themselves from laws, such as the federal Freedom of Information Act, that foster openness and transparency in government.

“They have sought to write themselves out from open records laws their legislatures saw fit to write them into, giving themselves a ‘Get Out of FOIA Free’ card for discussions of certain subject matters–not a suit or any discrete or even formal project, but instead broad, sweeping topics, so this [common interest agreement] is likely not worth the paper it is written on,” Horner said in an email to The Daily Signal.

If this purported but facially abusive attempt at a common interest agreement is upheld as a legitimate shield, then AGs [attorneys general] and other public officials covered by public records acts can get around that by exempting themselves from laws the people’s elected representatives chose to cover them under—for fear of abuse of office, of which, I suggest, this current abuse is perfectly illustrative. It will mean that they can create privilege for what are otherwise public records, even when shared with ideological activists and donors, so long as everyone who wants to keep their scheming secret agrees in advance.

Energy and Environment Legal Institute, based in Washington, D.C., describes itself as devoted to “strategic litigation,” “policy research,” and public education.”

Free Market Environmental Law Clinic, based in Virginia, describes its mission as “to provide a counterweight to the litigious environmental movement that fosters an economically destructive regulatory regime in the United States.”

In a new development, Energy and Environment Legal Institute obtained a copy of the common interest agreement in response to litigation involving the District of Columbia.

Mandelbaum said he wasn’t sure how this revelation will affect his case against Kilmartin.

“What remains unchanged is that Rhode Island law requires the attorney general there to release public records, regardless of what other states, or districts do,” he told The Daily Signal.

In a March 29 press release from Schneiderman’s office in New York, Rhode Island’s Kilmartin is quoted as saying:

Washington is mired by political gridlock. We cannot sit back and watch the dysfunction while nothing gets done, or worse, Washington rolls back the progress we have made in the recent past to address the issue of climate change. If Washington is not going to step up and recognize the crisis and find meaningful solutions, then it will be up to the states to do so. As a state that will incur significant negative impacts from global climate change, including sea-level rise and increased flooding, Rhode Island is committed to continuing the fight for common-sense regulation of greenhouse gas emissions from power plants and other large emitters. Contrary to what the Democrat attorney general has said publicly, the real danger to Rhode Island comes not from climate change, but from government policies in the form of renewable energy mandates, Mike Stenhouse, CEO of the Rhode Island Center for Freedom and Prosperity, told The Daily Signal.

The center, a free-market think tank associated with the State Policy Network, recently published a report that details the impact that current and pending renewable energy mandates could have on the Ocean State’s economy.

“What our report says is that if we make this conversion over to renewable energy it will cost our state hundreds of millions of dollars, eliminate thousands of jobs, and drive up electricity rates,” Stenhouse said.

Rhode Island already has a “relatively low carbon footprint,” he said, since 98 percent of its energy production is based on natural gas production.

“We are not going to get much of a reduction in our carbon footprint since we are already relatively efficient with natural gas,” Stenhouse said. “This would just be a horrible return on investment.”

The Rhode Island Center for Freedom and Prosperity is not part of the lawsuit against the attorney general, but did recruit a local lawyer to assist in filing the suit and has called on Kilmartin to disclose the requested information.

“It is clear that this is yet another means for which climate change deniers, big oil, and those they convince to do their bidding for them, are trying to forestall a legal and legitimate inquiry [by the 17 attorneys general],” Kilmartin spokeswoman Amy Kempe said in response to an inquiry about the lawsuit from The Daily Signal, adding:

This politically motivated filing will not stop the Office of the Attorney General from seeking the truth and does not dissuade the attorney general’s commitment to protect the environment or to investigate and hold accountable our biggest corporate polluters who try to buy and bully their way out of their responsibility.

By working in collusion with environmental groups to silence those who are opposed to the “global warming policy agenda,” Stenhouse argues, Kilmartin and other top Rhode Island officials are doing a disservice to the public and its constitutional right to dissent under the First Amendment.

“Three of our top political figures are all part of this national effort built around the religion of climate change,” he said. “They are clearly not thinking about what’s best for the people of Rhode Island.”

Whitehouse called for a RICO investigation of scientists and researchers who question the theory of man-made global warming, while Raimondo joined 17 other Democrat governors in signing onto a Governor’s Accord for a New Energy Future.

Kilmartin, who must respond to the lawsuit by Aug. 22, has the option of moving for it to be dismissed.

“We are pressing ahead on a number of fronts with open records laws to open as many doors as possible,” Mandelbaum said.

The New York lawsuit seeks records that relate to Schneiderman’s “efforts to use his powers as the state’s chief legal officer to investigate and even prosecute those who dissent from the ‘climate’ political agenda,” the legal institute said.

The lawsuit against Vermont Attorney General William Sorrell seeks records related to his office’s “ongoing investigation into those who dissent from green activists’ preferred views on climate change and the ‘climate’ political agenda.”

This story was updated to clarify the explanation of RICO.