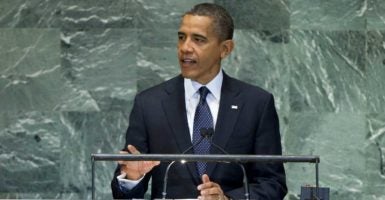 President Barack Obama has supported a ban on nuclear testing since his earliest days in office, but has been unable to rally support for ratification of a nuclear test ban treaty in the U.S. Senate.

Frustrated with this opposition and facing the end of his second term, The Washington Post reports, Obama will bypass Congress and seek a United Nations Security Council resolution that “would call for an end to nuclear testing” on the 20th anniversary of the Comprehensive Test Ban Treaty.

This is an extremely troubling decision that ignores fundamental concerns about such a ban and is dangerously erosive of the separation of powers outlined in the U.S. Constitution.

The Senate voted to reject ratification of the nuclear test ban treaty on Oct. 13, 1999. It did so for sound reasons. For example, the treaty does not define what constitutes a nuclear weapons test. Russia, and possibly China, conduct hydronuclear experiments that allow them to explore new weapons designs and train a more proficient workforce in the national nuclear laboratories.

Even worse, the treaty is not verifiable because one can conduct nuclear tests and experiments in very small spaces or can decouple weapons tests so they wouldn’t be detected. The treaty would not bring about a change of their behavior, nor make proliferation less likely. After all, the number of nuclear weapons states has increased since the U.S. stopped nuclear weapons tests.

The test ban treaty remains problematic today. American nuclear weapons are aging and the U.S. has not conducted a test since 1992. As designs depart from the tested envelope, the uncertainty with respect to expected performance of nuclear warheads will increase.

The United States must preserve an option for conducting yield-producing experiments to make sure its nuclear warheads are safe, secure, reliable, and effective. Such is the cornerstone of strategic deterrence and assurance of U.S. allies.

Going to the U.N. Security Council and ignoring these fundamental concerns is a deliberate affront to the separation of powers detailed in the Constitution, particularly Article II, which states that the president shall make treaties only with the advice and consent of two-thirds of the Senate. It continues a pattern, also used on the Iran nuclear deal and the Paris climate agreement, of circumventing Congress to advance the president’s priorities that lack congressional support.

Worse, the resolution is unlikely to have any effect on the nuclear proliferating countries that the U.S. is concerned about. Countries like North Korea, for instance, have continued to test in the face of existing Security Council resolutions and sanctions.

German intelligence has also warned that Iran “is still making extensive attempts to acquire materials to further its nuclear program,” despite the nuclear deal negotiated by the Obama administration.

“What it really does is allow countries like Russia and China to be able to bind the United States over our nuclear deterrent capability without the scrutiny of Congress,” said Sen. Bob Corker, R-Tenn. “Should we ever decide we may wish to test, we could be sued in international courts over violating a United Nations Security Council resolution that Congress played no role in.”