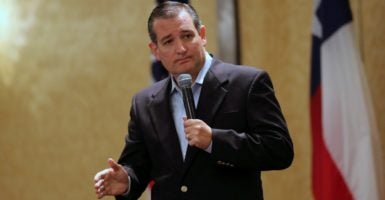 “Many news outlets are now reporting that nearly $400 million of this funding remains unspent,” the letter penned by the Republican Texas delegation, including Sen. Ted Cruz, says.(Photo: Aaron Josefczyk/Reuters/ Newscom)

The entire Texas Republican delegation in Congress signed a letter to President Barack Obama Friday, asking for answers on hundreds of millions in unspent money to fight the mosquito-borne Zika virus.

The administration pledged in April to spend $589 million from unused Ebola funds for Zika. However, only about $180 million of that was obligated, according to the Department of Health and Human Services.

The letter was signed by Sens. Ted Cruz and John Cornyn, both Republicans of Texas, as well as Republican House members from the state.

Obama has criticized Republicans in Congress for not approving his $1.9 billion request for Zika. The House passed a $1.1 billion package, but Senate Democrats are holding up the legislation.

“Your administration has not used all available tools to protect our constituents and the American people from the threat of the Zika virus.” @TedCruz, @JohnCornyn

Zika is spread by mosquitoes, but it can also be sexually transmitted and passed from pregnant mother to child. The virus is particularly dangerous for pregnant women because it can trigger microcephaly, which is a birth defect that causes a baby’s head to be smaller than expected and its brain to be underdeveloped.

The letter asks for a specific line item accounting for the $589 million that has been spent, or hasn’t.

“Many news outlets are now reporting that nearly $400 million of this funding remains unspent,” the Texas delegation letter says. “In other words, your administration has not used all available tools to protect our constituents and the American people from the threat of the Zika virus.”

The letter continues, “In addition to our request that your administration take increased measures to combat the Zika virus using existing available funds, we hope that you will join us in calling on members of Congress to stop the filibuster of additional funding for Zika prevention and response measures.”

A White House official told The Daily Signal Friday that just this week, the HHS awarded $5.1 million for faster Zika testing and the Centers for Disease Control and Prevention awarded $16 million for a birth defect registry to monitor complications that could have resulted from Zika. Further, the National Institutes of Health launched a phase 1 trial for Zika vaccines.

“So, I’ll let Republicans in Congress answer for why they squandered the last 5 months before we saw direct transmission of Zika in the U.S., but the president, HHS, CDC and NIH as well as public health officials across the country are focused on responding to this public health emergency with every resource that we have available,” the White House official told The Daily Signal.

“We are bound by federal procurement regulations and are obliged to follow the standard process for awarding that money, and much of it will move in July and August for remaining contract awards,” Hall said.