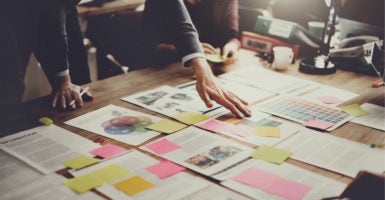 Countries around the world have made maintaining low corporate tax rates, as well as reducing rates, a priority in recent years. Meanwhile, the United States has stood on the sidelines.

As a result, the U.S. now has the highest corporate tax rate in the developed world, exceeding the Organization for Economic Cooperation and Development average by nearly 15 percentage points. By maintaining such a high corporate tax rate, the United States hinders its competitiveness in the global economy. >>> For this and other charts about the federal budget, visit Federal Budget in Pictures

These problems are reflected in Heritage’s 2016 Index of Economic Freedom, where the U.S. is ranked 154th out of 178 countries in fiscal freedom.

In June, House Republicans released a blueprint for tax reform, which included proposals to change the way the government taxes corporations and other businesses. Reforms clearly are needed.

In the end, reforming the corporate tax rate is about making America a place where domestic and foreign businesses can invest, grow, and prosper while supporting jobs right here at home.