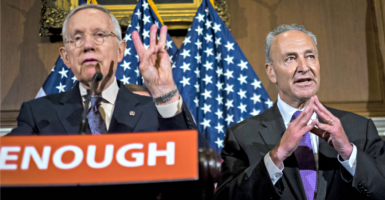 Some of the Senate’s most liberal Democrats, demanding that 22 national and state-based think tanks disclose their donors, disparaged them as being part of a network of free-market policy organizations the senators accuse of “laundering” identities while denying climate change exists.

The existence of the conservative and libertarian policy research and education organizations, Senate Minority Leader Harry Reid and eight fellow senators wrote in a letter to some of the organizations’ leaders, suggests the extent of a “web of denial” about man’s contribution to global warming, or climate change.

“Because your organizations do not regularly disclose where your donations come from, we cannot know for sure how deep and wide the web of denial truly is,” the nine senators write.

Reid and the other senators also assailed the Virginia-based State Policy Network as “a network of organizations bound together by common funding, shared staff, and false messages.”

The network’s members include private, nonprofit Washington institutions such as The Heritage Foundation, Competitive Enterprise Institute, and Americans for Tax Reform, but also private, free-market think tanks in Georgia, Nevada, New Mexico, Wisconsin, and other states.

“Freedom of speech does not prevent us from speaking out when your organizations, as well-funded agents of hidden principals with massive conflict of interest, subject our constituents to an organized campaign to deceive and mislead them about the scientific consensus surrounding climate change,” the senators say in their letter to representatives of Heritage and the 21 other think tanks and policy organizations.

Ashley Varner, senior director of strategic communications for the American Legislative Exchange Council, or ALEC, which is not a formal member of the State Policy Network, called the senators’ letter alarming.

“It should alarm everyone, Democrats, Republicans and Independents, that federal officials would abuse their office to intimidate groups of people from exercising their rights to speech and assembly,” Varner said in an email to The Daily Signal.

“If the debate on climate change in the public arena represents the future of open discussion, then the notion of free speech as embodied by the First Amendment is in serious peril,” Fred Birnbaum, vice president of the Idaho Freedom Foundation, told The Daily Signal.

The Democrats challenge the organizations for questioning them, saying “there is a simple thing you can do to prove us wrong: disclose all of your donors.”

The Senate’s No. 2 and No. 3 Democrats, Minority Whip Richard Durbin of Illinois and Charles Schumer of New York, signed the letter along with Reid.

Bernie Sanders of Vermont, an independent who caucuses with the Democrats, also signed.

The letter, dated July 22, responds to a critical letter sent to 19 Senate Democrats 10 days earlier by the coalition of leaders. The leaders did not write Sanders, although the former Democratic presidential candidate signed the reply along with eight of the 19 Democrats.

SPN has received nearly $20 million from identity-scrubbing, Koch-funded Donors Trust and Donors Capital as well as money directly  from Koch family foundations. SPN serves as an identity launderer as well, passing along large sums of money to several of the groups on your letter…

The State Policy Network describes itself as dedicated to “improving the practical effectiveness of independent, nonprofit, market-oriented, state-focused think tanks.”

The Democrats and Sanders single out three state-based organizations that belong to the network, questioning hundreds of thousands in donations to the Idaho Freedom Foundation, the Florida-based James Madison Institute, and the Michigan-based Mackinac Center for Public Policy.

The Daily Signal, the multimedia news organization of The Heritage Foundation, obtained copies of the original letter and the reply from Bridgett Wagner, Heritage’s vice president for external relations, who was among those who wrote the senators.

Wagner and the other signers said they used their employers’ names for identification purposes, and were not speaking for them.

In their July 12 letter, Wagner and officials with the 21 other organizations express concern that the Democrats who that day staged criticism of climate change skeptics on the Senate floor had put together an “enemies list” of “intellectual foes.”

The conservative free-market advocates tell the senators that their “enemies list” could quell free speech:

Your enemies list groups together organizations that themselves maintain differing perspectives. While you have singled us out, labeling us as the enemy, we don’t even always agree with one another. And that’s the point: Disagreement breeds solutions. We hear you. Your threat is clear: There is a heavy and inconvenient cost to disagreeing with you. Calls for debate will be met with political retribution. That’s called tyranny. And, we reject it.

In their reply, nine senators argue that because Heritage and the other private organizations don’t typically disclose donor information, it is difficult to determine how “deep and wide” the “web of denial” about climate change is.

The senators, dismissing “perceived grievances,” cite the Climate Investigations Center as determining that the groups whose officials signed the letter of complaint had received more than $92 million from “the Koch family, Donors Trust, Donors Capital, and Exxon Mobil.”

The senators describe a web of “climate change denial” that is “so big and sophisticated” that it dupes the public into believing “it is not a single special interest-funded front.”

The 19 Democrats took to the Senate floor July 12 to accuse free-market groups and others of spinning that “web of denial” on global warming.

“It is no surprise these progressive senators would conflate the debate on climate change with a discussion of those who donate to our organizations,” Birnbaum of the Idaho Freedom Foundation, told The Daily Signal.

In a written response to the senators’ criticism of his organization, Birnbaum added:

The reality is that those who have publicly called into question elements of the climate change story have faced personal and professional threats. So when these progressives say, ‘we would just like to know whom it is we are debating’ what they are really stating is that they would just like to know who they can intimidate with the full police power of the federal government.

The Idaho Freedom Foundation is a nonpartisan, nonprofit educational research institute that promotes free-market solutions and acts as a watchdog on government.

“The Mackinac Center for Public Policy has been publicly disparaged by U.S. senators simply because we oppose politicians using the federal courts to criminalize debate and intimidate their political opponents,” John Mozena, the center’s vice president for marketing and communications, said.

Mozena was referring to efforts by state attorneys general, environmental organizations, and others to punish climate change skeptics. In his formal statement provided to The Daily Signal in response to the senators, he added:

The Senate—and the nation—look back with shame on the era when Sen. Joseph McCarthy led his fellow senators down a path of guilt by association and conviction by allegation. McCarthy’s actions stained our nation and we couldn’t stand by and silently watch history repeat itself, even though we knew we would expose ourselves to a modern reinterpretation of his methods.

Mozena said the center has fought for its principles for 28 years, “regardless of politics,” including working in Michigan for government transparency. Allies there, he said, included the ACLU of Michigan and the Sierra Club’s Michigan chapter.

Last month, he noted, Mackinac Center sued Michigan’s Republican governor over his administration’s delay in responding to its request for records on the Flint water crisis under freedom of information laws.

Given our demonstrated, decades-long commitment to these principles, we don’t need lectures from senators in which they try to analogize their campaign finance restrictions with our supporters’ right to privacy. They are public officials with responsibilities, we are private individuals with rights. No matter how much they’re willing to ignore their ‘sense of decency’ and abuse their offices for political gain, we will not be intimidated into sacrificing those rights and we will continue to support any organization that finds itself on their enemies list.

The 10 Senate Democrats who received the leaders’ letter but didn’t join Reid and the others in the response are Richard Blumenthal of Connecticut, Ben Cardin of Maryland, Christopher Coons of Delaware, Tim Kaine of Virginia, Jeff Merkley of Oregon, Gary Peters of Michigan, Jack Reed of Rhode Island, Brian Schatz of Hawaii, Jeanne Shaheen of New Hampshire, and Tom Udall of New Mexico.