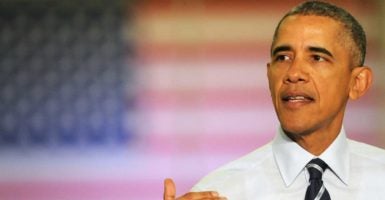 Civil service laws have made it nearly impossible to remove government bureaucrats from their jobs. President Barack Obama has a chance to place many of his political appointments in these secure positions for life and make it difficult for a new president with a different agenda to enact reforms.

It’s a process commonly known as “burrowing,” in which political appointees move into career government status. Unlike political appointees, federal workers in the civil service system are difficult to fire, are hired through a merit system, and carry over throughout administrations, Republican or Democrat.

The House Oversight and Government Reform Committee is looking into how many Obama political appointees will be transitioning to the civil service.

“For the federal government to regain the trust of the American people, we must be able to ensure that the federal hiring process is fair and open to everyone, not just the politically influential,” oversight committee member Rep. Jim Jordan, R-Ohio, told The Daily Signal in an emailed statement.

“Unelected bureaucrats in Washington make decisions that impact everyday Americans, and even while we work for smaller government in Congress, we need to make sure that the federal employees here are the best and brightest, not the most well-connected.”

The Pendleton Civil Service Reform Act of 1883 was passed in order to stop raw political party appointments from securing federal government jobs. The law introduced the merit system into hiring practices and made numerous positions untouchable after they were filled. Civil service law has been updated several times since the Pendleton Act’s passage, but the basics remain the same.

“We must be able to ensure that the federal hiring process is fair and open to everyone, not just the politically influential.” @Jim_Jordan says

Donald Devine, who served as the Ronald Reagan administration’s director of Office of Personnel Management, said he discouraged the transition when he served. He added, the conversion from political appointee to career civil service has as much to do with job security as pushing an agenda.

“Contrary to all the nonsense, you can’t get better benefits and the pay is very competitive,” Devine told The Daily Signal in a phone interview. “I’m sure Obama would love to get his people in there. I would suspect this administration is probably encouraging this. … A lot of people who are in the career civil service system are political anyway. They vote about 60 to 70 percent Democrat.”

Devine, now a senior scholar at the free-market advocacy group Fund for American Studies, added there was a push in the 1980s among some Republicans to try to lock Reagan officials into the government, which Devine also opposed.

“During my time, some were saying, ‘Let’s get all the conservatives into the bureaucracy.’ I said if we do that, they won’t be conservatives anymore,” he said. “It’s a silly thing for Republicans to want to, but it makes sense that Democrats would work overtime to do this.”

“The reason is different political philosophies,” von Spakovsky told The Daily Signal in a phone interview. “Republicans generally don’t like big government and Democrats might think a government job is the best they’ve had and it gives them the chance to enact their progressive utopia.”

He noted that when he served in the George W. Bush Justice Department, a former political appointee of President Bill Clinton had transferred to the position of a civil service DOJ lawyer. The attorney’s legal briefs were “completely untrustworthy” and meant to undermine Bush administration policies.

“We had enormous problems with such individuals when I served in the Justice Department during the Bush administration,” he said. “They did everything they could to sabotage and interfere with the policy directives and priorities of the administration while protected by onerous civil service rules.”

However, Democrats raised significant concerns about conversions in 2008, the final year of the Bush administration, when about 26 conversions occurred.

Former Sen. Joe Lieberman, of Connecticut, requested the Bush White House Office of Personnel Management provide him with a full accounting of conversions from April through December of 2008.

A Congressional Research Service report from 2012 found that 158 presidential appointees from the Clinton administration and 135 Bush political appointees moved to civil service jobs.

The federal government has about 3,200 political appointees, out of millions of federal employees, according to The Washington Post. The personnel management office did not yet confirm that number. Generally, the burrowing employees are low-level political employees.

Office of Personnel Management press secretary Samuel Schumach said his office does not have a way to determine how many Obama political appointees have or will apply for civil service employment, but explained the process.

“Political appointees are free to apply for positions in the civil service as any other applicant. If an agency selects a current or former political appointee (in the last 5 years), the agency is required to seek Office of Personnel Management review and approval prior to appointing them,” Schumach said in a written statement to The Daily Signal. As the Obama administration is winding down, House Oversight and Government Reform Committee Chairman Jason Chaffetz, R-Utah, has asked 23 executive branch agencies to account for how many political appointees are seeking career jobs with civil service protection.

“Such conversions, sometimes referred to as burrowing, run the risk of favoring political staff at the expense of more qualified career applicants,” Chaffetz’s July 20 letter warned.

“Conversions also create morale problems, in that qualified career applicants who lose out on promotions to applicants from the agency’s political staff can rightly wonder if the process was legitimate. The appointing officials must ensure each conversion of a political appointee to a career position results from a fair and open competition. Hiring decisions must be free from political interference, legitimate, and justified.”

The ranking member of the oversight committee, Rep. Elijah Cummings, D-Md., told The Washington Post the Chaffetz inquiry was “yet another unsurprising attack on federal workers.”

“The solution to dealing with a few bad employees is not to change civil service laws to undermine the due process rights of all federal employees but to find ways to help agencies and managers implement existing authorities more efficiently and effectively to discipline bad actors,” Cummings said.

“New rules should be implemented that prevent any political appointee from getting a civil service job without a waiting period after they leave their political appointment—at least a year and perhaps even longer,” he said.

A Government Accountability Office report in 2010 found, “Conversions of political appointees to career positions must conform to merit system principles requiring that selection be determined solely on the basis of merit after fair and open competition.”

The accountability office found from May 1, 2005, to May 30, 2009, 143 former political appointees and congressional employees converted to civil service jobs. In most cases, the process was done properly, according to the report.

For seven of these conversions documentation indicates that agencies may not have adhered to merit system principles, followed proper procedures, or may have engaged in prohibited personnel practices or other improprieties. Some of the improper procedures included pre-selecting particular individuals for career positions and selecting former political appointees who appeared to have limited qualifications and/or experience relevant to the career positions. Of the seven conversions, five will be reviewed by [the Office of Personnel Management]; one involves an issue most appropriately reviewed by the agency’s ethics officer, and one does not warrant further action as both the official solely responsible for the conversion and the convertee are no longer with the agency.