How Stand Up Virginia Is Working to Hold Rogue Prosecutors Accountable 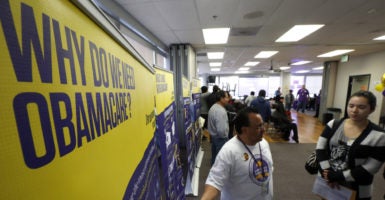 Anthem, one of the largest health insurance companies in the country, told the Obama administration it would expand its book of business on Obamacare's exchanges in nine states if the federal government approved its pending merger with Cigna. The Justice Department filed a lawsuit challenging the merger last month. (Photo: Lucy Nicholson /Reuters/Newscom)

Despite projections that it’s losing money this year, Anthem offered to expand its business on Obamacare’s exchanges in nine states if the federal government allows the company to move forward with its merger with Cigna.

The company is currently in the process of acquiring Cigna in a $48 billion deal. But the Justice Department announced last month it is challenging both Anthem’s merger with Cigna and Aetna’s pending merger with Humana. The Obama administration filed a lawsuit to block Anthem’s deal with Cigna and was joined by 11 states and the District of Columbia.

Eight states and the District of Columbia joined the Justice Department’s challenge to Aetna’s deal with Humana.

If the four insurance companies succeed in court, allowing the mergers to proceed, the number of major health insurers in the U.S. would decrease from five to three—a change that President Barack Obama’s administration warned would “fundamentally reshape the health insurance industry.”

“It these mergers were to take place, the competition among these insurers that has pushed them to provide lower premiums, higher-quality care, and better benefits would be eliminated,” Attorney General Loretta Lynch said during a press conference announcing the lawsuit.

In response to the lawsuit, a spokesman for Anthem said the company plans to fight the Justice Department in court.

“Today’s action by the Department of Justice is an unfortunate and misguided step backwards for access to affordable health care for America,” Tony Felts, a spokesman for Anthem, said in a statement.

In an interview with The Daily Signal, Marianne Udow-Phillips, director of the Center for Healthcare Research and Transformation at the University of Michigan, said Anthem likely linked future expansion into more Obamacare exchanges with its pending merger as not only a point of negotiation, but also as a signal that the company could withstand future financial hits from the exchange business.

“What they’re saying is they would have more financial stability if they had a larger market share with Cigna, and Cigna would bring them the large employer market that could help them offset some of these losses,” she said. “They would be more financially sound and that would enable them to weather more losses in the individual market.”

Anthem CEO Joseph Swedish last week reaffirmed the company’s commitment to continue selling coverage on Obamacare’s exchanges, even though the company is projected to lose money on that portion of its business this year.

“Our acquisition of Cigna will help stabilize pricing in this volatile market, enabling Anthem to continue its commitment to the public exchanges,” Swedish said.

Still, health policy experts say Anthem’s proposal to expand into more states is a negotiating tactic, since its expansion on Obamacare’s exchanges is conditioned on approval of its merger.

Ed Haislmaier, a senior fellow in health policy at The Heritage Foundation, said it’s clear Anthem is trying to persuade the administration to approve its merger with Cigna.

“That’s a political call,” he said of their promise to expand into more Obamacare exchanges. “It’s pretty transparent here, but it’s a Hail Mary pass.”

While Anthem offered to boost its presence on Obamacare’s exchanges, pending completion of its merger, Humana announced it plans to scale back significantly.

The same day the Justice Department filed its lawsuit to block Humana’s merger with Aetna and Anthem’s merger with Cigna, Humana said it would be exiting most exchanges it previously had a presence on.

If Anthem and Cigna ultimately win in court, defeating the Justice Department, the companies would combine to become the largest health insurer in the country, claiming 21 percent of the health insurance market, Udow-Phillips said.

But she noted that there is a “huge amount” of research showing that mergers can lead to more savings, particularly in administrative functions and a shifting of costs to nurses and lower-paid providers.

Whether those savings are passed on to consumers or not, though, is up for debate.

“The real core question and the argument in favor of mergers is whether or not it gives the health plans more market power to negotiate more cost effective rates with providers. Some of the research shows that has happened in cases,” Udow-Phillips said, continuing:

There’s a question about the value of a lot of health care. Saving money in health care is a good thing. Passing it on to consumers is really what we would hope would happen instead of benefitting shareholders or executives.