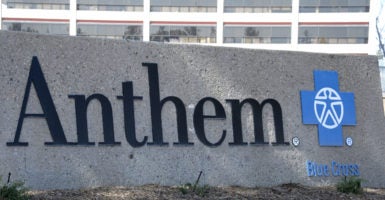 Anthem, one of the nation's largest insurance companies, announced it is now projected to lose money on the plans sold on Obamacare's exchanges. The company previously expected to break even. (Photo: Michael Nelson//EPA/Newscom)

One of the country’s largest insurance companies is now expected to lose money this year after emerging as one of the few insurers that made money on Obamacare’s exchange business early on.

Anthem, one of the country’s five largest insurers, was projected to be successful in its business on Obamacare exchanges earlier this year. But last week, the company announced it’s expecting to see “mid-single-digit” losses on coverage sold on Obamacare’s exchanges.

Joseph Swedish, Anthem’s CEO, told investors on a conference call it experienced higher medical costs than originally anticipated and would be looking to raise premiums substantially to make up for the losses.

“We’re going to be very mindful of what price increases are awarded to us,” Swedish said of rate increases ultimately decided by state regulators, according to The Wall Street Journal.

Swedish also said Anthem is going to be making “accurate business decisions going into 2017 and beyond regarding our continued engagement on a broad scale in the public exchange space.”

Anthem’s participation outweighed that of other large insurers selling on Obamacare’s exchanges. With 923,000 exchange enrollees, the company sold coverage in 14 states.

Anthem’s initial projections differed from those of its competitors. While some, like UnitedHeathcare, already warned of losses for 2016, Anthem said it planned to break even. The company made money in 2014 and broke even last year.

Marianne Udow-Phillips, director of the Center for Healthcare Research and Transformation at the University of Michigan, said the market still has to adjust to the changes brought on by the Affordable Care Act.

“It’s not a stable market, but the plans are trying to figure it out,” Udow-Phillips told The Daily Signal in a phone interview. “For the first few years, they wanted to get more market share, so they priced aggressively to get people to enroll and discovered it was too costly.”

Insurers lacked the relevant historical information to predict accurately how much it would cost to cover consumers purchasing insurance on the new exchanges launched under the Affordable Care Act.

Because of this, Udow-Phillips and health care experts said insurance companies, including the nonprofit co-ops created under the health care law, priced their premiums too low to draw in new customers.

Insurers, though, ended up losing money, since most of the people buying coverage on the exchanges were previously uninsured. As a result, insurance companies had to pay out more in claims than originally anticipated.

“In some cases, it appears some of those who enrolled were sicker, and many of them had untreated illnesses,” Udow-Phillips said. “Now, they’re starting to get treated, and it means costs were higher.”

Anthem has committed to selling insurance on Obamacare’s exchanges, and the company even offered to expand onto Obamacare exchanges in nine states if the Obama administration approves its pending merger with Cigna.

To make up for its losses, Anthem has proposed significant increases to premium prices in some of the states where it’s selling on Obamacare’s exchanges.

In Connecticut and Colorado, the company asked state regulators for an average rate increase of 26.8 percent.

Anthem’s rates rose by more than 16 percent in California, and in Kentucky, customers purchasing insurance from the company in the individual market will see their premiums rise 22.9 percent.

Like Anthem, many insurance companies—including the big players in the health insurance market—have struggled to make money from business on Obamacare’s exchanges.

UnitedHealthcare decided to leave most of the exchanges where it previously sold coverage, UnitedHealth Group CEO Stephen J. Hemsley announced earlier this year. Hemsley said the company is projecting losses of more than $1 billion for 2015 and 2016 combined from its exchange business.