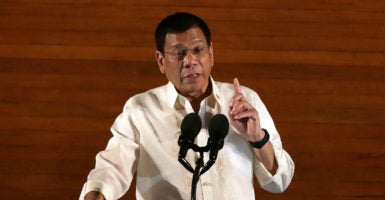 My family members in northern Virginia, who disdain cold weather, have an aphorism that captures our thoughts about climate change: “Global warming, every little bit helps!”

The new Philippine president, Rodrigo Duterte, may not be rooting for warming like we are, but his repudiation last month of the Paris climate treaty is particularly inconvenient for those pushing an activist policy agenda.

The fundamental truth is that every nation should reject economically unsound policy initiatives that harm their citizens and are devoid of any meaningful climate benefit, regardless of mainstream climate change projections.

Geologic climate change is undeniable; that modern man can have an impact on the climate is certainly plausible and merits careful study. The seemingly large, scientific agreement that man has had a material impact on the climate in the past 150 years and is likely to have a greater impact in the future, though not a true consensus, becomes less unified when the focus turns to how significant and how likely each of those effects may be over the next century.

It is the nature of science that some predictions and models will be revised over time. But overall, our scientific understanding of the climate and man’s impact on it will continue to improve in the next few decades. I’m eager for those developments for several reasons, including that the scientific studies genuinely interest me.

But even assuming the current projections of those who claim to speak for the climate change consensus prove to be accurate, the temperature increase in the next 20 years will be exceedingly tiny by the standard of world history.

According to the Intergovernmental Panel on Climate Change, the temperature increase for 2016-2035 relative to 1986-2005 without significant global climate initiatives may be 0.3 to 0.7 degree Celsius. Over the longer term, the panel’s mid-range scenarios predict average temperatures to increase by about 1.5 to 3 degrees by the end of the 21st century.

Given my wife’s and my disdain for winter, a 0.3 to 0.7 degree increase over the next 20 years is not remotely enough to suit our tastes. And if we are lucky enough to live 40 more years, we think an additional half-degree warming in our last two decades will be equally inadequate.

Putting our personal preferences aside, there would be more important net winners and losers with increasing concentrations of carbon dioxide and other greenhouse gases in the atmosphere. For example, there could be improved crop yields in some regions while other areas may be harmed by various impacts. Climate change activists argue that the global net harms easily swamp any benefits. Yet even assuming that is the case doesn’t end the policy debate.

The critical policy debate is what costs are reasonable or necessary to impose now, especially since the possible scenarios (outlined by the Intergovernmental Panel on Climate Change and other scientists) still include a fair degree of uncertainty as to their relative likelihood and range of impacts.

The supposedly debate-ending claim that is often made is that even a modest sea level rise will devastate poor people who live near the coast, especially those who live in the tropics, where warming and other impacts may be greater.

The climate change panel’s mid-range projection is that sea levels may rise by a little less than a foot in the next 50 years. That doesn’t end the policy debate for many reasons, including the following considerations:

Returning to Duterte’s repudiation of the Paris treaty, what makes it particularly inconvenient for the climate policy activists is that the Philippines fits the profile of a nation most at risk from climate change. The nation is composed of over 7,500 tropical islands, with a rapidly growing population, currently over 100 million. Many of those millions live near the coast, which is regularly battered by typhoons.

Yet Duterte did not even pay lip service to the Paris treaty his predecessor signed. Instead, he said he wanted to kick an unnamed ambassador from an industrialized nation who was pressuring him to follow it.

The Philippines is still industrializing, and Duterte made it perfectly clear it is not going to curb its economic development in the near term out of concern for climate change. Indeed, he said it would be “stupid” and “absurd” to try to meet the targets urged on the Philippines since that would stymie its growth—for little to no meaningful impact on global temperatures.

The Paris treaty, assuming it goes into force when the requisite number of nations causing 55 percent of global emissions join it, would still be largely symbolic because the signatories set their own targets for reducing greenhouse gases and there is no effective enforcement mechanism.

Thus, it would have been easy for Duterte to pretend to stay onboard with the agreement and even demand payments that are planned for developing nations to meet their targets. (The U.S. has already contributed $500 million to the Green Climate Fund.) Other nations will surely play that game.

Producers in emerging nations may benefit when the others become less competitive, even ignoring the potential bribes. But in contrast to merely signing up for an international kabuki dance, it would be the height of folly for developing nations to actually implement most of the policies Western climate imperialists urge.

Duterte has seemingly concluded that no conceivable climate change goal is worth even the tiniest compromise on his country’s future growth curve. Given that growth in any period is compounded many times over in the next century, who can blame him? (Although there’s no need to threaten to attack foreign ambassadors, except rhetorically, which is probably what he was clumsily attempting.)

Duterte deserves praise for his honesty—as well as his wisdom in focusing on economic growth that will be much more important to the Philippine people in the long run.

Unless America also changes course, only “stupid” nations like ours and others in Europe will attempt “absurd” initiatives like the Clean Power Plan that will put a drag on our already sluggish economies and cause additional industrial production and jobs to move elsewhere.

At least my family will know that such costly and counterproductive policies won’t materially affect climate change one way or the other. And we’ll keep hoping that the Intergovernmental Panel on Climate Change projections of mild warming will prove accurate in our lifetimes. To us, every little bit helps.