These Climate Change Regulations Will Increase Your Electric Bill 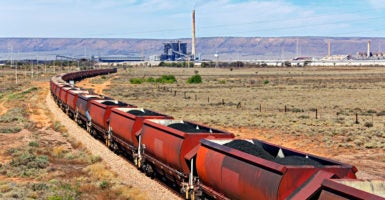 A trainload of coal arrives at a power station. EPA regulations to counter climate change will increase household spending on electricity between 13 and 20 percent over the next 20 years, a Heritage Foundation report says. (Photo: iStock Photos)

Amid the summer heat, American households are thankful for affordable, reliable air conditioning. But the Obama administration’s war on coal is going to drive up energy prices for families who want to keep cool in the summer and stay warm in the winter.

A recent study by Heritage Foundation economists estimates that the administration’s regulations to counter global warming, or climate change, will increase household spending on electricity between 13 and 20 percent over the next 20 years.

Americans have plenty of reasons to be concerned with the administration’s regulations on new power plants, and states have good reasons to challenge these regulations in court.  Here are three:

Higher energy costs hurt the poor the most. If the Environmental Protection Agency’s regulations on new power plants stand, they will take a reliable power source off the market.

For instance, Maryland coal production fell 62 percent between 2005 and 2013, according to the Maryland Department of the Environment. Though this decline is partially a result of cheap natural gas prices, many also point to EPA regulations for the industry’s decline.

The decline in coal production is problematic because coal and carbon-based conventional fuels made up 87 percent of America’s primary energy between 2003 and 2013.

In fact, electricity prices are 15 percent lower in those states that rely most on coal.  Unnecessarily driving out coal production will cause electricity prices to increase, disproportionately hurting low-income Americans who spend a greater portion of their budget on energy bills.

The EPA’s regulations of future power plants will have detrimental impacts on coal mining towns.

Alabama coal worker Renea Aldridge said: “Think about the families you’re affecting. Think about all the jobs you’re closing down. I keep thinking the coal industry will never be the same again.”

The EPA’s latest regulations of newly built coal power plants will seriously harm these coal towns. And because of the stringent requirements for new plants, many towns that might otherwise have had a coal plant built will be deprived of the economic benefits.

A few hot days does not mean the planet is experiencing more heat waves because of man-made greenhouse gas emissions. Even if it did, however, the administration’s climate change policy would make no noticeable impact.

According to Cato Institute’s “carbon tax temperature-savings” calculator, developed by climatologists, the U.S. could shut down its entire economy and reduce greenhouse gas emissions to zero and it would mitigate global temperatures only a few tenths of a degree Celsius over the next 85 years.

In fact, if all industrialized nations cut 100 percent of carbon dioxide emissions, temperatures would be only 0.352 degree cooler than if the emission levels remained the same.

States are fighting back, but Congress should assert its authority.

Last year, much of the Environmental Protection Agency’s onslaught of overregulation came under the pretense of addressing man-made global warming, or climate change. The regulations threaten the livelihood of miners and coal towns, and the availability of coal as a dependable energy source.

But another important legal front is the states’ challenge to global warming regulations on new electricity generating units. After the EPA issued a regulation under Section 111(b) of the Clean Air Act to control how much carbon dioxide may be emitted by new power plants, 23 states filed a lawsuit challenging the proposal.

According to the federal government’s Energy Information Administration, the average emission for a coal-fired power plant in 2014 was between 2,070 and 2,170 pounds of carbon dioxide per megawatt hour, depending on the type of coal used.

States certainly are justified in taking legal action, but it’s also time for Congress to rein in unelected and unaccountable bureaucrats at the EPA. Congress should pass legislation that prevents all agencies from regulating carbon dioxide and other greenhouse gas emissions.