Don’t Bring Empty Bottles Into Michigan, You Might Go to Jail 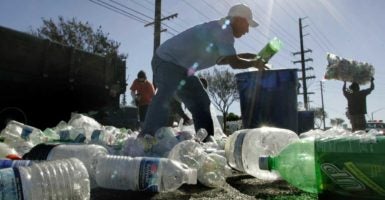 The phenomenon of overcriminalization puts all Americans at risk of being jailed for seemingly innocuous activities.

Around 10 p.m. on April 27, a Michigan state trooper pulled over Brian Everidge, who is from Michigan, for a speeding violation, looked into Everidge’s rental truck, and discovered some unusual cargo that led to a felony prosecution against the Michigan resident.

Everidge was hauling over 10,000 beverage containers from Lexington, Kentucky, to exchange the containers for a bottle refund, although he didn’t tell the trooper where. Michigan provides a bottle refund, but it also makes it a felony to return bottles from out of state—a clear example of overcriminalization.

Michigan law states that if one returns or attempts to return a bottle or can that “the person knows or should know was not purchased in [Michigan] as a filled returnable container” or “did not have a deposit paid for it at the time of purchase,” he is subject to a civil or criminal penalty that increases in severity depending on how many containers are involved.

If you attempt to cash in on 10,000 or more out-of-state containers, like Everidge allegedly did, it’s a felony, and could lead to up to five years in prison and a $5,000 fine.

Everidge’s lawyer, Marcus Wilcox, says the state “caught him too early,” that Everidge hadn’t violated the law when he was pulled over on the highway with his cargo of bottles and cans.

Using language that only a lawyer could love, or perhaps even understand, Wilcox argues that Evenridge “attempted to attempt to return the bottles,” and that  “this statute doesn’t fit” the circumstances. According to the trooper, Everidge “indicated during the traffic stop that he picked up the cans from Lexington, Kentucky,” and that “his intent was to return them,” but he “didn’t say where he was going to return them.”

While this defense may be a hard sell should the case go to trial, it may be even harder for state officials to explain why this conduct should be a crime in the first place.

At 10 cents a bottle, Michigan boasts the highest refund in the country, compared to the 2-5 cent rate available in most state refund systems. The state estimates that it has also lost $10 to $13 million annually due to people hauling out-of-state containers into Michigan to cash in on the refund.

To stem losses while maintaining state recycling incentives, Michigan lawmakers passed a law that required container manufacturers to put a unique mark on “Michigan cans and bottles,” and to sell those containers only in Michigan or other states with similar container refund systems.

Michigan also offered in-state dealers $5,000 to help pay for bottle counting machines with scanning technology to reject unmarked containers, but many businesses refused to upgrade their machinery. In 2012, the 6th U.S. Circuit Court of Appeals struck down Michigan’s bottle marking law as an unconstitutional burden on interstate commerce. Bill Nichols, who runs a market in Michigan 3 miles from Indiana (which offers no refund), said the technology was “not ‘100 percent fool-proof’” anyway, and he regularly “kicks out” Indianans toting “garbage bags full of cans,” seeking a refund.

Michigan has an interest in protecting its environment and shielding state coffers from nonresidents looking to take advantage of the state refund system, but criminal law and penalties are no better of a solution to their problem than the invalidated state bottle-marking law, or Nichols’ option (Michigan law also makes it a crime for state dealers to accept out-of-state bottles, so Nichols is right to turn away the can-hauling Indianans).

The felony bottle law illustrates the phenomenon of overcriminalization, the “overuse and misuse of the criminal law and penalties” to solve problems better addressed through the civil justice system.

It may be reasonable to assume that taking advantage of a state bottle refund system is illegal. It would also be reasonable to think that Michigan could adequately punish and deter Everidge’s conduct with, for example, a civil fine equal to or greater than the $1,000 he would have made off his 10,000 bottles had he actually returned them to a store in Michigan. But few would believe that such conduct rises to the level of the seriously morally blameworthy acts that deserves a criminal sanction—much less a five-year prison sentence.

That reflects what is “perhaps the most fundamental problem caused by overcriminalization,” as legal expert John Malcolm, director of The Heritage Foundation’s Meese Center, testified before the House Judiciary Committee, “the fact that the average person no longer has fair notice of what the criminal code makes an offense.”

This article has been updated to clarify that Brian Everidge is from Michigan.