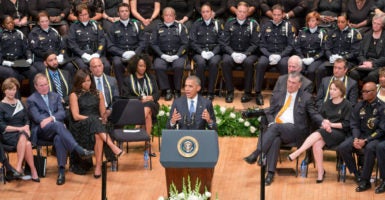 The White House struck back after a clean sweep of fact checkers criticized President Barack Obama’s assertion that it’s easier to obtain a gun than a book.

“With all due respect to the fact checkers, when the president delivered that line to a room full of about a thousand cops, there was not a lot of evident disagreement,” White House press secretary Josh Earnest told The Daily Signal at a White House press briefing.

“I think there is genuine concern on the minds of law enforcement officials who work in these economically disadvantaged communities about how readily accessible illegal guns are and, frankly, how hard it is for kids in that community to get access to a quality education,” Earnest added.

During the memorial service for five slain Dallas police officers who were killed in the July 7 shooting, Obama made the comparison between buying a gun and a book.

“We flood communities with so many guns that it is easier for a teenager to buy a Glock than get his hands on a computer or even a book,” Obama said, “and then we tell the police, ‘You’re a social worker, you’re the parent, you’re the teacher, you’re the drug counselor.’”

PolitiFact determined the comment was “mostly false.” The Washington Post Fact Checker gave Obama “Three Pinocchios,” while FactCheck.org was the most charitable, stating that Obama “simply goes too far in his analogy.”

Earnest said Obama was trying to address crime and lack of opportunity. The spokesman also took shots at Republicans.

“The point that the president was making is, rather than mobilize an effective policy response to that situation by increasing funding for schools or passing commonsense gun control legislation, too often, at least in this Republican Congress, those obvious solutions have been rejected, and as a result we’ve just asked law enforcement to deal with the problem,” Earnest said.

“This is typical of the Obama administration, defending something that is clearly false,”— @AmyHunterNRA

“We put law enforcement officers and police officers in a position where they’re the ones that have to be the director of the after-school program or the drug counselor or the mental health professional and that’s not fair,” he said, “particularly when you consider they’re trying to fight crime in a dangerous neighborhood.”

Public schools located mere miles from the White House are among the worst performing in the country. Obama, however, has opposed efforts to give parents and students an alternative through the D.C. Opportunity Scholarship Program. Obama has repeatedly tried to cut off funding for the program, which gives low-income families scholarship money to attend the school of their choice.

It’s somewhat ridiculous but expected for the White House to try to defend the comment, NRA spokeswoman Amy Hunter said.

“This is typical of the Obama administration, defending something that is clearly false after fact checkers have taken a look,” Hunter told The Daily Signal in a phone interview. “The administration is deflecting what they’re saying. It’s a lie. It’s not easier to buy a gun than a book. Various left-leaning institutions have said the same thing.”

None of the fact checkers gave Obama the most severe false rating, just second place. This is because each said studies have shown handguns are more available in poor urban areas, while these regions suffer from low-performing schools.

Each pointed out, however, that it isn’t literally true that it’s easier to obtain a weapon than to obtain a book.

Federal law prohibits licensed firearms dealers from selling a handgun, such as a Glock, to people under 21 years old. It prohibits unlicensed people, like family, from selling or transferring handguns to anyone under 18. In most states, you need to be at least 18 to purchase and own a handgun.

Public libraries, on the other hand, generally don’t have an age limit or a background check for children to get a library card and access books and computers for free.

This is a catchy talking point that people obviously paid attention to, but it doesn’t make much sense. Literally speaking, not all states allow people under 21 years old to buy a handgun. And as far as we know, there’s no minimum age or a background check required to get a book or use the computer for free at a public library.

Meanwhile, PolitiFact suggested Obama was making a broader point, but nonetheless found it off base.

There’s little doubt that in some lower-income and high-crime neighborhoods, it is strikingly easy for even teens to acquire a handgun. On this, there is ample anecdotal evidence.

But buying a gun is not likely to be cheaper than buying—or borrowing—a book or securing access to a computer, even for teens in poor neighborhoods. On multiple levels, Obama’s comparison is flawed. We rate it Mostly False.

Finally, FactCheck.org gets specific, citing a Pew Research Center study, and even information from the White House.

As for books, the White House sent us a recent Chicago Tribune article on a free 1 million book giveaway by the city’s public libraries to address what the paper called a ‘persistent lack of access to books in low-income neighborhoods.’ But that same article notes that the Chicago Public Library system has 80 branches—not to mention school libraries—so it should be far more easy for a teenage boy in Chicago to “get his hands” on a book than a gun.

Obama’s point about the availability of guns in some urban areas is well taken, but he simply goes too far in his analogy.

Obama has made similar comments a few times before.