The History of the United States, as Told by Young Democrats 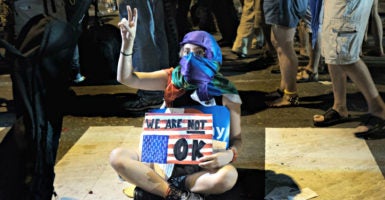 A protester expresses herself outside the Democratic National Convention in Philadelphia. (Photo: Christopher Occhicone/Zuma Press/Newscom)

PHILADELPHIA—Young Democrats appear to be part of the coalition championing that dictum from William Faulkner: “The past is never dead. It’s not even past.”

I expected the youth caucus meeting at the Democratic National Convention, which I attended Wednesday, to focus almost entirely on current liberal concerns such as student loans, jobs, LGBT issues, and climate change. (Given the near absolute lack of mentions of terrorism on the convention’s main stage, I wasn’t so naïve that I expected any talk about the Islamic State terrorists or national security.)

But this was no MSNBC event, and far from leaning forward, two of the three participants on a panel went on extended diatribes about the United States’ history to a room with enough empty chairs to satisfy an army of Clint Eastwoods.

Sitting about half a mile from Independence Hall, where the Declaration of Independence and the Constitution were signed, I got a whirlwind course in Liberal History 101.

Velasquez is the director of Young People For, a group that declares on its website that it is “taking a stand for progressive values.” Earlier in the event, Velasquez got enthusiastic applause after boasts of being “undocumented and unafraid” and “transgender and unashamed.”

Nor was the earlier statement the sum of Velasquez’s criticisms about the United States.

And we are tired, and we are tired because history continues to repeat itself over and over again. We are not seeing the change and we are being told to wait. And we don’t want to wait. We’re ready and we’re coming.

Velasquez then proceeded to tick off how long it had taken different groups to be able to vote in the United States.

“And some of us who are undocumented, let’s not forget, are still fighting for suffrage rights.” A protester flashes the peace sign to police officers across a barrier fence at the Democratic National Convention. (Photo: Christopher Occhicone/Zuma Press/Newscom)

Curiously—or perhaps not curiously, given that Eleanor Roosevelt is still enough in the good graces of the left to be given an enthusiastic shoutout by Meryl Streep on the convention’s main stage—there was no mention of the Japanese being thrown into internment camps by Franklin Roosevelt.

At any rate, I’m under no illusion that the history of the United States is free from injustice, immorality, and bad decisions.

But what was striking about the account Velasquez gave was, by my memory, the complete absence of any mention of the strikingly great parts of our country’s history. (And of course, the view that somebody who came to the United States illegally should not only be entitled to live here, but also to vote.)

It was unmentioned how the U.S. championed freedom, how our Founding Fathers created a government system that sought both to avoid mob rule and to push citizens to truly govern themselves, to have a government of, by, and for the people, and to have a founding document that recognized the equality of men.

There was no discussion of how the United States had promoted freedom abroad, and had helped other nations with both financial resources and our soldiers’ lives.  There was no consideration of how many immigrants had fled lands where opportunity was limited and found the United States to be a place where they and their children and their children’s children could truly live the American dream.

While Velasquez focused on the more distant past, another panelist offered a narrative (equally depressing) about the past few decades.

Nelini Stamp, who describes herself as an “organizer,” “agitator,” and “believer in community centered liberation” in her Twitter bio, detailed her views on past presidents:

Our parents saw [Ronald] Reagan, saw what happened, and then when … [Bill] Clinton gets elected, and everybody’s like ‘Oh, we’re here, this is amazing.’ And then we had  [George W.] Bush. Eight years of Bush. And we went to war. We started to prioritize Washington [over] … Main Street. In 2008, we bailed out the banks instead of breaking them apart and they stole 60 percent of the wealth of African-American communities.

But don’t think Stamp’s dislike of the banks bailout means she has any empathy for or interest in exploring the views of the tea party:

“If we don’t have a black liberation, black movement in this country … we won’t get anything accomplished,” Stamp added.

Nor was it just young Democrats who championed a narrative obsessed with America’s imperfections.

Sen. Cory Booker, D-N.J., who is 47, appeared at the event. Booker quoted “the late, great Langston Hughes,” a poet who flirted with communism at one point, to discuss America. Booker focused on these lines from Hughes’ 1935 poem “Let America Be America Again”:

The land that never has been yet—

And yet must be—the land where every man is free.

Whose sweat and blood, whose faith and pain,

Whose hand at the foundry, whose plow in the rain,

I say it plain

America never was America to me,

And yet I swear this oath—

“Let us swear that oath,” Booker concluded. “Let us stay strong in faith.”

Stamp also grounded her call to young adults in her historical perspective.

“We are the warriors and … the visionaries of the Great Society that people talked about in the past, of that New Deal that went unpromised for communities of color,” she said.

“So I think that the reason we’re going through this is because it’s just history leading up to this moment where we need to take it.”