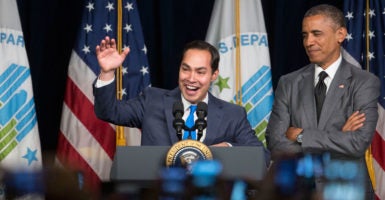 Top officials at the Government National Mortgage Association spent $3.9 million on a public relations campaign designed to create positive images for themselves, including a magazine piece on how one of them avoided obesity.

“The majority of the charges related to Ginnie Mae’s president, Theodore W. Tozer, and its former executive vice president, Mary K. Kinney,” the inspector general said. “This activity did not clearly meet the [rules] for allowable public relations and advertising costs.”

The inspector general added emphasis, saying, “Ginnie Mae guarantees mortgage-backed securities of government-insured loans. These securities are issued by approved private lending institutions … Therefore, media outreach initiatives to promote members of its senior staff, particularly articles that do not pertain specifically to the work of Ginnie Mae, may not have been reasonable or necessary.”

Ginnie Mae officials signed the public relations contract in 2011 with the Burson-Marsteller firm. They justified it by claiming that “instilling confidence in Ginnie Mae’s leadership, particularly its top staff, is especially crucial for a government corporation.”

Burson-Marsteller is part of Young & Rubicam, a PR giant that has received at least $75 million in federal contracts since 2008, according to USASpending.gov, including one with the Department of Veterans Affairs.

These are the same officials who hired a fake certified public accountant as chief financial officer and put him in charge of Ginnie Mae’s $1.5 trillion mortgage portfolio.

They also knew in advance that David Fender was fired from his previous job and lied about it on his Ginnie Mae application, but hired him anyway. He served as vice president and CFO from April 2014 to April 2015.

Ginnie Mae’s defense of the public relations contract is ironic, since spokeswoman Gina Screen repeatedly refused to answer questions about how the contract happened. Screen is paid $130,000 a year to deal with the media, so it’s unclear why both she and the PR company are necessary.

The inspector general pointed out that Kinney, the former executive vice president, telling Shape.com about “exercise and maintaining a healthy diet” does not show “that Ginnie Mae’s top leaders were capable and knowledgeable and could make financial decisions or informed stakeholders that Ginnie Mae had the appropriate leadership in place to efficiently execute the program.” The contract paid for “outreach to media outlets to position its president, Tozer, as an industry expert who could provide unique insights into the housing industry and economy.” Tozer was also trained “on the most skillful methods to answer inquiries,” according to Ginnie Mae. Building “confidence that Ginnie Mae’s top leaders are capable and knowledgeable and can make financial decisions is a crucial element of successfully meeting our mission.”

Screen did not respond to a request to interview Tozer about the public relations contract.

In addition to questions about the legality of the public relations contract, there was no documentation of some payments to Burson-Marsteller and improper documentation for other payments. The payments were made during the period in which Fender plunged Ginnie Mae’s bookkeeping into such chaos that the inspector general said $6.6 billion worth of entries couldn’t be audited.

The agency “approved [Burson-Marsteller] work orders without having proper written authority … file lacked documentation to support some charges, and the GTR’s [government technical representative] file did not show that it had completed contractor performance assessment reports.”

It also learned years ago that there were problems with payments to the company, but did nothing to improve, which is a recurring problem throughout HUD, but “HUD did not adequately follow up on the issues identified,” the inspector general said.

A 2015 inspector general report found that Ginnie Mae scarcely seemed to care if it had competent people running it. Fender’s “resume indicated no federal financial management experience. The deputy chief financial officer position has remained vacant as of January 2015, more than a year after the former deputy chief financial officer left; and the announcement for the controller position was not posted until January 2015, nine months after the former controller left.

“Ginnie Mae indicated that backfilling the vacancies was deferred temporarily to allow the new chief financial officer an opportunity to assess the organization and overall staffing needs. We question how this could be that executive management would not have already known its staffing skills and needs in such an important office.”