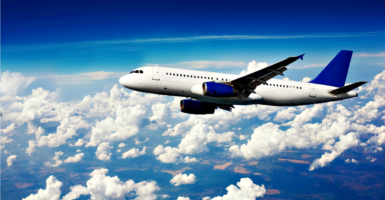 Like every other global warming policy, this one will hurt the middle class and poor the most and have next to no impact on global temperatures. (Photo: iStock Photos)

Flying used to be a luxury only the rich could afford. Advances in the airline industry making travel more efficient and affordable have expanded the mobility of hundreds of millions of Americans.

But a decision by the Environmental Protection Agency is likely to take air travel backward.

The EPA on Monday released a final “endangerment finding” that greenhouse gases from large commercial aircraft cause climate change and endanger “Americans’ health and the environment.”

It comes as no surprise that the Obama administration would reach to the skies and add airplanes to the list of its regulatory targets. The administration has been eager to regulate as many sources of greenhouse gas emissions as possible—including  cars, trucks, gasoline, and power plants, among others.

And like every other global warming policy, this one will hurt the middle class and poor the most and have next to no impact on global temperatures.

EPA first made the proposal last June as United Nations discussions to set international airline standards were underway and the Obama administration sought to create momentum for a climate agreement in Paris.

What kind of impact might these regulations have on global warming? Not much.

Even if one believes in catastrophic global warming, greenhouse gas emissions from the airlines are peanuts in the grand scheme of things.

Even as part of a larger international effort, the efforts by the EPA and the U.N. don’t add up to much. A draft of the first international standards, released in February by the U.N.’s International Civil Aviation Organization, is likely to be finalized in October.

Projections are underwhelming: The standards will reduce fuel consumption by 4 percent on average and lower global carbon dioxide emissions by 650 million tons over the course of 20 years. It sounds like a lot, except that 770 million tons were emitted in 2015 alone.

They’re “not worth the price of paper [they are] printed on,” according to Vera Pardee, an attorney with the Center for Biological Diversity, which advocates drastic cuts in carbon dioxide emissions.

Yet the Obama administration heralded the international  standards  as “an important signal that the international community is well-positioned to rise to the challenge of implementing a global market-based approach to reduce aviation emissions.”

The EPA said it “anticipates moving forward on standards that would be at least as stringent as [U.N.] standards.” In other words, the EPA has created its own legal mandate to regulate, all without the input of Congress.

In fact, even if the EPA under the next administration chooses not to act on the new endangerment finding, outside groups can sue the agency to “do its duty” under the Clean Air Act and force it to set regulations (as some groups already have done).

While the EPA has yet to propose regulations, it is likely they will come with a price tag, if the U.N. standards are any clue.

Like every other greenhouse gas regulation from the EPA, they would be a tax on energy use that necessarily gets passed on to the customer, in this case those who travel by air. And for no environmental gain.

Congress needs to step in and prohibit the EPA and any other federal agency from regulating greenhouse gases. Regardless of what ones believes about global warming, this finding and whatever regulations result will have no meaningful impact on global temperatures.