This Lawmaker Wants Bureaucracy to Stop Spending Your Fees and Fines 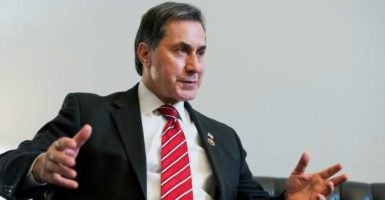 The House of Representatives has set its sights on reasserting congressional power that Republican leaders say has been slowly usurped over the years by courts and bureaucrats.

Rep. Gary Palmer, R-Ala., last month introduced legislation that may prove to be a key piece of that effort to reclaim power from what conservatives call the administrative state.

H.R. 5499 would require all federal agencies that collect money directly through fines or fees to deposit that money in the general fund of the U.S. Treasury.

Currently, agencies can spend collected money on their own departmental budgets, without any input from Congress.

Palmer said in an interview with The Daily Signal that this practice allows agency bureaucracies to ignore the will of Congress, making them less accountable to the wishes of the voters.

“When agencies have money like that … Congress really doesn’t have any oversight,” Palmer said. “The power of the purse allows us to exercise the constitutional oversight we’re supposed to have over all the agencies.”

Article I of the Constitution states that “no money shall be drawn from the Treasury, but in consequence of appropriations made by law; and a regular statement and account of the receipts and expenditures of all public money shall be published from time to time.”

By not reporting money to the Treasury in the first place, Palmer said, the federal bureaucracy creates a loophole that allows agencies to wriggle around both halves of this clause; the Constitution stipulates that appropriating money for agencies is the exclusive duty of Congress.

“By not having the money go to Treasury, and not going through the appropriations process, are we masking how much we actually bring in in revenue, and how much we’re actually spending?” he said, adding:

I’ve pointed out that it’s like having two sets of books: You’ve got a public set, which we budget, authorize, and appropriate to; then you’ve got another set where there’s a substantial amount of money that the agencies hold, which they use for other programs or other purchases.

The bill, with 65 original co-sponsors,  was referred to the Judiciary Committee’s Subcommittee on Regulatory Reform, Commercial, and Antitrust Law.

Palmer said his bill dovetails helpfully with the House’s larger mission, which would help it to move forward after  summer recess.

“The issue is that Congress has had its authority diminished by the courts and the executive branch,” the Alabama Republican said:

The voters didn’t elect us to be bystanders. They elected us to be their representatives, and, as you know, by design the Founders intended for the House to be the body closest to the people. That’s why we have to run every two years. They hold us accountable and responsible for exercising proper oversight, particularly over the purse, the Treasury.

Paul Larkin, a senior legal research fellow at The Heritage Foundation, said Palmer’s bill was a good solution to a serious problem.

“The system is set up so that only Congress can make these decisions, because members of Congress are elected every two or six years,” Larkin told The Daily Signal. “And it’s also set up that way so that you can avoid the corruption that can occur when a large bureaucracy, which consists of people who are not elected and unknown, can hand out taxpayer dollars.”